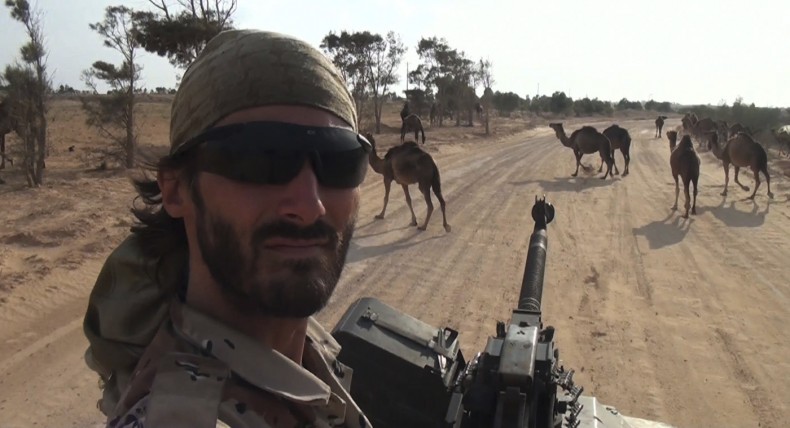 Point and Shoot covers some interesting ground and may inspire the travel-hungry, but ultimately fails to dig deeper and answer the challenging questions facing its subject at the end of his journey.

In three years and across 35,000 miles, 29-year-old Baltimore native Matt Vandyke changes everything (sort of). An only child of an only child raised on conquest video games and Lawrence of Arabia, Vandyke lives out his 20’s in his mother’s basement with no friends and a master’s degree with concentration in Middle East studies. Determined to escape his sheltered, dependent lifestyle, he leaves his mother and supportive girlfriend behind and embarks on an open-ended quest through the Middle East on motorcycle – a trip that will find him participating in the 2011 Libyan Civil War as an observer, and, eventually, a genuine rebel soldier.

Documentarian Marshall Curry (If A Tree Falls, Racing Dreams) pieces the footage of that cross-continental trip together here and conducts the interview that allows Vandyke to recall his experiences in the Middle East. While he first tests the waters by arriving in a stable region of Africa, filming a “travel adventure documentary” that’s more about shots of him doing wheelies on his motorcycle than any actual cultural enrichment, it isn’t long before he pushes things further by entering more dangerous territory. Vandyke likens his experiences at that time to a drug – building a quick tolerance and needing more and more to fulfill the adrenaline. He treks through Iraq and Afghanistan, visiting the site of Osama bin Laden’s death, being arrested for passport issues, and meeting Nuri, a Libyan with whom he becomes good friends.

When Vandyke hears Nuri’s stories of the growing Libyan revolution, he feels compelled to help and bribes his way into Libya to join the fight against Gaddafi’s long-standing regime.

Point and Shoot may be pitched as an unlikely traveller’s adventure in search of attaining manhood, but, more effectively, it is a study of how personal and historical truths are defined by the teller and shaped by the lens of a camera. The problem is that it’s not clear whether anyone involved in the film actually knows this.

There’s a real issue with the granularity of the storytelling here, because Point and Shoot is vague at all the wrong times. Curry offers no answers as to how Vandyke pays for this three year trip, how, exactly, he is detained in a climactic moment, and, later, how he escapes a prison. There’s frustrating questions left over in many segments due to the simple lack of details. As an interviewer, Curry doesn’t dig deep enough. Vandyke’s girlfriend, who patiently waits for him while he is on this journey, is interviewed, but isn’t prompted to respond to much more than questions with easy answers.

A whole lot of the 83-minute run-time is spent looking at Vandyke’s footage, and the big trend that emerges is that while it features footage all over the world, it’s kind of all about him. Vandyke’s admittedly spoiled childhood and early interest in conquest seem to come to fruition in this reckless journey that’s more cringingly self-centered than boldly adventurous. It’s not empowering so much as troubling.

Vandyke, with this trip, is interested in projecting a persona that embellishes traits he likes, hides those he doesn’t, and invents entirely new ones to compensate for his perceived shortcomings. Tourism is often a safe space to experiment with alternative selves – “What if I was this kind of person?” – but Vandyke’s interest in projected image goes far beyond trying out a one-night-stand in Rome.

He takes on a new, action-hero name: Max Hunter. As he becomes embroiled in warfare with the Libyan rebel forces, he continues to hold an obsession with controlling the camera – positioning it to best capture him holding and firing weapons. The other rebels do it, too – posing for the camera with the military equipment they’ve only just learned how to use. “Everybody wants something to share on Facebook,” he jokes, but seems unaware of the increasingly outrageous lengths he goes to continue fighting for this cause.

Empathetic viewers will find an interest in understanding Vandyke’s psychology. As someone who suffers from obsessive-compulsive disorder, he undergoes unavoidable exposure therapy by way of filthy hostels and all-around lower levels of hygiene than what he is used to. This subplot, unfortunately, reaches no conclusion, and Curry doesn’t seem to push for answers on how these experiences have helped his disorder (Vandyke briefly mentions that it did help, but is also seen interrupting the interview to vigorously wash his hands).

Back safely in the United States and reflecting on this journey that lands him in a Gaddafi-controlled prison cell for more than five months, the conclusion to Curry’s film comes without much satisfaction. Taken through this progression of a man-boy turned soldier, we’re desperate for any revelation but get none. Has he matured? How has this experience affected him?

The footage suggest complexity, but I’m not convinced Curry as a director is even picking up on the tragic narcissism of his subject. Point and Shoot provides a medium for Vandyke to showcase his footage and adventure, but it does little to challenge him and leaves too many questions unanswered to succeed as a biographical piece. Curry is celebrating Vandyke’s actions with inspirational montages scored by The National when he should be staging an in-depth investigation of human behavior as it relates to technology and war. And with Vandyke so completely in control of the film’s material (he first suggested co-directing it after reaching out to Curry with his idea for the film), you can’t help but wonder how much of the reality Vandyke presents is, like those rebels playing soldier in front of the lens, crafted to match a desired image above absolute truth.

END_OF_DOCUMENT_TOKEN_TO_BE_REPLACED
Taylor Sinople Picks: The 16 Best Films of 2016
Form and Function in Alex Ross Perry’s “Queen of Earth&...
Digging for Fire and Unexpected: Husband and Wife Process Parenthoo...
Every Thing Will Be Fine 3D Review