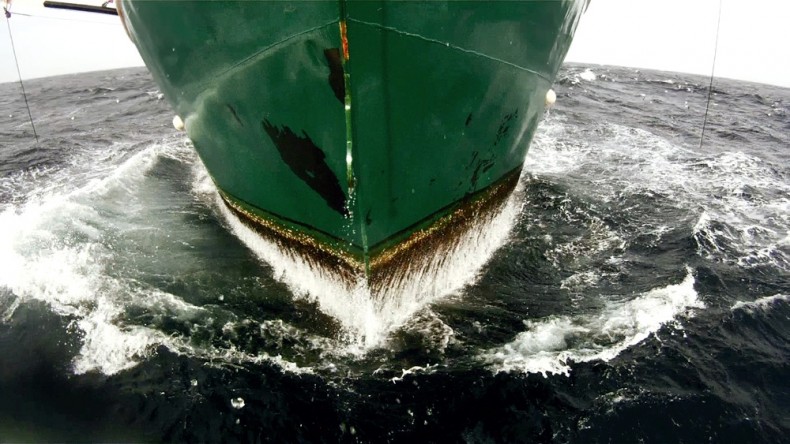 LEVIATHAN noun (in biblical use) A sea monster, identified in different passages with the whale and the crocodile, and with the Devil.

Beautiful, horrifying, and one of the strangest films I’ve ever scene: “Leviathan” is –of all things – an abstract fishing industry documentary from directors Lucien Castaing-Taylor (“Sweetgrass”) and Verena Paravel. It is highly experimental, features the most visceral imagery ever put into a documentary, and is also exceedingly tedious – rewarding only to the viewer that can be content appreciating film as art.

If this has grabbed you, I highly recommend looking into this one as little as possible; it’s a one-of-a-kind experience that needs to happen in the disorienting darkness of a theater. If a non-linear experiment in the power of the visual story doesn’t quite sound like your cup of tea, read on for the full analysis.

“Leviathan” puts the viewer onto a North Atlantic fishing trawler to observe the boat, its inhabitants, and the grotesque procedures involved in large volume fishing. That is the basis for the film, at least. What would generally follow with a documentary is a history lesson about the industry, narration from the filmmakers, an introduction to the characters featured, and some sort of arch to guide the viewer along in a dramatic, constructed story. None of these are present in “Leviathan”. No narration, no to-camera interviews, no explicit story. In fact, there is no filmmaker presence felt at all in the film. It is as if the footage is being captured on accident, from webcams that are always recording.

In reality, the filmmakers used tiny GoPro HD cameras strapped around the boat, left simply to observe and for the fishermen to interact with. The cameras capture the magnitude of the sea – plunging underwater, soaring into the sky with the seagulls following the trawler for scraps. They capture the simultaneously dangerous and mundane lives of the fishermen.

This is the extent of the content inside the film – uninterrupted takes of up to five or six minutes. Sound design features long segments of crashing waves, squawking birds, and grinding machinery along with a menacing score straight out of a horror movie. The pacing is hypnotic. The whole thing is incredibly creepy.

The hands-off approach by the filmmakers leave you to create your own story, to take what you want out of the film. It belongs to a sub-genre of documentary – an observed reality art piece.

As beautiful as the cinematography is, the difficult part of the experience is the overwhelming boredom that can accompany some portions of the already lean 90-minute film. There will be many times where you won’t even be sure of what you’re looking at, and others where you’ll watch the fishermen crack open clams for five minutes straight as if to give you just a taste of the monotony of their lives.

The result is a film that is stunning, but not always captivating. I checked my watch many times. It is the sort of film you will enjoy having seen, even if you don’t enjoy actually watching it.

As is often the case with filmmaking, not much about the presentation of the final product is an accident. After viewing the trawler passing over the sea – taking along with it thousands of fish to be gutted and harvested, the remains dumped back into the water – it is clear the title of “Leviathan” is not one such accident.

Taylor is a Chicago-based writer and aspiring film historian. He is the editor here at TFP, and has contributed to a number of international publications such as Cinema Scandinavia, PopMatters, and Room 101 Magazine. He can also be found listening to podcasts, researching topics he has little use for, or running after a city bus.
You might also like
leviathan

by Zack Miller on June 2, 2014
The week of May 25 brought Leviathan, Escape from Tomorrow, Run & Jump, and more to Netflix Instant streaming.

END_OF_DOCUMENT_TOKEN_TO_BE_REPLACED
Taylor Sinople Picks: The 16 Best Films of 2016
Form and Function in Alex Ross Perry’s “Queen of Earth&...
Digging for Fire and Unexpected: Husband and Wife Process Parenthoo...
Every Thing Will Be Fine 3D Review