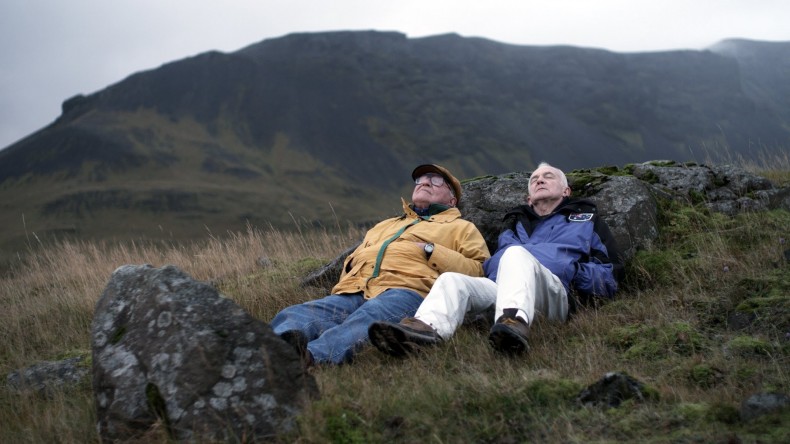 Well acted but lacking any memorable punch, "Land Ho!" is a divisive road trip comedy that's easy to like but difficult to love.

Two [sixty year old] [ex-brother-in-laws] travel to [Iceland] and reconnect with [their youth] in [“Land Ho!”].  Co-directors Aaron Katz and Martha Stephens may just be filling in the road trip movie ad-lib, but they nonetheless offer a fresh, sympathetic spin on a popular genre.

Weary with life after retirement, Mitch (Earl Lynn Nelson), a raucous horn-dog, drags along his old buddy Colin (Paul Eenhoorn) for a Nordic trip in search of a bit of adventure. Somewhere between a visit to the natural hot springs and getting lost at night in the Icelandic fields outside their hotel, Mitch and Colin rediscover a life they were ready to leave behind. It’s about what you’d expect from two 30-somethings writing about the elderly experience.

Earl Lynn Nelson plays one of the standout characters of the year as Mitch. A plastic surgeon and Stephens’ second cousin in real life, Nelson is a nonprofessional actor and gives the assured, honest performance of someone without the tools or reference points to gauge their own skill level. Seemingly without much conscious effort, Nelson dominates the screen – drawing laughs from every line delivery: “Well, ‘when in Rome’…you know how that is…”

The trouble with Mitch, though, is that despite how well-realized he is, he’s frankly one of the more annoying characters to lead a film this year. He’s an Alexander Payne character that Payne would have had the restraint to use in a supporting part. A relentless likening of everything in his environment to sex, and an uncomfortable level of creepiness regarding every younger woman in the film make Mitch a grating presence, even in contrast with the much more gentle-minded Colin.

As Colin, Eenhoorn (“This Is Martin Bonner”) brings a lifetime of professional acting experience to the screen. Despite being the far less “character-y” of the two, Eenhoorn actually has the more difficult part as the listener and reactor to Mitch’s obscenities.

The two are at their best when both contributing to a conversation, like when visiting an art gallery and sharing their interpretations of the paintings. But to the displeasure of an audience that’s not completely with Mitch’s comedy, the majority of the screenplay is a lot of steamrolling through a juvenile characterization of an older man.

In fact, many of Katz and Stephens’ choices can be a bit at odds with their story. The visual style seems motivated by whatever the cinematographer, Andrew Reed, was feeling like doing at the moment. Some scenes are captured in a handheld doc style, but then there’s a bewilderingly placed and very long zoom-in by way of Wes Anderson stuck in the middle of the film. There’s a spectacularly captured nighttime scene lit only by glow sticks, and then there’s a shot truly ruined by a massive lens flare. What gives?

Fortunately, there’re enough winning moments in “Land Ho!” to make the journey worth it. Colin eventually meets a female Canadian traveler (Alice Olivia Clarke) that finally upturns his reserved personality, and this moment is followed by a small redemption for Mitch that really works.

Despite it’s enjoyability, though, the fact that most of the dialogue doesn’t add to any of the world’s universal discussions may lead the film towards being a somewhat forgettable effort. With David Gordon Green acting as an executive producer, it’s clear that “Land Ho!” is a supported and worthwhile film, but it’s still a few steps away from becoming more than a solid warm-up act to the genre’s best.

END_OF_DOCUMENT_TOKEN_TO_BE_REPLACED
Taylor Sinople Picks: The 16 Best Films of 2016
Form and Function in Alex Ross Perry’s “Queen of Earth&...
Digging for Fire and Unexpected: Husband and Wife Process Parenthoo...
Every Thing Will Be Fine 3D Review