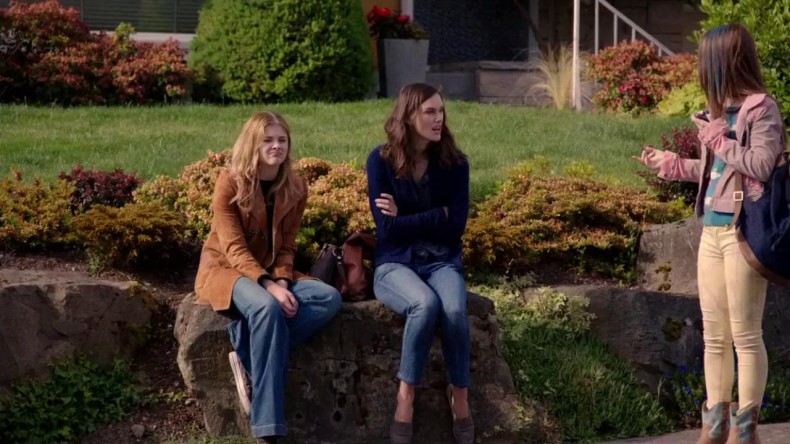 Featuring a refreshingly low-key performance by Keira Knightley, and a noticeable spike in visual and thematic maturity, “Laggies” is director Lynn Shelton’s best work yet.

The mumblecore movement of the late-2000s was responsible for producing some of the most unique voices in independent cinema since the Miramax-revolution of the mid 90s. From the comedy (The Duplass Brothers) to the horror (Adam Wingard, Ti West) and everything in between (Joe Swanberg, Alex Ross Perry, Ry Russo-Young), mumblecore was the American digital era’s answer to the French New Wave, often employing similar characteristics like natural lighting, improvised dialogue, and the casting of non-actors.

However, after buying a tripod and casting a few A-listers, mumblecore has gone mainstream. Lena Dunham has a hit HBO show. Both of the Duplass brothers star on extremely successful, and critically acclaimed, cable comedy shows. Wingard’s 2013 film “You’re Next” played on nearly 2500 screens. Those who skated by on the seemingly low-effort and low-cost formula that made mumblecore so appealing to young filmmakers are now being shown the door, as the burgeoning directors of last year become the award-winning trailblazers of today.

Among those who are still carving out a niche for themselves in the mainstream is Lynn Shelton, whose hilarious breakout third feature, “Humpday,” was followed by a handful of middling and underdeveloped projects, like “Touchy Feely” and “Your Sister’s Sister,” that never quite captured the spirit or quality of that film. But Shelton’s latest film, “Laggies,” which follows a compulsive procrastinator as she tries to sort her life out for the first time ever at the age of 28, may be her best yet.

“Laggies” stars Keira Knightley as Megan, a beautiful and charming woman who, ten years after high school graduation, is still deeply invested in a transitional period. Megan has dated the same guy and hung out with the same group of girls since she was a teenager, and she can’t help but feel like her life is never going to amount to anything. Her boyfriend, an endlessly positive photographer named Anthony (Mark Webber), proposes to Megan at her friend’s wedding, prompting her to literally run away in search of an errand to take care of or a place to hide.

When Megan is tasked with setting up the hotel room for the bride and groom, she runs into a group of teenagers outside the supermarket where she’s gone to buy rose petals. Instead of returning to the hotel as planned, Megan agrees to buy the kids a couple drinks, and ends up spending the entire night with them. In particular, Megan connects with a 16-year-old girl named Annika (Chloë Grace Moretz), who gives Megan a stolen phone to contact her at any time.

Upon returning home, Megan lies to Anthony, telling him that she’ll be going on a week long self-help retreat in the boonies. Instead, she hides away at Annika’s house, hoping to go undetected by Annika’s lawyer father, Craig (Sam Rockwell). Her attempts are unsuccessful, but Craig allows Megan to stay after hearing her story and deciding that she is neither a serial killer nor a kidnapper. Craig and Megan form a connection of their own, and things become complicated when Megan becomes more deeply invested in their lives than she had initially anticipated.

Its concept is pure sitcom, but where most films falter in their middle third and limp weakly into a forced and convenient conclusion, “Laggies” uses its time to work with some truly original ideas. The script, written by author Andrea Seigel, has the density of a novel and does more with its characters in 95 minutes than most do with three hours. The implausibility of the film’s set-up is charming in its own right, but Shelton’s film soon becomes a surprisingly powerful statement on maturity, family ties, and establishing true connections in an increasingly impersonal age.

Keira Knightley, who is known for performing mostly in period pieces, does a complete 180 as Megan, completely shedding her classical persona to give one of the strongest performances of her career. Infused with the perfect balance of carelessness and perpetual self-doubt, Knightley finds the truth about what it means to be young, scared, and unsure of the future. As her teenage companion, Moretz gives a refreshingly low-key performance, finally working with a substantial character who isn’t trapped in high-concept malarkey like “If I Stay,” “Kick-Ass 2,” or the recent “Carrie” remake.

Sam Rockwell is reliably hilarious as Annika’s single father, but Shelton utilizes him to his fullest potential, offering him the opportunity to play a well-developed and dramatic role that most directors just don’t seem to be interested in. Watching Rockwell illuminate the screen in comedies like “Seven Psychopaths” and “The Way Way Back” is entertaining enough, but his portrayals can sometimes feel repetitive and one-note. His work in “Laggies” opens as charmingly as one would expect, but, like the movie itself, becomes a device to dig for something real and true and, most importantly, distinctly human.

And this is exactly where Shelton has always thrived. As an actor’s director, Shelton has always had an innate ability to pull excellent performances from her cast, but some of her previous films display an obvious neglect to the narrative aspects of the film, often resulting in a string of good performances without a movie to support them. “Laggies” presents no such conundrum, and the result is not only one of the best post-mumblecore films to be released, but also one of the best films of the year.

Credit must also be given to editor Nat Sanders, who recently won an Independent Spirit Award for his work on Destin Daniel Cretton’s “Short Term 12.” Sanders has worked with Shelton since “Humpday,” and their collaboration on “Laggies,” the third so far, is undoubtedly their best yet. Each scene of this film is impeccably cut, and Shelton maintains a consistent, engaging, and well-regulated tone for every frame of the film’s running time. He is soon becoming a master of the edited frame, and his work here is nothing less than Oscar-worthy, though it would be unwise to expect any attention in this year’s nominations.

“Laggies” represents some of the best that the independent romantic comedy has to offer. Nearly everything about Shelton’s film works wonderfully, and even the most skeptical viewers will be forced to admit that, for everything that it isn’t, “Laggies” is an honest, hilarious, gorgeously filmed, and beautifully conceived tribute to the age-old transition from youth to adulthood, and finding a place that feels like home.

Josef Rodriguez is a writer, filmmaker, and musician living in New York City. He is often labeled as "that guy who didn't love Boyhood" and he finds himself liking Harmony Korine films more than he likes his own friends. When he's not stressing over turning in reviews on time, Josef can be seen playing guitar, watching "Spring Breakers," or trying to write the next great American movie.
You might also like
Chloë Grace MoretzEllie KemperKeira KnightleyLynn Shelton

by Taylor Sinople on October 10, 2014
Maria, an internationally esteemed actress (Juliette Binoche), is asked to join the cast of the stage production that first made her famous, but this time as the older mentor character that is taken advantage of by a younger employee (the role she first played). Olivier Assayas (who directed the exquisite “Summer Hours”), as he does […]

END_OF_DOCUMENT_TOKEN_TO_BE_REPLACED
Taylor Sinople Picks: The 16 Best Films of 2016
Form and Function in Alex Ross Perry’s “Queen of Earth&...
Digging for Fire and Unexpected: Husband and Wife Process Parenthoo...
Every Thing Will Be Fine 3D Review