Reviews
0
previous article
Review: Girlhood
next article
A Fresh Look at : For a Few Dollars More (1965) 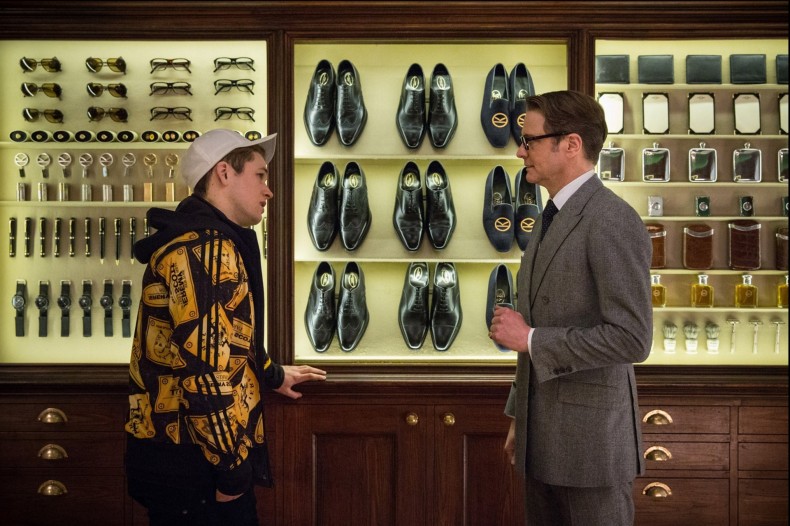 Although its wanton violence is an arguable contradiction to many of its core themes, “Kingsman: The Secret Service” is a fun, hilarious, and stylish action extravaganza from one of the most creative voices working today.

Nobody makes films quite like Matthew Vaughn, and he’s one of the few action directors working today who knows how to cultivate an experience worthy of the big screen. His 2010 adaptation of Kick-Ass still stands as one of the best examples of how to turn a graphic novel into a film, and his latest cinematic collaboration with Mark Millar, Kingsman: The Secret Service, definitely deserves a spot on that list.

In modern day London, a top secret organization known only as Kingsman has successfully prevented threats to human safety on both a national and global scale since the end of World War I. Its leader, Arthur (Michael Caine), has compiled a group of the world’s best agents, including Merlin (Mark Strong), Lancelot (Jack Davenport), and Galahad (Colin Firth). However, when Lancelot is killed on a solo mission, it’s time to recruit a new Kingsman, a process that occurs when each of the Kingsman nominates an individual whom he or she thinks would make a valuable addition to the team.

Among the many promising candidates is Galahad’s nomination, a young, troublemaking chav known by the moniker Eggsy (Taron Egerton), whose own father met a similar fate when he was a Kingsman 17 years prior. Eggsy and the others train to find out who will make the newest Kingsman while a billionaire entrepreneur, Valentine (Samuel L. Jackson), is finalizing production for his greatest invention yet: a mysterious SD card that, when installed into the phones of users around the world, will offer free internet and free service forever, for everyone…along with the key to global domination.

Anyone familiar with a Matthew Vaughn experience can kind of know what to expect when walking into Kingsman, the director’s fifth feature and fifth adaptation of a popular source material. Working within the realm of the graphic novel once again, Matthew Vaughn delivers a visceral punch-in-the-nuts to the action/spy genre while also crafting a work of surprising emotional heft. Brilliantly performed by every single member of the cast, with action that is shot and choreographed to absolute perfection, it’s no exaggeration to say that some of the film’s most exciting moments are nothing short of orgasmic.

However, Vaughn is able to seamlessly navigate both the bloodier and the more sensitive aspects of his film with ease, and while Kingsman doesn’t always pack the intimate, gritty punch of Kick-Ass – some of its London slums scenes are just a little too neat – it does right to ground itself firmly in the pursuit of its characters. Eggsy is characterized wonderfully both by Vaughn’s script and the breakout performance by Taron Egerton, who holds his own against veterans like Colin Firth and Michael Caine, who, it should be noted, both do some of the best work they’ve done in years.

Firth hasn’t been this charming or physically imposing in ages, while Caine, whose entire performance is given from a seated position, is actually rather convincing as the head of a top secret spy organization. After seeing him be completely underutilized in Nolan’s Batman films, it’s nice to see Vaughn do exactly what it is we’ve always loved seeing Michael Caine do. He’s a bona fide badass who barely has to lift a finger, and his presence is all the more menacing for it.

Samuel L. Jackson also puts in some great work here as a twisted billionaire with an aversion to anything bloody. Planning to ruin the lives of billions without the ability to even spot a drop of blood, Jackson reminds audiences why we fell in love with him in the first place, and that million-dollar smile paired with a debilitating lisp embodies only an ounce of the personality he brings to this character. He’s clearly relishing the opportunity to try something new, and the result is phenomenal. As his second-in-command, Sofia Boutella is both sexy and terrifying as Gazelle, a femme fatale of sorts with blades for feet.

It’d also be a massive injustice not to briefly mention Mark Strong, who is irresistibly charming as Merlin, one of the Kingsman who trains Eggsy and the other candidates. Strong is one of those British actors who shows up in every film set in London, yet he’s never the protagonist, he rarely gets any recognition, and he never has enough screentime to make a lasting impression. Hopefully, that will all end today. Strong is absolutely a scene-stealer amongst scene-stealers here. It’s arguable that nearly every character in this film would be the fan favorite in any other film, and the ballet of violence and one-liners that explodes from this movie is nearly overwhelming.

But somehow, without having to wave his arms or raise his voice, Strong arises as the victor, charming the pants off of every single member in the audience. There are aspects of this film that, all cliches aside, words cannot express. Warts and all, Kingsman is, thus far, the best film of 2015, but Strong’s performance may be the best of the year as well, and time will tell if he can tussle with the best of them for the remaining 11 months. I think he can.

It also seems worth mentioning that, thematically, Kingsman is one of the more interesting films in recent memory. It goes without saying that Vaughn doesn’t skimp out on the intelligence factor of his seemingly mindless carnage, but Kingsman tackles themes of greater relevance and importance than any of the director’s previous films. Vaughn has always done his best to illustrate the connection between the old and new schools of thinking, as evidenced by the juxtaposition of the classic superhero archetype with the digital age in Kick-Ass, as well as the retro setting of X-Men: First Class, but with Kingsman, Vaughn discusses an issue that hasn’t been brought up much in recent mainstream action fare, that of change.

While most blockbuster action movies are content to allow their villains to level a city for “the greater good,” the villains of Vaughn’s film fulfill the only necessary requirement to craft a good antagonist. Simply put, Valentine is the hero of his own story, and rightfully. His idea of embracing change is not dissimilar to Galahad’s, but where one involves reducing the population to less than a million people, the other’s is about teaching the youth about the proper values of a respectable human being while not turning a blind eye to the idea that the world is, in fact, changing, and we should treat it as such.

And like it’s easy to write a shallow villain, it’s almost easier to create a film that is, in this day and age of constant change, inherently technophobic. And while Vaughn’s film sets itself up to align with that set of values, it acknowledges the importance of change, both technical and otherwise, in a world that demands it. That Vaughn has the courage to make this statement – along with a couple of other unbelievable set pieces that won’t be mentioned here – makes Kingsman one of the year’s bravest, boldest, and best films so far.

Josef Rodriguez is a writer, filmmaker, and musician living in New York City. He is often labeled as "that guy who didn't love Boyhood" and he finds himself liking Harmony Korine films more than he likes his own friends. When he's not stressing over turning in reviews on time, Josef can be seen playing guitar, watching "Spring Breakers," or trying to write the next great American movie.
You might also like
colin firthKingsmanKingsman: The Secret ServiceMark Strong

by Taylor Sinople on July 24, 2014
Woody Allen, sharp as ever, is having more fun than ever with "Magic in the Moonlight," a small but well-constructed film about real-world magic.
Comments
Leave a reply
Add Comment Register

END_OF_DOCUMENT_TOKEN_TO_BE_REPLACED
Taylor Sinople Picks: The 16 Best Films of 2016
Form and Function in Alex Ross Perry’s “Queen of Earth&...
Digging for Fire and Unexpected: Husband and Wife Process Parenthoo...
Every Thing Will Be Fine 3D Review