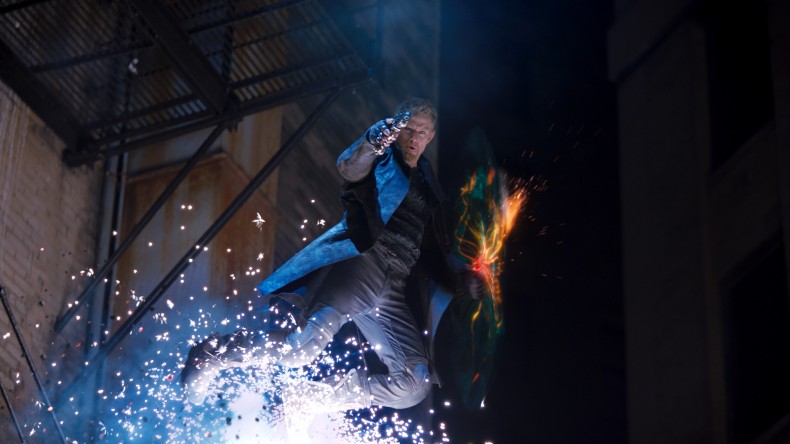 A lifeless and insipid sci-fi clutter starring two very uninteresting leads, "Jupiter Ascending" sees the Wachowskis full of creativity and ambition but completely lacking in both story and sense.

Out of all the film genres, science fiction has the most potential to turn wild and wonderful ideas into some outrageously ridiculous films. The Wachowski siblings are well aware of this: The Matrix was an out-there idea that became a visually cool and somewhat clever film; and Cloud Atlas deserves credit where credit is due for attempting to bring some artistry and sincerity to a genre filled to the brim with spaceships, robots, and explosions. Jupiter Ascending however, is quite the different story.

We are introduced to Jupiter Jones (Mila Kunis), a Russian immigrant (without a hint of a Russian accent) who is trying to make ends meet through cleaning the toilets of the rich somewhere in Chicago. For a little extra cash, she is encouraged by her cousin to freeze her eggs, however the procedure brings her into contact with alien hit-men employed by Lord Balem (Eddie Redmayne), heir to his family’s dynasty. Jupiter apparently possesses the genetic makeup of their late mother, that is, she is the reincarnation of the Queen of the Universe, and thus is due to claim ownership of her section of outer space. Unfortunately for her, there are forces in the universe that would rather see her dead rather than become a complication in the intergalactic game of space capitalism. So with assassins out hunting Jupiter we get Caine (Channing Tatum), a Kyle Reese type character in a pair of hover boots, to keep her safe and unharmed.

The format of the film is cyclical: generic fight scene, exposition, forced romance, rinse and repeat. This, needless to say, tires quickly. The Wachowskis offer up one action sequence after another, with not a single one feeling unique in any way, and some playing out too similarly to the one directly prior. To make things even more tedious, much of the action is delivered with a “But will they make it?” arbitrary countdown. They attempt to try and slip in the hefty explanations without coming across as too forced, but the Dune-esque hierarchy of nobility, allegiances and subjects can be unnecessarily confusing. No time is given to the audience to fully appreciate what is at stake, or to allow the eye to absorb what were some potentially impressive visuals. The Wachowskis like to think big and Jupiter Ascending is no exception, however here they really needed to let their grand designs take a back seat to the plot.

There is a welcome underlying feminist theme that the universe would benefit from a matriarchal society, however this falls flat as Kunis’ clueless character is little more than rescue-fodder, with Tatum coming to her aid more often than not. Merely a puppet and observer to the events of the film, she need only ask the necessary “What is going on here?” and “Who are you?” questions, as she stumbles through the movie unable to tear her infatuated gaze away from Tatum s half-man half-wolf character. With less than no spark between them, it is difficult to get on board with the romantic aspect of the story. At least Redmayne s exaggerated, whispering villain is a small step outside of convention.

Jupiter’s family is a painfully stereotypical rendering of constantly bickering Russians that have little purpose in the film, we have side characters who simply switch allegiances and betray their friends without a comment from anyone, and an entire act that relies on an evil prince named Titus (Douglas Booth) who wants nothing more than to marry our leading lady for her power. Balem is in competition with his two younger siblings Titus and Kalique (Tuppence Middleton), both of whom play a large role in the film until they disappear altogether. Abdandoned characters and abandoned subplots, sadly, are rife in this picture.

Fundamentally, Jupiter Ascending never fully emerges from its sci-fi influences in order to lay out fresh territory. If only the Matrix directors (still their best film fifteen years on) fully embraced the somewhat “campy” nature of its story in a Guardians of the Galaxy type fashion then this could have at least been an entertaining ride.

Jess is a 21 year old university student studying English Literature. Born and raised in England, she's an aspiring writer and film lover, with a strong affinity for cats.
You might also like
Channing TatumDouglas BoothEddie RedmayneSean Bean

by Josef Rodriguez on June 15, 2014
Although “22 Jump Street” sometimes feels like jokes in search of a movie, the self-aware humor and chemistry between its two leads keep the film from going off the rails.

END_OF_DOCUMENT_TOKEN_TO_BE_REPLACED
Taylor Sinople Picks: The 16 Best Films of 2016
Form and Function in Alex Ross Perry’s “Queen of Earth&...
Digging for Fire and Unexpected: Husband and Wife Process Parenthoo...
Every Thing Will Be Fine 3D Review