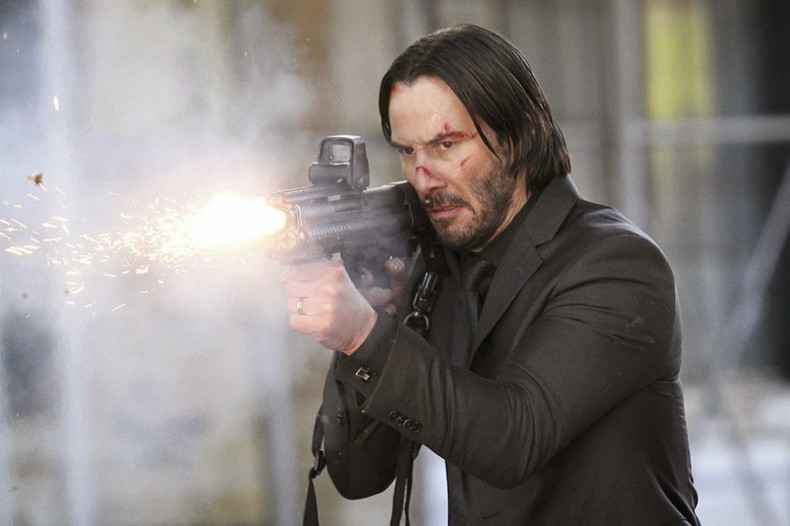 Despite some clever world-building, “John Wick” is a rather lame and unnecessary entry in the retired-hitman-does-one-last-job genre, wasting a fairly strong cast in the process.

An aging hitman, a dead wife, a couple hundred Russian mobsters, and a lot of guns. The elements of “John Wick” are those that we’ve seen many times before. Like masked killers in a horror film or a four-friends-and-a-couch sitcom, these tired action tropes can be, in the right hands, rather transcendent in a way that reminds us why we love them in the first place. But in a film like “John Wick,” where plot points are literally and figuratively thrown across the frame, they remind us why they should, at some point, get thrown in a box, locked in the attic, and forgotten.

“John Wick,” which, let’s be honest, probably should have been called “The Last Rites of John Wick,” stars Keanu Reeves as the titular character, a recently widowed ex-hitman who, upon receiving a posthumous gift from his wife in the form of an adorable puppy, is driven to murder an entire mob family after the adorable puppy in question is brutally murdered by a group of Russian thugs. The assailant of said puppy is the son of Viggo Tarasov (Michael Nyqvist), the biggest and baddest Russian in all of New York City. When word gets out that his idiotic son Iosef (Alfie Allen) has robbed Wick of the only thing he loved in the world, he prepares an army of henchmen to take out a man who, in his words, “killed three men with a fucking pencil!”

Of course, Wick is well-prepared and has no issue demolishing Tarasov’s first few waves of baddies, getting closer to the source when he checks into the Continental, a specialized hotel where no “business” is to be conducted under any circumstance. It’s there that Tarasov offers a bounty of $4 million dollars to any assassin who can successfully break hotel policy and take Wick out before he gets to kill Iosef. Confronted by a host of former accomplices, Wick must battle the world’s greatest assassins so he can exact revenge on the entitled, spoiled little bastard who murdered his puppy.

In theory, “John Wick” should be the most fun anyone’s had at a movie theater all year. Of course, any action film has some pretty lofty expectations to live up to now that “The Raid 2” has essentially dominated any possible competition. However, anyone even expecting a relatively decent shoot-em-up should probably look elsewhere, as “John Wick” is a very bad movie – almost, at a certain point, beyond comprehension. Boasting one of the year’s worst scripts, and even shoddier editing, “John Wick” does itself no favors by looking and sounding like it was slapped together by a couple of rich college kids with far too much beer and time on their hands.

There’s something so unbearably fratty and phony about the way “John Wick” was made, it feels cosmic. It’s as if someone who just moved to the United States was asked to write an extremely American movie, and did so by just watching a ton of Steven Seagal movies, proceeding to write the film with no knowledge of the culture, the language, or any facet of American life beyond what was exhibited on the screen. As a result, the film feels otherworldly in all the wrong ways, and the somewhat clever world-building (discerning viewers may notice a street sign that says 8411th St. in the background of one scene) still doesn’t excuse the fact that “John Wick” is both entirely insane and little more than a poorly compiled mishmash of other, better action films.

No one will ever mistake Keanu Reeves for the world’s greatest thespian, but he’s always displayed a certain irresistible charisma that’s carried him through his best and worst performances. However, “John Wick” rarely allows him to do more than grimace in a general direction and mumble the few lines he does have, which are almost entirely expository or used to move the plot forward in obvious ways. When he finally does have the chance to emote, the monologue he sprays out is an unfathomably hackneyed hodgepodge of words that had me on the verge of a nervous breakdown.

And while we’re on the topic of things that should never be in a movie, let’s take a moment to appreciate Michael Nyqvist’s horrid performance as New York’s biggest mobster, and presumably New York’s greatest consumer of Cortisone cream. Make no mistake, Nyqvist is a talented guy, and he’s proven himself to be capable of successfully performing heavy material, but his work in “John Wick” has me convinced that he was receiving an invisible colonoscopy anytime the cameras were on. He quite nearly chokes to death on his own words multiple times, and makes facial expressions that should only be necessary during some kind of anal hemorrhagic fiasco. I’m sure there was someone on-set pointing a gun at his wife and child through the duration of filmmaking because he so obviously just does not want to be there.

But, to give credit where credit is due, Alfie Allen does turn in a fantastic performance as Tarasov’s cocky, over-eager son. Allen takes a pretty standard gangster archetype and turns it into something fun, silly, and intriguing, which “John Wick” so desperately needed to be. His performance is generous, often allowing the other actor in the scene to shine more than he does while still maintaining a fairly consistent integrity that ends up being the best thing about the entire movie. Allen resists the urge to turn Iosef into a caricature, bringing a layer of depth to the performance that seemed to have been absent in the scripting stage. Without him, “Wick” would have probably been the most unwatchable film of the year.

Indiscriminate action fans will probably find a lot to love about “John Wick,” starting with a return to form by Keanu Reeves. Unfortunately, not much about the film rises above the baseline stupidity that it boasts a little too proudly. Borrowing some world-building elements from the MCU and Joe Carnahan’s far superior “Smokin’ Aces,” “John Wick” does too little too late to establish an identity of its own, and, besides one stunning chase sequence inside a nightclub, it does even less to give audiences something they haven’t already seen. In its desperate attempts to be the coolest kid at the party, “John Wick” ends up being that guy who brought the acoustic guitar, spending the night trying to get laid by playing Oasis’ “Wonderwall” to every girl who will listen. You know that guy.

Josef Rodriguez is a writer, filmmaker, and musician living in New York City. He is often labeled as "that guy who didn't love Boyhood" and he finds himself liking Harmony Korine films more than he likes his own friends. When he's not stressing over turning in reviews on time, Josef can be seen playing guitar, watching "Spring Breakers," or trying to write the next great American movie.
You might also like
Ian McShaneJohn LeguizamoKeanu ReevesLance Reddick

by Jess Brooman on July 27, 2014
Despite its glaringly obvious flaws, "Hercules" is a grandly staged, entertaining, old-fashioned adventure movie that takes a unique look at the infamous tale by cutting the mythical son of Zeus down to human size (or as human as you can get whilst being played by Dwayne Johnson).

by Taylor Sinople on April 2, 2014
As a 13-year-old salsa-dancing prodigy, Bruce Garrett discovered the secret ingredient to Cuban fury: heart. Then he gets his face smashed into a puddle by a gang of bullies one too many times and decides to leave it all behind: the rhinestone-crested silk shirts, the rubber-soled, inch-and-a-half heels, everything. 25 years later, the only fury […]
Comments
Leave a reply
Add Comment Register

END_OF_DOCUMENT_TOKEN_TO_BE_REPLACED
Taylor Sinople Picks: The 16 Best Films of 2016
Form and Function in Alex Ross Perry’s “Queen of Earth&...
Digging for Fire and Unexpected: Husband and Wife Process Parenthoo...
Every Thing Will Be Fine 3D Review