Reviews
2
0
previous article
The 5 Creepiest Characters in the Tim Burton Universe
next article
A Fresh Look At: Tucker & Dale vs. Evil (2010) 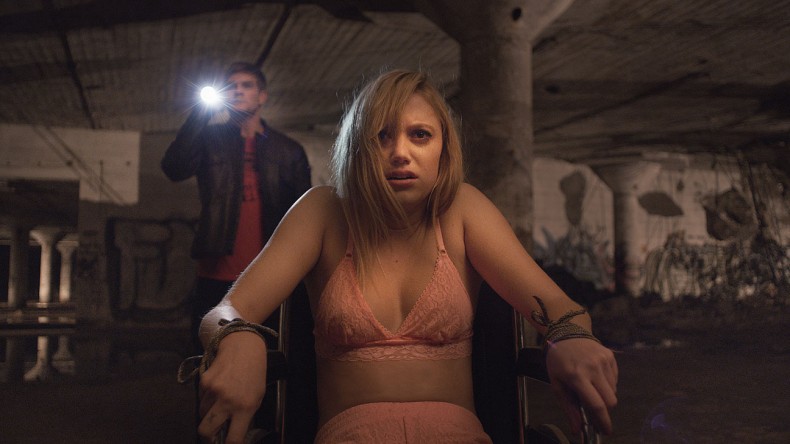 "It Follows" is an impressive step for director David Robert Mitchell and an invigorating entry into Horror.

Horror wins a breath of fresh air with “It Follows” in a genre where, too often, successful concepts are riffed and duplicated to death. That’s not to say the film doesn’t take notes from its predecessors: a chiptune Carpenter score by Disasterpeace reminds us of the film’s more gruesome inspirations. However, “It Follows” departs from its more blunt influences to brew a work of atmospheric dread influenced by director David Robert Mitchell’s prior coming-of-age film and its dealings with sex.

Jay (Maika Monroe) whiles away her bored suburban hours in a world seemingly without duties, adults, or time itself. The boy she’s been seeing, Hugh (Jake Weary), brings her on a date that ends in their first time having sex together. Immediately after, she is drugged and wakes to find herself bound to a wheelchair. When we think the film is bringing us to the terrors of sexual assault, the boy frenetically warns Jay that this was the only way he could stop “it” from seeking him. A naked woman appears, approaching step by step toward them, or more specifically to Jay, and Hugh wheels her away. He explains the entity to her and establishes the rules: it will come after you until you’ve passed it through sex; its form is that of loved ones; it appears only to those who’ve received it; it’s slow but adept; and it stops only when it has worked its way down the line killing each who have had it passed to them. He drops her off in front of her house and becomes unreachable afterwards. Whereas other films of the genre could lapse into exploitation of Jay’s capacity to maliciously pass “it” on, “It Follows” neatly avoids falling into an overly straightforward plot by delving into more complex subject matter.

The easy read of the film is pinning “it” on sexually transmitted diseases. Within the context of the director’s other feature “The Myth of the American Sleepover”, the use of sex can be taken as a step into adulthood. The characters in both films are youth on the cusp of maturity, yet “It Follows” has them avoiding sex as opposed to the reverse in “Myth”. This difference serves to explore the same coming-of-age theme through an untapped lens. Parents are only ever referenced to in both films but in “It Follows”, “it” repeatedly appears in the form of an adult. Being that this is the only fully grown person we see in the film “it” implies encroaching adulthood chasing the kids. A quote that arises from a character’s reading of The Idiot, “Your soul will leave your body and you will no longer be a person…the worst thing is that it is certain,” adheres to this theme with a suggestion of the inevitability of responsibility through a reworking of the age-old “life is wasted on the young.”

Thankfully unlike some of its family, “It Follows” never uses sex as a situation to obviously endanger the protagonists. Jay is even morally opposed to passing the position of haunted to another, much to the disappointment of enamored friend Paul. The costuming in several exploitable scenes even displaces the sexualization; characters will wear one-piece bathing suits or otherwise unrevealing clothing compared to “it” which is in various states of dress further equating adulthood to sex. The director’s former experience with drama shines here with a clear grip of executing mature topics without any mishandling.

However, “It Follows” is not all allusion and layers. It works just as effectively in its physicality. Several scenes that place “it” slowly advancing from the background create a nifty paranoia in the audience, making them scan each scene’s outskirts for signs of the ambling figure. In a comic recognition of the fear it creates, the film gives us a scene where a character who has received the haunt desperately asks the others who haven’t, “Do you see that girl walking towards us?” “Yeah.” “Oh.”

Friends Yara (Olivia Luccardi), Paul (Keir Gilchrist), and sister Kelly (Lili Sepe) are initial doubting Thomases for Jay’s unique ability to see the monster and later are used as allies to fend it off. They hesitate believing her only until a scene in which one of them is flung out of the way for impeding “it”s path to Jay. The acting of the supporting characters is where it should be but considering the characters themselves are simply tagalongs, the actors can fulfill only as much as they’re given; the focus is on Jay and her retreat. After Jay passes the role of haunted onto neighbor Greg (Daniel Zovatto) the red target is transferred. But the situation of another character being able to see “it” was unfortunately left unexplored; the scenario could have been manipulated to various horrifying ends but does not continue long enough to entertain any possibilities. Moreover, a dynamic role opened for another actor to fulfill gets eliminated just as it arises. This lack of significance within the supporting ensemble stands as a main detraction of the film.

The 8-bit score is paired with moments of ascending drone which dovetail the action in scenes of fleeing and smoothly give way to the next scene. The soundtrack is aptly paired with Michael Gioulakis’ sunbaked lo-fi imagery and adept use of stress-building long takes. These are the bread and butter of “It Follows”. Paired with the plot, this combination of a daubed mise-en-scene included with the lurking knowledge of a tireless force in ceaseless pursuit furnishes the film with its painted feeling of constant unease. “It Follows” tremendously develops on David Robert Mitchell’s previous feature length by reworking the subject material through a clever change of genre and offers an auspicious step in his stride as a filmmaker.

END_OF_DOCUMENT_TOKEN_TO_BE_REPLACED
Taylor Sinople Picks: The 16 Best Films of 2016
Form and Function in Alex Ross Perry’s “Queen of Earth&...
Digging for Fire and Unexpected: Husband and Wife Process Parenthoo...
Every Thing Will Be Fine 3D Review