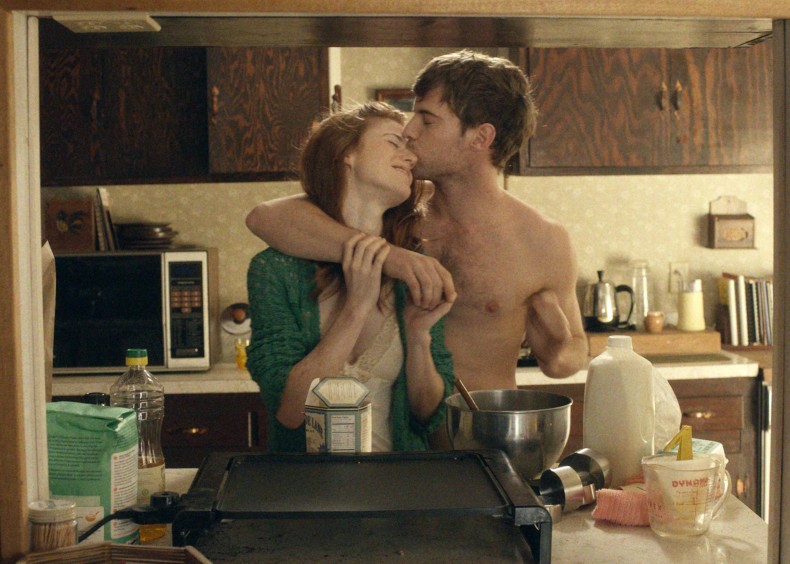 Despite early reliance on cliché and an irritatingly bland score, the climax of “Honeymoon” is worth navigating the stumbling blocks.

Bea (Rose Leslie) and Paul (Harry Treadaway) have just been wed. We see some direct to camera addresses from each of them in the midst of their reception. It gives a schmaltzy backstory to their meeting and one line in particular stands out so much that you can’t help but think it will be reincorporated later in the film after the horror has begun (spoiler: it will be.) The two arrive at Bea’s cabin, tin cans in tow, ready to spend their honeymoon in an unremarkable fashion: cooking for one another, canoeing on the lake, and, overall, just not being involved in any horror or science fiction rigmarole.

That last point is hit a little to hard during the first half the film. The score is irritatingly simple and obvious, trying too hard to establish the happy, carefree situation the couple finds themselves in, relaxing out in the woods with their whole lives ahead of them to share. Instead of allowing the circumstances of the film to play out without commentary, with every chord it’s saying, “Certainly nothing bad could possibly happen to these two, right?” In attempting to lull the viewer into a false sense of security, it ends up going the other way, trying too desperately and ultimately overplaying its hand.

But, of course, this little nuisance leaves pretty quickly when things begin to get creepy. An ominous bright light with a pulsating sound pierces through their windows while the two sleep. Bea begins to exhibit strange behavior: sleepwalking, forgetting details of her life or even how to make breakfast, and continued insistence that the wounds on her inner thigh are bug bites despite appearance to the contrary. It’s a build that is not wholly interesting at times, but crescendos in only about an hour and the film’s final twenty minutes runs the gamut from deeply disgusting to wholly intriguing. And clocking in at a little less than 90 minutes, it’s entirely worth the wait.

Aside from its very disturbing final few scenes, there are a few quick moments that stand out as going above and beyond the call of duty for a movie like “Honeymoon.” First is its neat usage of a few wooden ducks inside the main bedroom of the cabin. They are remarked upon early in the film, noting that “They’re fake and hollow, empty inside.” It’s a line that is not exactly thrown away, but not dwelled upon either, despite serving as a good bit of foreshadowing for the circumstances of the film. There are a few more glances towards these mallards throughout but no so many that it belabors their own point, still giving the viewer credit for attention.

There’s also a nice little parallel early on, just after another bright light scanned over quiet home in the dead of night. Paul awakens early to go fishing and stops momentarily to watch a moth dance upon the light from a lamp in their kitchen. He soon realizes that Bea is not in the house and goes in search for her. Now there is the obvious juxtaposition of this light having a strange effect on Bea, but the implication may be a bit broader, hinting at who or what may be affecting their lives.

Lastly, and by far the slightest, there is a moment later in the film where a game of Yahtzee is quickly rerouted into an interrogation, as Paul begins questioning Bea’s lies and secrecy. After abandoning the argument, but with suspense and suspicion in the air, Bea rolls the five dice. Cutting to the dice on the ground we see she has rolled 3 fours and 2 sixes, colloquially a “full house.” Again, not too much attention is paid to this nice little indicator of an unwanted presence in the midst, a malevolent inhabitant occupying their home currently. The shot lasts less than two seconds but small devices like this can do wonders. Knowing that the filmmakers are at least somewhat interested in subtlety and rewarding its viewers can often times, if not make up for, certainly make me momentarily forget longer periods of heavy-handedness, like what we see early on.

The best advice for viewing “Honeymoon” is to simply grin and bear the trite insipidity found in the film’s early sequences. As the lovers tour the cabin to music that is overbearing in its benignancy, just know that soon enough there will be a two minute sequence that will have you muttering curses under your breath while rubbing your head in disbelief. When the acting becomes a bit stilted and the writing more an imitation of a loving couple than the real McCoy, know that the imagery of this scene will stick with you long after the film concludes. And when every fiber of your being wants to yell to these characters to get help, call an ambulance, call anyone, just know that they won’t, and it’s a better movie for it.

END_OF_DOCUMENT_TOKEN_TO_BE_REPLACED
Taylor Sinople Picks: The 16 Best Films of 2016
Form and Function in Alex Ross Perry’s “Queen of Earth&...
Digging for Fire and Unexpected: Husband and Wife Process Parenthoo...
Every Thing Will Be Fine 3D Review