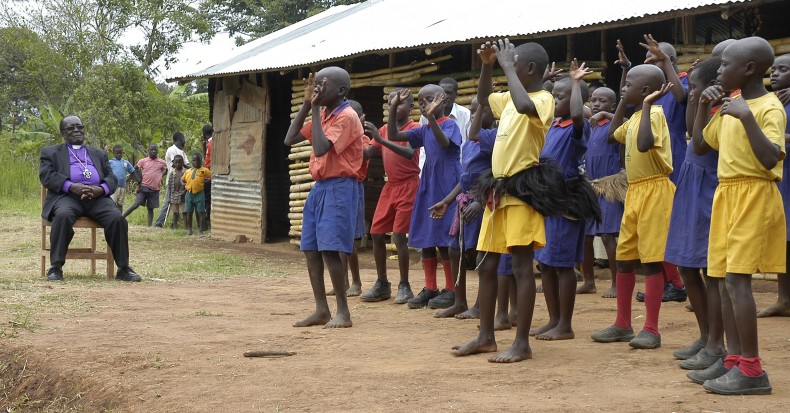 One of the more interesting questions that is faced in the NGO and human rights world is the question of what constitutes rights and what can be done to preserve them. It’s a question that every organisation faces – what are their codes of morality, and how will this code interact with the people the organisation seeks to help? Yes, there are documents like the Universal Declaration of Human Rights that are meant to help answer this question, but – without going into too much detail – there are always problems with universal claims.

“God Loves Uganda” looks at one particular group that faces this question as it does work across the developing world. The film looks at evangelical Christians from the US and the effect they have on politics, policy, and life in places like Uganda, which are brutally susceptible to outside influences. The evangelical missionaries come with aid, food, education, and money, and use those things to push their own particular brand of morality and rights.

The film itself is brilliantly shot and put together, with each scene telling more and more of the story of evangelical involvement in Uganda and the negative effect it’s had on things like AID prevention and LGBT rights. The longer the film winds on, the more aghast the audience becomes, and the more unreal what’s being depicted seems. In many ways, it puts the anti-LGBT rights activists in the US into perspective, making the audience feel a bit more comfortable about their own rights and their own country.

As a consequence of this, however, the evangelical missionaries who go to Uganda are vilified. They are shown as possibly being oppressed homosexuals themselves, to be pitied for their naivety at best if not outright reviled as frauds and hucksters. Not to insert my own politics, but there is a danger in taking the perspective that any group opposed to one’s own definition of rights must be evil, especially when it involves something that can be seen as so fundamental to one’s sense of self as religion. It is precisely such a mindset of the other as an unintelligible evil that breeds conflict and causes situations that are irreconcilable. Even in the case of rights, without consideration of another perspective, these same situations are created where one group is inevitably seen as fundamentally “wrong,” and there is no hope of solution.

All of this likely sounds melodramatic, and possibly, it is. However, if we accept that documentaries are effective at spreading a message, then it must also be accepted that a message of vilification can be spread from a film like this one. There is something to be learned from “God Loves Uganda,” without a doubt, about the state of LGBT rights in Uganda and the influence that can be had on it from what might otherwise seem like something harmless. However, when it’s inextricably coupled with a message of hate and condescension that uncannily resembles the messages evangelicals spread about LGBT individuals, one can’t help but look askance at the film and what it’s trying to achieve.  In insisting that evangelicals accomplish nothing but evil in Uganda, “God Loves Uganda” is as much pushing its own ideas as are the evangelicals it seeks to supplant.

Of course, one could argue that the film is coming at it from a human rights approach, but this comes back to the original question posed at the beginning of this review. What are rights? What are the perspectives that ought to be taken on them? Is it ever right to force one particular view of rights? Each side – the filmmakers and the missionaries – undoubtedly believes their cause to be just. Is it right to vilify one or the other?

All of this makes it rather difficult for me to properly review “God Loves Uganda.” As a film, it’s lovely. It’s engrossing, tells a fabulous story, is shot beautifully, and is a well-done documentary. In terms of its morality, however, and how it chooses to go about telling the story of LGBT rights in Uganda, it seems to me that it has the potential to do harm, albeit with good intentions. It’s wrong to call this a bad film or an immoral one – it is, after all, seeking to right what it sees as injustice, which is always commendable – but the questions that it raises are perhaps not quite the ones it intended to raise.

Overall, “God Loves Uganda” is a very good documentary, but one whose message must be considered, both in terms of what it says, and how it chooses to say it.