Review: Dumb and Dumber To 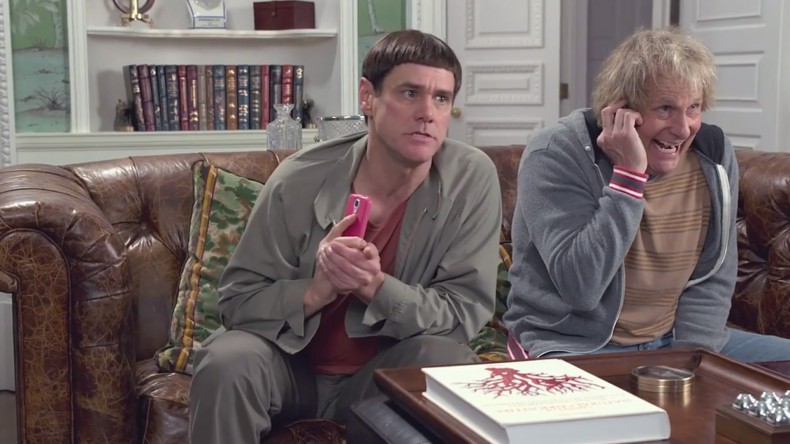 "Dumb and Dumber To" is not only the most disappointing sequel to a classic movie ever made ("Godfather III" included), it's also the worst film of the year.

1.0
Critic Rating
You have rated this

In the two decades since the Farrelly Brothers released “Dumb & Dumber,” the clamor for a sequel hasn’t exactly been one of deafening power. The Farrelly’s went on to release a fairly steady stream of hit comedies, showcasing strengths beyond the gross-out, low-brow humor of their debut film. But in recent years, the dynamic duo has become less innovatively raunchy and more predictably, unnecessarily crude. Their most recent efforts, “Movie 43” and “The Three Stooges,” have been particularly mean-spirited, relying on horrid characters to propel their already unfunny punchlines to an elevated plateau of bad.

Unfortunately, “Dumb & Dumber To” is no exception. Clever title aside, the film does nearly nothing to distinguish itself from the other, recent work by the Farrelly Brothers. Sporting the same drab cinematography, shoddy writing, and unpolished performances of their recent work, “Dumb & Dumber To” is not the sequel nobody wanted. It’s the sequel that should never have been.

Picking up two decades after the events of the original film, it’s revealed that the lovably goofy Lloyd Christmas (Jim Carrey) has been catatonic since his adventures with Mary Swanson. His closest friend, Harry Dunne (Jeff Daniels), has been coming to see him every Wednesday for the past twenty years, and when he reveals that he needs a kidney transplant, Lloyd suddenly awakens, revealing that his illness was merely just an elaborate, extended prank to fool Harry.

In awe of this, the two boys pick up right where they left off. Getting back into the swing of things, Harry continues to explain his situation to Lloyd, stating that he needs to find a donor soon or he won’t make it. The guys visit Harry’s very obviously Asian parents, who break the news to him that he’s adopted and his real parents are dead. But when his adoptive mother hands him a box of mail that’s accumulated for the past twenty years, he finds a later from the infamous Freida Felcher (Kathleen Turner), informing him, in 1991, that he has a child on the way.

Harry and Lloyd track Freida down, only to find out that the kid, a daughter, was given up for adoption soon after she was born. Desperate to meet his daughter and get that kidney, Harry convinces Lloyd to take another road trip, this time for something bigger than Aspen. This time, it’s a matter of life and death.

Like many comedy sequels that provide too little too late, “Dumb & Dumber To” suffers from a bloated running time, a barrage of jokes that don’t land, and constant references and retreads to the original film that play out forcefully, pandering to fans of the original film. Even the reliable duo of Jim Carrey and Jeff Daniels fall flat, playing Harry and Lloyd to a degree that resembles mental retardation instead of the affable dopiness that made them so easy to root for in the original film. Lloyd, particularly, is written as a surprisingly mean-spirited character, while Harry is dumbed down considerably from the first film, putting the two characters on an almost equal playing field that completely offsets the dynamic. In fact, the rapport between the two characters has more in common with the second-rate prequel, “Dumb & Dumberer,” than it does with the original.

The Farrelly’s have never been especially visual directors, but their regular DP, Matthew F. Leonetti, seemed to have given up somewhere between “The Heartbreak Kid” and “Hall Pass,” because each Farrelly Brothers’ film of the 2010s has had this flat, unappealing palette that does its actors, its jokes, and its editing no favors whatsoever. “Dumb & Dumber To” is, visually, the worst of the bunch. It drowns its actors in an unnatural hue, while saturating the living hell out of everything else. The obviously lazy camerawork, incessant CGI effects, and dramatic short depth of field – that has no place in a freeform comedy like this – all work to completely unravel the illusion that much, or any, thought was put into the making of this movie.

Heavy on expository dialogue, lame jokes, and laughably bad dialogue, the film’s script also seems to be lacking in nearly every aspect. From its convoluted story to its poorly drafted characters, one gets the impression that, not unlike the first film, the Farrelly Brothers merely thought of jokes, and then just wrote the scene around the joke, moving on without much regard to narrative or continuity. Yes, a movie called “Dumb & Dumber To” is going to be stupid, that’s expected, but what made the first film so great is that it was actually a shockingly intelligent piece of filmmaking. The stupidity didn’t extend to the filmmakers themselves, and they were in control of all their elements, tweaking the world they built ever so slightly to induce chaos.

Here, there’s a sense that the Brothers were flailing, trying desperately to create a story that mirrored that of the original while also paving its own way. But the final product reveals that they didn’t have much success, or maybe they just didn’t care. Either way, this film is a slap in the face to longtime fans of the comedy duo, who have been treating their audience to trash like “Movie 43,” totally disregarding what made their earlier films funny in the first place.

“Dumb & Dumber To” isn’t just bad: it’s angering. It ruins the lore of two great characters, and fans of the original are advised to ignore this movie’s existence, watch it out of morbid curiosity, and then completely forget it was ever made. Instead of extending the legacy of the first film and creating an appropriate continuation of the story, “Dumb & Dumber To” plays out as a high-concept, low-payoff comedy that flat out destroys the best scenes and characters from the original film.

It may be unfair to expect anything even remotely as good as “Dumb & Dumber,” but the Farrelly Brothers knew what was expected of them when they decided to make a sequel to one of the most popular comedies of all time. Unfortunately, this sequel is not anywhere near as good as it should be, and audiences won’t be able to help themselves from feeling like the only people yelling “gotcha!” at the end of this movie are the Farrelly’s themselves.

Josef Rodriguez is a writer, filmmaker, and musician living in New York City. He is often labeled as "that guy who didn't love Boyhood" and he finds himself liking Harmony Korine films more than he likes his own friends. When he's not stressing over turning in reviews on time, Josef can be seen playing guitar, watching "Spring Breakers," or trying to write the next great American movie.
You might also like
Bill MurrayRob Riggle

by Josef Rodriguez on October 12, 2014
Bill Murray may be able to do pretty much whatever he wants, but he shouldn’t be making bad movies. And St. Vincent is a bad movie.
Comments
Leave a reply
Add Comment Register

END_OF_DOCUMENT_TOKEN_TO_BE_REPLACED
Taylor Sinople Picks: The 16 Best Films of 2016
Form and Function in Alex Ross Perry’s “Queen of Earth&...
Digging for Fire and Unexpected: Husband and Wife Process Parenthoo...
Every Thing Will Be Fine 3D Review