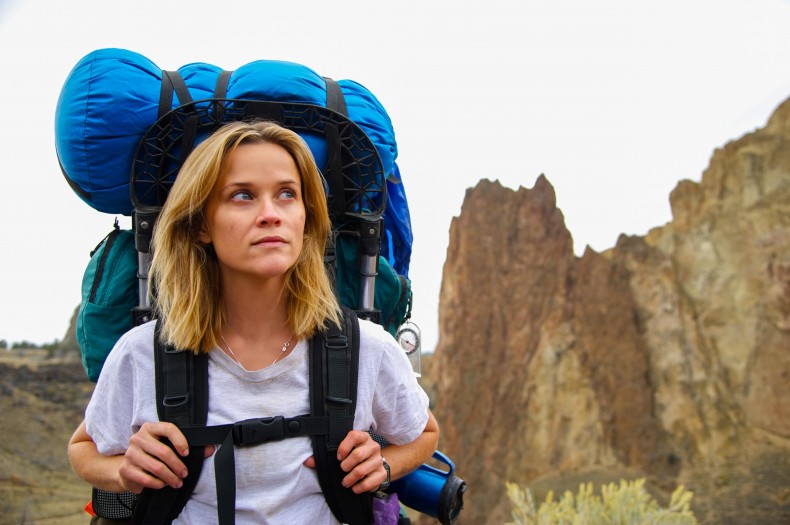 “Wild” features some of Jean-Marc Vallee’s most accomplished work behind the camera, and in the editing room, but it never manages to maintain the constant energy it needs to have the brisk pace that it wants, especially at an overlong 115 minutes.

Before she was a best-selling author, Cheryl Strayed (Reese Witherspoon) was a woman who, in the wake of a debilitating drug addiction and her subsequent divorce, walked 1,100 miles from the Mexico border to the Canadian border on the Pacific Crest Trail, a popular hiking path that passes through Arizona and California up to Washington state. Through heat, snow, mud, and water, Strayed did as her name commanded and, quite literally, walked away from her demons.

Reese Witherspoon has been dying for a career-booster like the one she gets in “Dallas Buyer’s Club” director Jean-Marc Vallee’s newest performance vehicle. Vallee has, in his last two films, shamelessly displayed that his work is almost entirely a vice for great actors to give great performances, as evidenced by a double win for both Matthew McConaughey and Jared Leto earlier this year.

And while not much has changed in “Wild,” Vallee comes prepared with a bigger bag of directorial tricks to keep the audience interested when Witherspoon’s performance does not. Seeing that the film is essentially a one-woman show, Vallee is more aware of his presence as a director and an editor, and certain sequences of “Wild” veer off into blatant surrealism, albeit never without the watchful eye of a director who is, when not pandering to his actors, always working visually to offer audiences an experience they haven’t quite encountered before.

That said, Witherspoon’s performance is her best in a long while. As an actress she’s constantly reinventing her persona and subverting expectations in the best possible ways. Here, she taps into the grittier, less self-conscious roots of her earlier work, specifically “Fear” and 1998’s “Twilight.” Witherspoon was often cast as the good-girl-with-a-bite after her work in “Cruel Intentions,” but here she reminds us that she can play the inverse just as effectively. Fans of “This Means War” and “Legally Blonde” would be advised to steer clear of this film if they have any hope of maintaining an image of Witherspoon that involves the words “wholesome” or “pure.”

Where the film falters is in its screenplay by renowned novelist Nick Hornby, who packs “Wild” to the brim with overly sentimental dialogue and awkward exchanges that just don’t translate well to the screen. Alternately, the film tends to admonish Cherly for promiscuous behavior that wouldn’t seem out-of-place from a male’s perspective. The film has no problem forcing Cheryl into encounters with a host of other travelers and townspeople, but the context within these encounters is almost inherently sexual, and the repetitively unsubtle thematics of the film become painfully clear far sooner than they should.

However, “Wild’s” best moments often arise as a result of the idiosyncrasies that appear throughout Cheryl’s journey. An initial scene of her mounting a comically large pack on her back is more thrilling than any superhero-suit-up of the year, and a third-act detour of Cheryl listening to a young boy singing a song next to his pet emu, are among the most evanescently beautiful moments in any film this year. Unfortunately, “Wild” is not able to keep constant any one source of energy or life, even with a performance as accomplished as Witherspoon’s. With its classic, almost techno-phobic sensibilities, “Wild” should resonate far more with a generation of people dying for a reason to get away from their cellphones and into the unpredictability of nature, but it never quite packs the emotional wallop that it needs to get there.

Josef Rodriguez is a writer, filmmaker, and musician living in New York City. He is often labeled as "that guy who didn't love Boyhood" and he finds himself liking Harmony Korine films more than he likes his own friends. When he's not stressing over turning in reviews on time, Josef can be seen playing guitar, watching "Spring Breakers," or trying to write the next great American movie.
You might also like
gaby hoffmannreese witherspoon

by Taylor Sinople on May 26, 2014
The funny and bold "Obvious Child" is a successful launching board for star Jenny Slate, but feels posed better as a TV show than a film.

by Taylor Sinople on July 18, 2013
The word “bizarre” must have been at least partially created to help define Chilean filmmaker Sebastián Silva’s hallucinogenic, rough-edged comedy “Crystal Fairy”. Setting out into the remote desert vistas of Chile with a 12-page outline and no tripod is a real-life right of passage as legendary as the quest that the characters of “Crystal Fairy” […]
comments
Leave a reply
Add Comment Register

END_OF_DOCUMENT_TOKEN_TO_BE_REPLACED
Taylor Sinople Picks: The 16 Best Films of 2016
Form and Function in Alex Ross Perry’s “Queen of Earth&...
Digging for Fire and Unexpected: Husband and Wife Process Parenthoo...
Every Thing Will Be Fine 3D Review