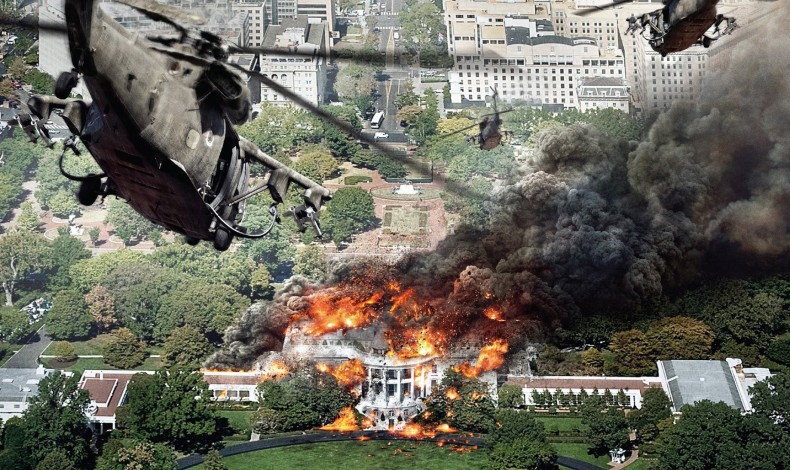 If you can put up with the necessary amount of senseless action that comes with the genre, “White House Down” is great entertainment.

Three-tour Afghanistan veteran John Cale’s (Channing Tatum) career has taken a turn for the mundane when we meet him working as security detail for the United States Speaker of the House. A U.S. Capitol Police officer, Secret Service reject, and divorced father to the young, politics-obsessed Emily (Joey King), Cale takes his daughter to visit the White House when it’s suddenly attacked and taken over by a paramilitary group led by an American mercenary named Stenz (Jason Clarke). While Cale is being taken hostage in the West Wing, his daughter Emily is in the bathroom – unaware of what’s going on. Cale uses his expertise as a soldier to escape captivity and attempt to find his daughter when he runs into the President of the United States (Jamie Foxx) instead.

Now attempting to protect the President while still searching for his daughter, Cale becomes embroiled in a plot that reveals the internal powers responsible for the attack in a twist on the terrorist plot that attempts to shed light on the impact of American war crimes on American soldiers.

That’s right, for the second time this year, the architectural symbol of the United States government is being blown to pieces and filled with bullet holes in disaster-plot-virtuoso Roland Emmerich’s “White House Down.” With a history of photographing the end of the world in such hit-or-miss pictures as 1996’s “Independence Day,” 2004’s “The Day After Tomorrow” and 2009’s “2012,” it’s about time Emmerich got around to making “White House Down.”

The question is whether this new film is a valid experience to audiences who saw the strikingly similar “Olympus Has Fallen” earlier in the year. Because the marketing teams have done nothing to separate the two films in the minds of potential audiences, it’s up to word-of-mouth and film critics to spread the word that the films are, in fact, distinct experiences despite identical set-ups and even some similar beats throughout the narrative.

The most important difference is one that should have been yelled loud and far during the promotional campaign of the film – it’s not just a contemporary action movie! Despite the dramatic and grave tone of the poster and trailer, “White House Down” has about as much fun with the serious subject as is respectably possible. There are laughs – some cheesy, some clever – throughout the entire film, never letting the viewer forget that despite the terrifying reality being depicted on-screen, they are here to have a fun time. It’s an 80’s movie throwback to a time when even the grimmest subjects could still be made light of.

I was especially delighted with the in-jokes that show that the characters have seen action movies, too, and understand the conventions of them so well that when one classic action-movie moment actually happens to the characters, they burst out laughing at the ludicracy of it.

It isn’t all laughs, though, as the director gives significant weight to the dramatic subplots of the story that have John Cale desperately trying to reach his daughter. The drama isn’t too bad, and it was impressing to see Emmerich give the characters the time they deserve in the first act to develop a few strings of identifiable characteristics and motivation before the action ramps up. It doesn’t feel nearly as exploitive of our desire for blood and explosions as it could have.

When the White House is initially taken over, news conglomerates quickly report the news of “Arab terrorist attack on America.” These unconfirmed rumors turn out to be wrong when it is revealed that the American government and its involvement in war crimes have in some way psychologically damaged all of the mercenaries holding the White House.

It becomes a race to uncover who is responsible for the terrorist plot, and what they want. During the action, the pace is often slowed down to examine the politics of such a disaster. The members of the nation’s government that have not been taken hostage must bend or ignore protocol and expose themselves to the allure of becoming an “American Hero” by ending the crisis first – at any cost. These are big ideas given real thought by the filmmakers, you can’t help but imagine what the film could have been as a smaller budget political thriller.

Mixed in to the rapid transition of comedy and drama are quirky moments that keep the over-two-hour film interesting. The White House tour guide cares more about the priceless valuables housed in the Oval Office than his own life.

Despite all the good fun you’ll have with the film, it’s impossible to ignore its faults. The acting is way off, particularly with the direction of Jamie Foxx as the President. I’ve never seen a more unconvincing president depicted on screen. While it’s funny to show the President wearing popular Jordan sneakers and shooting a rocket launcher out a car window, a large amount of legitimacy is given up in exchange for these visual jokes. Channing Tatum is kinetically loose, embodying the action hero with a natural ease, but stiffening up when it comes to flexing more dramatic muscles.

The perfect storm of the summer blockbuster should have equal portions of all-out entertainment and truly convincing drama. The latter is no doubt lacking here, and when we are hit with a few twists in the final act, they don’t land with anywhere near as much dramatic power as they could have. When it has all settled, “White House Down” will be remembered as the superior of similar films this blockbuster season. It is visually well constructed, and puts admirable effort into subplots designed to make you question the U.S. before you celebrate it at the end.

Taylor is a Chicago-based writer and aspiring film historian. He is the editor here at TFP, and has contributed to a number of international publications such as Cinema Scandinavia, PopMatters, and Room 101 Magazine. He can also be found listening to podcasts, researching topics he has little use for, or running after a city bus.
You might also like
Channing Tatumjamie foxxjason clarkeJoey King

END_OF_DOCUMENT_TOKEN_TO_BE_REPLACED
Taylor Sinople Picks: The 16 Best Films of 2016
Form and Function in Alex Ross Perry’s “Queen of Earth&...
Digging for Fire and Unexpected: Husband and Wife Process Parenthoo...
Every Thing Will Be Fine 3D Review