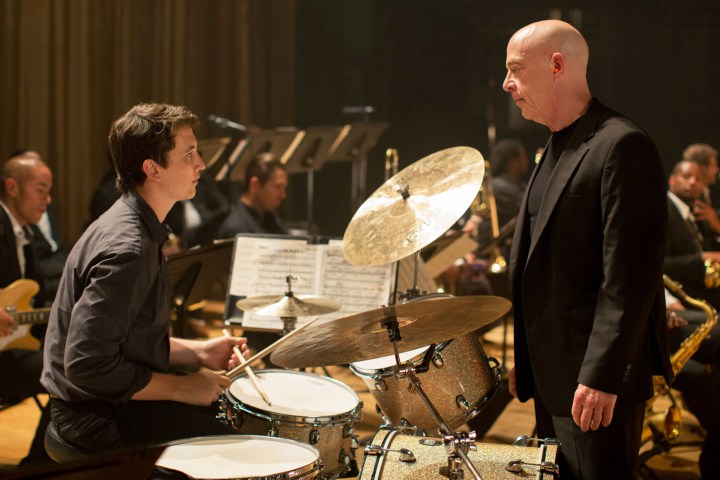 Once in a while a film comes around, one so tightly packed with energy, enthusiasm, and a genuine passion for art that it can’t help but lunge hungrily at its audience, only to strangle each and every person in attendance into submission. “Whiplash,” writer-director Damien Chazelle’s sophomore feature about a brilliant young jazz drummer (Miles Teller) who butts heads with his short-tempered and arguably abusive teacher (JK Simmons), is such a movie. It also just happens to be one of the most exciting, original, amazing, and beautiful films of the entire year.

Teller, who’s mostly known for his fast-talking comedy roles in films like “Project X” and “21 & Over,” puts his motormouth on hold to play Andrew, a prodigal young jazz drummer who is accepted into a prestigious New York music academy, only to be recruited by the Jazz department’s most well-known conductor, Terence Fletcher (Simmons). Honored to be the youngest member of the corps, Andrew quickly realizes that Fletcher is the toughest, loudest, and meanest teacher he’s ever had. Through months of training, Andrew begins to become the great drummer he’s meant to be under Fletcher’s cantankerous hands.

“Whiplash” isn’t a film that should be describe at length, with copious detail. Instead, it should be described in a series of onomatopoeia of the “bam” variety. That’s not to say that Chazelle’s film isn’t packed with rich characters and themes; it is. But it’s also loud, furious, and unceasingly entertaining. With enough tension to tear through the last fifteen thrillers released in theaters, and action that puts nearly every Marvel movie to shame, “Whiplash” is a piece of art not characterized by its writing, its directing, or even its performances. It’s characterized by a commitment to providing a moviegoing experience that’s as fun as it is tragic, and as rich as it is accessible to anyone who has ever felt like they’re meant for something more.

Shot and cut by Sharone Meir and Tom Cross, respectively, within an inch of its own life, audiences seeking a thrill might begin involuntarily sprinting to the closest print of Chazelle’s film. However, anyone seeking out a character drama, a dark comedy, or a wholly inspiring battle of wills should find that “Whiplash” is more than suitable. The film doesn’t rely on shock tactics to get its point across, allowing the energy to grow organically and, when it reaches its peak, function erratically and unexpectedly, like a great jazz solo. Chazelle knows exactly when enough is enough, and he displays enough restraint, both behind the camera and in the script, to offset the films more incredulous scenes.

Everything you may have heard about the film’s pair of lead performances from Miles Teller and JK Simmons are probably true. Both characters are well-developed enough to carry their own film, but Chazelle writes this seemingly unceasing sensory assault with an expert precision that ends up extracting far more poignancy than initially expected. Fletcher so obviously wants Andrew to be the greatest jazz drummer since Art Blakey, and he’s willing to throw everything at him, both physically (chairs are flung) and mentally, to make it happen. Andrew, on the other hand, battles his own demons by facing the failed potential of his father’s writing career, the scrutiny he faces from his judgmental family, and a relationship with a local movie theater candy girl (Melissa Benoist) that’s beginning to take a backseat to his time at the conservatory.

The film does right by not saddling Fletcher with a dead/dying wife subplot, or something just as contrived, and Chazelle lets the character’s sensitivity come through in the context already provided in the film: music. One particularly moving scene, where he eulogizes a former student who died by hanging, exhibits Fletcher’s dedication to his students clearly and succinctly, and the feeling lingers in the air slightly as Chazelle moves on to the next scene, as it should. It’s these subtle touches that makes Chazelle’s inarguably loud movie into a quiet, moving character piece that really reinforces the idea that people don’t stumble upon greatness, they must become great.

No matter how you slice it, “Whiplash” is a film that demands to be seen. And it should be, repeatedly and preferably in large droves. It’s a film of rare power, one that threatens to overwhelm its viewers but doesn’t. Even if it does, the only thing audiences will be overwhelmed by is greatness. If, at 29, Damien Chazelle is already making films as great as “Whiplash,” who knows what he’ll be doing in five, ten, or twenty years? Hell, I’m just excited to see what he does next.

Josef Rodriguez is a writer, filmmaker, and musician living in New York City. He is often labeled as "that guy who didn't love Boyhood" and he finds himself liking Harmony Korine films more than he likes his own friends. When he's not stressing over turning in reviews on time, Josef can be seen playing guitar, watching "Spring Breakers," or trying to write the next great American movie.
You might also like
Damien ChazelleJK SimmonsMiles TellerPaul Reiser

END_OF_DOCUMENT_TOKEN_TO_BE_REPLACED
Taylor Sinople Picks: The 16 Best Films of 2016
Form and Function in Alex Ross Perry’s “Queen of Earth&...
Digging for Fire and Unexpected: Husband and Wife Process Parenthoo...
Every Thing Will Be Fine 3D Review