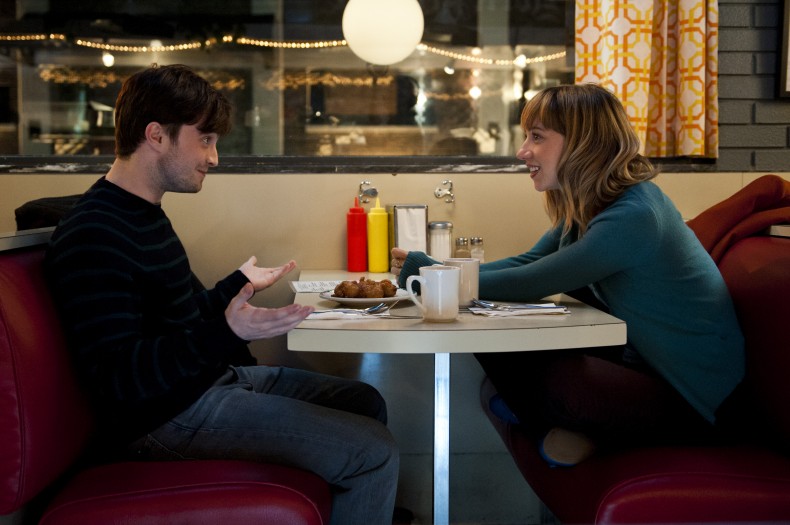 “What If” is a fresh and funny romantic comedy until it isn’t, one that disregards two and a half acts of character development in favor of the schmaltzy resolution its creator apparently detests.

“What If” opens on Wallace (Daniel Radcliffe), a young and heartbroken med student who recently dropped out of school, leaving himself and his life with nowhere to go. After a year of self-pity, Wallace silently declares his refusal to wallow in sadness by deleting a voicemail left by his ex on the night of their split. Downstairs, Wallace returns to a party being hosted by his best friend, Allan (Adam Driver), who has recently become acquainted with a woman named Nicole (Mackenzie Davis).

Wallace, on the other hand, is staring at a fridge covered with word magnets, which he uses to create the phrase: “love is stupid.” He’s approached by Chantry (Zoe Kazan), Allan’s adorably effervescent cousin. The two connect instantly and spend the rest of the night talking all the way back to Chantry’s house, where she reveals that her boyfriend is waiting inside. Wallace, disheartened and alone, returns home with no intention of ever seeing her again. But, as fate would have it, the two run into each other at a late night showing of “The Princess Bride,” both unaccompanied, and they agree to remain strictly platonic.

As their friendship develops, we’re offered a peek into Chantry’s home life, one that includes a beautiful Toronto apartment, a horny and lonely sister (Megan Park), and a faithful, loving boyfriend, Ben (Rafe Spall), whom Chantry has been with for five years. Dowse’s film makes no attempt to demonize Spall’s character, and his brief interactions with Wallace are hilarious and, to an extent, realistic. That is until Ben, after accidentally being knocked out of a window by Wallace, tells Chantry that a dream job in Dublin has come up, and he’ll have to move there, among other countries, for six months.

A long-distance life was never in Chantry’s plan, and as her yearning for Ben grows, so do Wallace’s yet unrevealed feelings. For the first time in over a year, Wallace has found someone who makes him happy, and her heart belongs to another men. Consulting Allan, who is engaged to Nicole, for advice, Wallace realizes that there’s really nothing he can do except confront Chantry about his feelings, finagle his way into her life, or move on and forget. None of these are viable options.

On paper, “What If” is a mature romantic comedy about the reality of unethical love. Michael Dowse, who directed two of the most unconventionally hilarious films of 2011 (“Goon” and the sorely underrated “Take Me Home Tonight”), is a director who understands the art of subtle subversion. He’s proved time and time again that slight variations on conventionality are necessary to create memorable movie romances, and that cliche is not something to be scoffed at: it’s meant to be embraced, examined, and executed with a true understanding of the why’s and how’s of romantic comedy.

Radcliffe is wonderful as Wallace in one of his first post-Potter performances, and Zoe Kazan has officially redeemed herself after “Ruby Sparks” in a performance that’s as adorable as it is genuine. But that doesn’t keep Adam Driver, a fan favorite on HBO’s “Girls,” and newcomer Mackenzie Davis from completely stealing the show as the newly engaged lovebirds who tag along on most of Wallace and Chantry’s excursions. Both actors deserved more screen time, and a spin-off a la “This is 40,” which charts the trajectory of their inevitably unconventional domestic life, would be a welcome addition.

“What If” doesn’t play the “will they won’t they” game with its audience, instead adopting the “they won’t so deal with it” philosophy, one that worked wonders for Marc Webb’s “(500) Days of Summer.” Wallace and Chantry, for a host of reasons offered throughout, should not end up together. Their attraction and chemistry is obvious, but those two factors are not enough to build a lasting relationship. Dowse, alongside writer Elan Mastai, understands this and uses it as a foundation from which to build for the rest of the film. The non-romance of “What If” is what makes most of the film so enjoyable to watch; for the first time in what seems like forever, I wasn’t stressed by a romantic comedy that felt like every scene is just another second closer to an unnecessary and unearned consummation, one that exists only to tug at the heartstrings and wallets of the audience.

However clumsy or poorly edited the film was, which it was, “What If” got my attention by just being different. Its characters spoke from a script that seems like it was written by Lena Dunham and David Mamet, and the development of the friendship between Wallace and Chantry felt organic. Unfortunately, the feeling doesn’t last, as “What If” succumbs to the trappings of the genre it so openly admonishes by eventually allowing the two to be together against all odds and better judgment through a series of inane decisions and plot devices that buckle under the weight of their own contrivances.

A shame, really, since “What If” could have been the indie romance of the year. What’s worse is that, for almost 90 minutes, it is. Everything is set up to end with the characters realizing their mistakes and fondly holding each other in their memories, going on to live the beautiful lives they deserve. But Dowse decides against it, determining that a career and an established romance are nothing against the unstoppable stupidity of new love. Rafe Spall, particularly, is treated like a slice of chopped liver in a performance that is far better than the character requires him to be. Though Dowse repeatedly attempts to stray away from the “douchey boyfriend” trope, the film ends up dealing with the character in exactly the same way, unceremoniously casting him off-screen when it’s time to move on.

All of this criticism of the film’s third act isn’t leading to the consensus that I didn’t like “What If.” It’s just not nearly as good as it should have been, especially with a cast as talented as this directed by someone who obviously knows what he’s doing. The unwritten rule that all romantic comedies must end with a conventionally happy ending isn’t giving me hope for the future of the genre. What rom-com directors don’t seem to understand is that a film like “(500) Days of Summer” resonated so much with audiences because it dared to be different and truthful, even when the audience expected something different.

“What If” just doesn’t have the courage to go this route, even when it’s clearly written with the self-awareness of a film that does. The posturing that goes on during the first two acts makes the film’s third all the more unconvincing, which should leave audiences unfulfilled and just a little bit cheated. Mastai’s script, which ends without the phony epilogue included in the film, is a much better send-off for the characters and could have been a great ending to an otherwise above-average film. This does beg the question: what if it was?

Josef Rodriguez is a writer, filmmaker, and musician living in New York City. He is often labeled as "that guy who didn't love Boyhood" and he finds himself liking Harmony Korine films more than he likes his own friends. When he's not stressing over turning in reviews on time, Josef can be seen playing guitar, watching "Spring Breakers," or trying to write the next great American movie.
You might also like
Adam DriverMackenzie DavisZoe Kazan

by Josef Rodriguez on September 21, 2014
“This is Where I Leave You” needs to be left alone. It wastes the year’s best cast with a cliched, schlocky, and dull script that does its performers absolutely no favors.

END_OF_DOCUMENT_TOKEN_TO_BE_REPLACED
Taylor Sinople Picks: The 16 Best Films of 2016
Form and Function in Alex Ross Perry’s “Queen of Earth&...
Digging for Fire and Unexpected: Husband and Wife Process Parenthoo...
Every Thing Will Be Fine 3D Review