Review: We Are the Best! 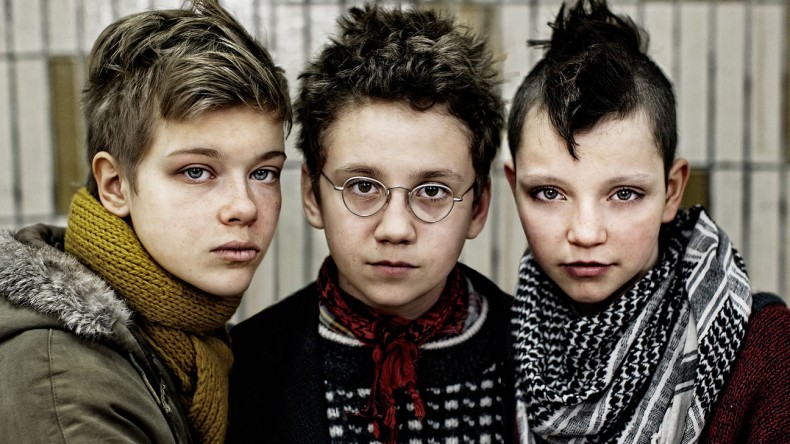 “We Are The Best!” is a spectacularly funny coming-of-age drama that recalls childhood as a youthfully vibrant romp instead of falling into nostalgia.

“We Are The Best!” opens with a phone conversation so recognizable that it could just as easily have been a collective audience daydream, recalling teenage days spent locked in our rooms, complaining on the phone to our friends about how everyone else’s life is cooler than ours. It sets a tone that follows through the next hour and a half, reminding us of our younger selves so that the excess weight of forced nostalgia can be dropped as we immediately connect with the characters.

Shot with a documentary feel, the film is a loosely plotted slice of life focused on three pre-teen girls. Bobo (Mira Barkhammar) and Klara (Mira Grosin) are best friends who decide – on a whim, and to spite the older boys who tease them – to start a punk band. The fact that neither of them plays an instrument is only ever a secondary concern to them, but when they see Hedvig (Liv LeMoyne) playing classical guitar in a school talent show, they invite her to join their ranks. From there, a host of familiar events play out as the girls goof off in school, go to their first party, and fight over boys.

If the last sentence makes the film sound trite or formulaic, it’s only because this is such a keen rehashing of the pubescent comedies and dramas we’ve come to know. Unlike so many before him, Moodysson has no interest in pushing these girls towards some grand climactic event, like the crest of a wave that they can ride into the next phase of their adolescence. The third act hook – a Christmas concert at a community centre in a neighbouring town – gleefully subverts any notion of coming-of-age-ness as the girls are booed off stage, still looking like they’re having the time of their lives. The spirit of the film lives in the understanding that growing up doesn’t happen in one spotlighted scene, but rather a little at a time, and that sometimes having a blast with your friends is just as memorable as any self-important life lesson.

Substantial praise is due to the three leads, all making their acting debut. In excellent performances that are mature beyond their young years, the girls are charmingly awkward and unprecedentedly believable – often it feels like they aren’t even acting, a feat that is duly impressive for a child performer. The best of the three is Mira Grosin, who is the heart of the film just as Klara is to the band. Grosin is as earnest as Klara is fickle; she almost deadpans her lines with a hilarious and wide-eyed conviction, which is made even funnier by her constant willingness to drop her principles and change the rules whenever they no longer suit her. What all three convey best, though, is the struggle between individuality and embracing a lifestyle; they’re stuck in the youthful limbo of not yet having found themselves, but they’re not afraid to keep searching until they do.

Based on a graphic novel by Coco Moodysson, wife of director Lukas, “We Are The Best!” is meant to be somewhat autobiographical. Herein lies the film’s greatest strength: she isn’t telling just her own story. This is a film for musicians; for outcasts; for children of the 80’s; for anyone who has ever been embarrassed by their parents or a bad haircut. In short, this is a film for everyone.

Zack is a software developer from Halifax, Nova Scotia moonlighting as a cinephile - until the weekend, when those roles reverse. He can often be found thoughtfully stroking his beard or thoughtfully stroking his cat. Despite remaining in the sitting position almost exclusively, he occasionally makes time to be bent into other shapes during jiu jitsu practice. You can aggresively shout your opinions and objections at him via Twitter or in person (anywhere beer is served).
comments
Leave a reply
Add Comment Register

END_OF_DOCUMENT_TOKEN_TO_BE_REPLACED
Taylor Sinople Picks: The 16 Best Films of 2016
Form and Function in Alex Ross Perry’s “Queen of Earth&...
Digging for Fire and Unexpected: Husband and Wife Process Parenthoo...
Every Thing Will Be Fine 3D Review