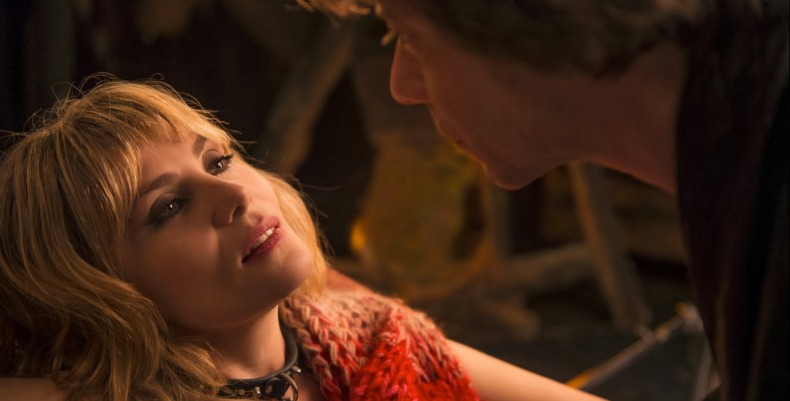 Successfully adapting a stage production to the screen is an arduous task, one that Polish director Roman Polanski could not accomplish with his 2011 film “Carnage,” an adaptation of the play “God of Carnage” by Yasmina Reza. Now, three years later, Polanski has brought us another adaptation, this time from David Ives’ 2010 play, “Venus in Fur.” The story concerns an actor and a director, played by Polanski’s wife Emmanuelle Seigner and Mathieu Amalric, respectively, and her plea to audition for the upcoming production of “Venus in Fur.”

In the context of both play and film, the Venus in Fur being performed is that of Leopold von Sacher-Masoch, whose last name inspired the word masochism, and his story of a man who becomes a sexual slave at his own request. The director, Thomas, who also adapted Masoch’s novella, is having trouble finding a leading lady. Having auditioned girls all day, he still has not found the intellectual and physical beauty he’s been looking for. That is, of course, until he meets Vanda, who happens to share the name of the story’s female protagonist.

After some begging, Thomas gives Vanda a chance to audition for the show. She is a revelation. With an understanding of every movement, nuance, and inflection, she is the Vanda he’s been searching for. So much so that Thomas wants to continue running lines with Vanda for the rest of the night, perhaps to fulfill a fantasy that he himself wrote on the page. As the pages turn, Thomas and Vanda blur the lines between fiction and reality in an attempt to search artistically for the true relationship between pain and pleasure.

Unlike “Carnage,” “Venus in Fur” never feels like a filmed stage production, an odd change of pace considering that both films share almost the exact same crew. However, the combination of Alexandre Desplat’s wondrous score and Pawel Edelman’s subtly gorgeous cinematography elevates Ives’ script to such a cinematic level, that the only explanation is more suitable material. Whereas “Carnage” is a story that probably should have stayed on the stage, “Venus in Fur” is a production that just begged for an adaptation, and the adaptation from Ives and Polanski, along with the film’s two impeccable performances, make “Venus in Fur” one of the year’s best.

Amalric, who is dressed up as a Polanski look-alike, plays off Seigner, who co-starred with the actor in 2007’s “The Diving Bell and the Butterfly,” with dynamic chemistry. At 48 years old, Emmanuelle Seigner is sexier and far more charismatic than just about any young starlet in Hollywood today. Her chemistry with Amalric, whose Thomas is only just manifesting his sexual desires in a physical way, is one of the most sensual things put to screen in some time. But it’s not without purpose. Polanski’s comment on sexuality is a poignant one, and in a culture dominated by literary pornography a la “50 Shades of Grey,” the film brings up many important questions about Masoch’s work, and if it is only revered because it is a classic piece of literature. Perhaps, like the E.L. James’ of today, Masoch’s writing is nothing more than smut, basked over by angry, suppressed misogynists like Masoch himself.

Polanski’s camera dances through each scene with something resembling manic glee, and his work becomes something of a third character within the film. The best Polanski films, excluding “Carnage,” are ones that have confined his characters into tight spaces. From his debut feature, 1962’s “Knife in the Water,” and onward, it seems that Polanski has a fascination with people who are trapped, both physically and mentally, and are forced to confront these restrictions face-to-face. Perhaps Polanski himself has often felt this way, and the fact that Thomas has a disturbing resemblance to a young Polanski bears the question: Is Thomas adapting “Venus in Furs” for the same reason Polanski is adapting “Venus in Fur?” Or, rather, is Polanski’s “Venus in Fur” a way for the director to express his views on domesticity, the bounds of sexual limitations, and the supposedly human desire to experience both pain and pleasure?

What ever the answer may be, Polanski does not make the film so intensely personal that it alienates the audience. On the contrary, “Venus in Fur” is, despite its subject material, one of Polanski’s most accessible films in years. Somehow, with two characters and one setting, “Venus in Fur” is one of the year’s most exciting films, one that refuses to take its inherently talkative nature and use it as a platform to lecture its audience. The way it discusses the evolution of sexual politics from the time of Masoch to the 21st century is as lively as any Hollywood blockbuster, and people willing to check their moral inhibitions at the door will undoubtedly have a fantastic time watching it.

Josef Rodriguez is a writer, filmmaker, and musician living in New York City. He is often labeled as "that guy who didn't love Boyhood" and he finds himself liking Harmony Korine films more than he likes his own friends. When he's not stressing over turning in reviews on time, Josef can be seen playing guitar, watching "Spring Breakers," or trying to write the next great American movie.
comments
Leave a reply
Add Comment Register

END_OF_DOCUMENT_TOKEN_TO_BE_REPLACED
Taylor Sinople Picks: The 16 Best Films of 2016
Form and Function in Alex Ross Perry’s “Queen of Earth&...
Digging for Fire and Unexpected: Husband and Wife Process Parenthoo...
Every Thing Will Be Fine 3D Review