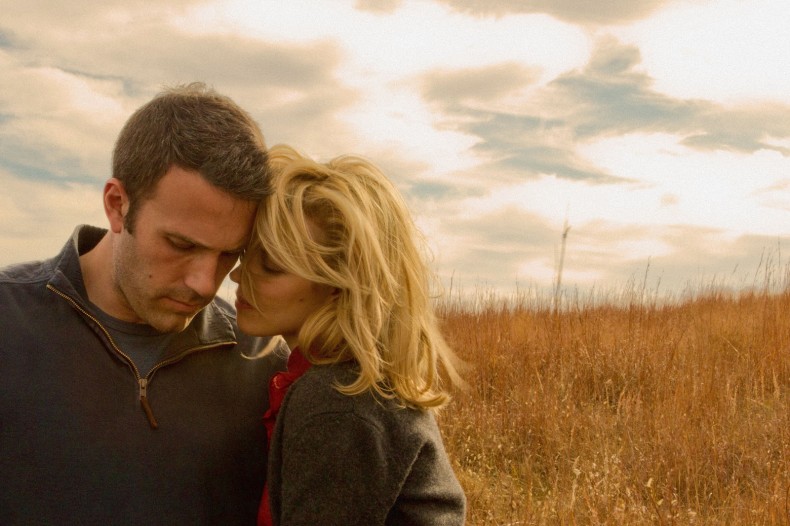 In Terrence Malick’s latest philosophical jaunt in cinema, To the Wonder, Neil (Ben Affleck) and Marina (French actress Olga Kurylenko) are deeply impassioned lovers that move to suburban Oklahoma, USA only to struggle with a suddenly deteriorating relationship in this new locale. There, Neil reconnects with his childhood friend and crush Jane (Rachel McAdams), and Marina visits a Spanish priest (Javier Bardem) who is having similar issues of dislocation from one’s homeland.

Like Malick’s great film The Tree of Life, and The Thin Red Line before it – the narrative unfolds as visual poetry. While the plot may have a beginning, middle, and end – it’s only for the sake of containing the content in some distributable way. Clearly, Malick and returning Tree of Life cinematographer Emmanuel Lubezki are interested most in using cinema as a tool of artistic expression and spiritual exploration. It’s beauty is undeniable, but while you will spend all the time you could ask for looking at character’s silhouettes stunningly set against magic-hour skies, it could be argued that a film owes its audience more. Unfortunately, there is not much more to be found in To the Wonder as the plot meanders and fails to connect. Even the central romance between Neil and Marina is largely ineffective despite the care you can feel was put into their motivations and short snippets of dialogue.

The film works best as an exhibit of the artistic properties of cinema. The performances are great on their own (particularly Affleck and Bardem), but they don’t work together in any satisfying way. Interpreted as a narrative film, To the Wonder will disappoint or befuddle many general audiences (there were several walkouts at my screening).

All the ingredients that have led Malick to be properly regarded as a brilliant filmmaker are present – sweeping steadicam shots, whispered monologues, and the big questions that are meant to stir in our minds after leaving the theatre. Yet even with the same technical ingredients, the film’s recipe lacks humanity, and heart. I find myself more interested in watching a film about Javier Bardem’s Spanish priest character, as it is the most intriguing and least resolved.  As it is, overindulgence overshadows considerable visual delight – check out or revisit 2011’s The Tree of Life instead.

Taylor is a Chicago-based writer and aspiring film historian. He is the editor here at TFP, and has contributed to a number of international publications such as Cinema Scandinavia, PopMatters, and Room 101 Magazine. He can also be found listening to podcasts, researching topics he has little use for, or running after a city bus.
You might also like
ben affleckterrence malickthe tree of life

by Taylor Sinople on July 13, 2014
In 1991, Richard Linklater reignited the indie scene with his wandering, Austin-set drama “Slacker,” which used arbitrary run-ins to pass the narrative baton between on-screen characters connected only by coincidence. “Slacker” was a niche hit, and has remained so to this day, but Linklater’s very next film, 1993’s “Dazed and Confused,” broke him into the mainstream. […]
comments
Leave a reply
Add Comment Register

END_OF_DOCUMENT_TOKEN_TO_BE_REPLACED
Taylor Sinople Picks: The 16 Best Films of 2016
Form and Function in Alex Ross Perry’s “Queen of Earth&...
Digging for Fire and Unexpected: Husband and Wife Process Parenthoo...
Every Thing Will Be Fine 3D Review