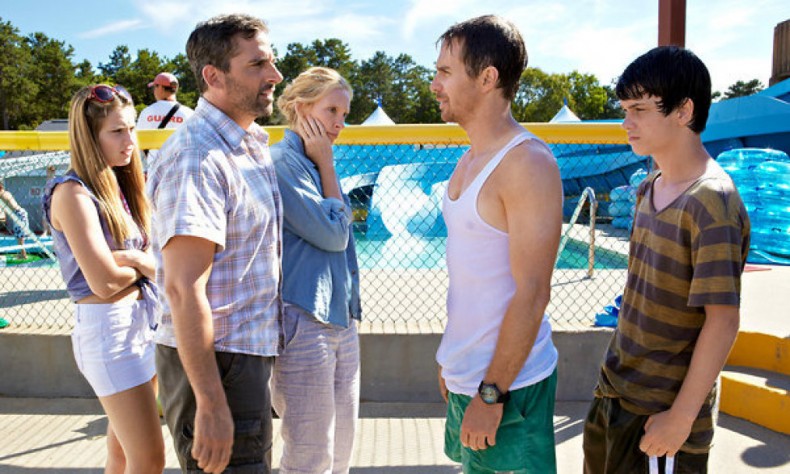 How about that for road trip discussion with your mom’s new boyfriend? So it is for fourteen-year-old Duncan in Nat Faxon and Jim Rash’s The Way, Way Back – a competent, if not somewhat thin coming-of-age picture that cashes in on the conventions of more successful indie-juggernauts to various degrees of success. It will certainly please fans of similar material, but isn’t the best example of just how adult stories about teens can be.

Duncan (Liam James) is the troubling portrait of teen youth today (according to indie movies, at least): socially inept, awkward as hell, and a little depressed. While his parents have moved on from the divorce, Duncan is still caught in the middle of the emotional battlefield of a broken marriage. It doesn’t help that mom’s new boyfriend Trent (Steve Carrell) is unkind and demanding. We meet all of them as they are travelling to Trent’s beach house for the summer.

Once arriving, Duncan finds his only respite from the likes of vacuous high school girls and trashy adults trying to relive spring break to come in the form of exploring the coastal town on a bright pink bike he finds Trent’s garage. It isn’t long after cruising around the town before Duncan has a chance meeting with Owen (Sam Rockwell), the outspoken, semi-charming manager of a local water park from a bygone era. Owen connects with Duncan – they are both misfits. Duncan is invited to work at the water park and it is there that he finds his place for perhaps the first time in his life.

Sam Rockwell’s Owen is plainly the best facet of The Way, Way Back – he is consistently hilarious spurting out rapid-fire quips of exceptional sarcasm. The rest of the water park’s staff (including directors Nat Faxon, Jim Rash, and SNL alum Maya Rudolph) makes up the side of the film that really works.

The domestic side of the coin is less appealing. Steve Carrell’s type-breaking performance as the unlikable Trent will draw a lot of interest, but the character isn’t led anywhere beyond being “the bad guy”.

In fact, the main problem with this film is that it is so thinly written. The dialogue between young people feels contrived, as if the writers are imagining what teens sound like today rather than hitting the sweet spot of plausible authenticity found in something like Superbad. Adult dialogue and the exchanges between Owen and Duncan work much more successfully.

Further, there seems to be a major element lacking that would distinguish it in some way. A similar summer-job-romance film, Adventureland, kicks off with the main character getting prepared to depart for a promising college career before losing the funding to do so and having to resort to working at an amusement park. That small nugget of plot is what I needed in The Way, Way Back to be fully on board. What we’re left with is, instead, a bit more middling.

We can learn a lot from Duncan, his mom (Toni Collette), and Owen. It’s all about looking at the situation around you and realizing you have the power to change it for the better, if only you have the courage to do so.

I wish only that I could have been spared the unfunny or frankly bizarre additions that harmfully undercut the potential of the script. Moments such as when Duncan enters a breakdancing ring, dances awkwardly, exits to ovation, and lands the new name Pop’n’Lock. What?!

Duncan and Owen’s strange part father-son, part brotherly friendship does amounts to a surprisingly touching climax. Their interactions are authentic, and it is easy imagine how someone like Owen could get roped into working at the water park indefinitely, despite being so eccentric and outgoing. It’s a pleasure to watch any film that can capture the essence of the youthful summer experience.

We first heard from Faxon and Rash from their Oscar-winning screenplay for Alexander Payne’s 2011 The Descendants. Here, they direct their first feature and go after the market paved by the likes of the tonally similar Little Miss Sunshine. It won’t surpass the quality of previous efforts in this arena of indie comedy, but The Way, Way Back will fit in nicely amongst them. Riding off the strength of the performances, Fox Searchlight picked up The Way, Way Back for $10M at Sundance US this year, and with an aptly chosen early July release it is likely to return the investment.

Taylor is a Chicago-based writer and aspiring film historian. He is the editor here at TFP, and has contributed to a number of international publications such as Cinema Scandinavia, PopMatters, and Room 101 Magazine. He can also be found listening to podcasts, researching topics he has little use for, or running after a city bus.
You might also like
allison janneysam rockwelltoni collette

by Josef Rodriguez on February 23, 2015
It may not diverge from the teen comedy formula at any moment, but The DUFF is hilarious and charming in all the right places, featuring two endlessly winning performances from Mae Whitman and Robbie Amell.
comments
Leave a reply
Add Comment Register

END_OF_DOCUMENT_TOKEN_TO_BE_REPLACED
Taylor Sinople Picks: The 16 Best Films of 2016
Form and Function in Alex Ross Perry’s “Queen of Earth&...
Digging for Fire and Unexpected: Husband and Wife Process Parenthoo...
Every Thing Will Be Fine 3D Review