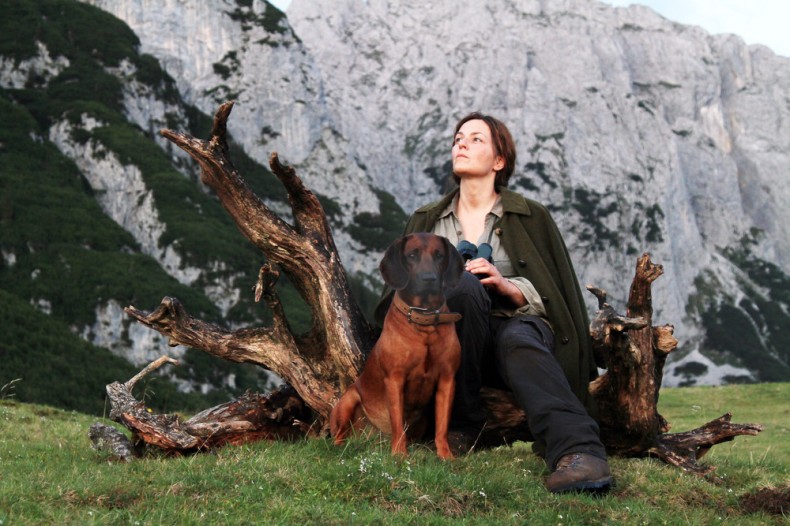 “The Wall” is an unforgettable experience that illustrates the human spirit as it both thrives and suffocates in isolation.

“I’m not afraid of the morning, only the long, gloomy afternoons”.

An unnamed woman (Martina Gedeck) is staying at a friend’s remote hunting lodge deep in the Alps. The two friends she came with went out the previous night to get some supplies from a nearby town, but never made it back. Now the next morning, the woman awakens to an empty home. The woman wanders down the dirt road that leads to civilization. She’s walking with her friends’ dog, Lynx, trailing behind lazily when she slams into an invisible barrier. A wall: cool and flat as glass. Impenetrable.

After coming to terms with the wall, the woman explores her surroundings, looking for escape in another direction. Beautiful, lush summer forests and sprawling valleys. Mountains in the distance, stars overhead. Every venture out either ends in having to turn back before nightfall, or an unexpected collision with the immovable, mysterious wall. As the days draw to weeks, the woman has no choice but to begin to survive on her own – planting potatoes, harvesting wheat fields, and taking care of her only companion: Lynx. She knows not if it will be tomorrow, or three years, or eternity before she can leave her new glassed-in world. All she knows is that she is completely alone.

Director Julian Pölsler’s German-made “The Wall” may evoke a number of films – the transcendentalist survival story of “Into the Wild,” the sci-fi twist of Stephen King’s “Under the Dome,” the existential musing of Bergman’s “The Seventh Seal.” But while all of these films are useful in referencing what “The Wall” is, they only loosely get at what “The Wall” is trying to do.

A powerhouse of existential ruminations, “The Wall” is appropriate perhaps exclusively to art-house audiences, but is nonetheless extremely rewarding to the patient viewer. It’s a cinematic conversation, an invitation to become immersed in the woman’s story and allow connections to your own life to form through her revelations.

As the months wear on and the seasons change, deep winter arrives in the Alps. The woman has lost hope of being rescued from her strange situation, and instead is focused on coming to understandings about loneliness, isolation, and her changing perception of self-identity. Who are you without the people that surround you? The sudden and seemingly permanent respite from the responsibilities of normal life is met with new burdens such as caring for the land and animals that ensure her own survival.

The sheer amount of time she has on her hands lead to the unearthing of many essential questions that will remain unanswered to most without the time or the care to consider them. To give too many of these themes away would be doing a disservice to a new viewer, but trust that this film has a lot to say.

The film says these things through the woman’s frequent narration. The plot occasionally flash-forwards to some time in the future in which the woman is in a dark cottage writing down a report of her entire experience inside of the wall up until that point. These diary entries are read aloud in English over much of the film. While these passages end up appearing too often, the narration is the brain and voice of the film. As it is only her and Lynx and a few other animals that she stumbles upon, there is next to no dialogue in the film. Outside of the narration, a few sequences of classical music, and the persistent hum of the wall, much of the viewing experience is intensely silent.

On screen are countless instances of exquisite beauty. Camerawork from six different cinematographers capture the woman’s plight – from stunning landscape photography to dark, underexposed, lantern-lit interiors. The vastness of the forest, clatter of rainstorms, and omnipresence of the wall itself is all made real by the skill of sound designer Marcel Spisak. When the camera passes outside of the wall, to areas the woman cannot reach, a sort of loud, bass-heavy silence captures the claustrophobic effect of being unable to leave even a very large area.

The true significance of “The Wall” is in its accessibility, its freedom of interpretation. Is the wall metaphorical, or is it just a device of a fantasy narrative? My allegorical assumptions are no more valid than yours. The joy is in discovering a personal connection; the thoughts you unveil during the viewing of this film will stay with you for days.

Successfully handling the pressure of carrying an entire film, lead actress Martina Gedeck thrives in her secluded performance as the woman forced to cope with an impossible change in her life. Gedeck is lightfooted, conveying an emotional energy behind her performance that says what the lack of dialogue cannot. While you watch the woman experience the distortion of time (summers fly by in an instant, winters last a decade), you begin to fall off the track of typical survival movie thought. It’s not the “what would I do” that is compelling, but what she will do – and what you can learn from it.

Taylor is a Chicago-based writer and aspiring film historian. He is the editor here at TFP, and has contributed to a number of international publications such as Cinema Scandinavia, PopMatters, and Room 101 Magazine. He can also be found listening to podcasts, researching topics he has little use for, or running after a city bus.
You might also like
the wall

END_OF_DOCUMENT_TOKEN_TO_BE_REPLACED
Taylor Sinople Picks: The 16 Best Films of 2016
Form and Function in Alex Ross Perry’s “Queen of Earth&...
Digging for Fire and Unexpected: Husband and Wife Process Parenthoo...
Every Thing Will Be Fine 3D Review