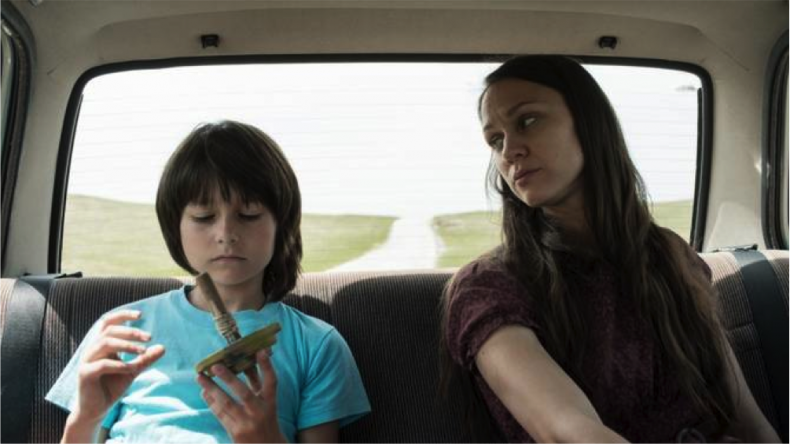 “The Tree” is a cinematographic masterpiece, but a lengthy and claustrophobic one at that.

At the sixteenth edition of international Dutch film festival Film By The Sea, Sonja Prosenc’s debut film “The Tree” won the Youth Jury Award. The jury remarked, “this is a film for film-fanatics.You have to dare to interpret the film in your own way and to be receptive for it.” After the distribution of the award in Vlissingen, The Netherlands, “The Tree”was screened to the greater public. The Youth Jury was certain about their decision, but the general opinion of the audience was divided.

“The Tree” is a haunting film about a mother and her two sons who are imprisoned in their own house. We watch the youngest brother, Veli, desperately trying to climb the walls of their courtyard, and cycling in circles in a space of 25 square meters while his mother, Melina, mourns her deceased husband and his older brother Alek is struggling with his own conscience. Together, they can never leave the house. From three different perspectives, we see how three different people cope with imprisonment and we discover the tragic reason behind it.

In some ways, Prosenc’s debut film is a masterpiece and rightfully awarded by Film By The Sea. The film’s story is about being imprisoned in your own house, about not being able to leave four stone walls and Prosenc captures this feeling perfectly. For the first half of the film, she uses a lot of tight shots. We see little Veli’s face so up-close that we can count his eyelashes and we can see the wrinkles on Melina’s satin dress. Prosenc’s film uses beautiful imagery to tell a tragic story. The titular tree, a strong motif in the film’s story, is pictured like something sacred and heavenly. The sunlight creeps through the idyllic green leaves and the wind toys with the branches and the straw fields surrounding it. Prosenc only pictures the tree in flashbacks, to support the story she wants to tell.

The only thing the viewer gets to see, is what Prosenc shows us – and that is one house and three people living in it. The effect of this approach is claustrophobic. This is the strength of “The Tree.” We, as the viewers of the film, can actually feel Veli’s impatience and curiosity towards the world behind the walls of their home. After half an hour of being locked up in this virtual reality, we desperately want to get out as well.

Eventually, this happens. From Melina’s perspective, we travel back in time and learn that there was a time the family could leave their house. She took her sons to the city and they ate ice-cream. The contrast between the first part of the film, which only took place between four stone walls, and the second part, where we actually see the world around them, is dramatic. The music becomes lighter, while Prosenc leaves out the tighter shots and makes room for more wide framings of her main characters and their surroundings. This is such a relief, for both the characters in the story and for the viewers, but the relief arrived too late.

That is Prosenc’s one, lethal flaw. “The Tree”is too lengthy and after a while, you want this imprisonment to be over, almost as desperately as the main characters. It is a very slow-paced film, without the use of much dialogue or soundtrack. The only material you have, are the claustrophobic and oppressing images and you have to work with that. It is too little and too much at the same time. On the one hand, you do not have enough material to stay focused on the film, but on the other, “The Tree”gives you so much imagery that it becomes an overkill. This is especially the case in the first part of the film, when the family cannot leave their house. The second part gets better, but by the time “The Tree”becomes enjoyable again, the third and final act arrives and suddenly the family is back where they started: haunted by guilt and claustrophobia.

“The Tree” appears to be its own worst enemy. The film’s strength, the fact that it is in perfect symmetry with the story it wants to tell, is also the film’s weakness. Prosenc’s directing is beautiful, but claustrophobic and oppressing, and this backfires because of the slow pace and lengthiness of the film.

END_OF_DOCUMENT_TOKEN_TO_BE_REPLACED
Taylor Sinople Picks: The 16 Best Films of 2016
Form and Function in Alex Ross Perry’s “Queen of Earth&...
Digging for Fire and Unexpected: Husband and Wife Process Parenthoo...
Every Thing Will Be Fine 3D Review