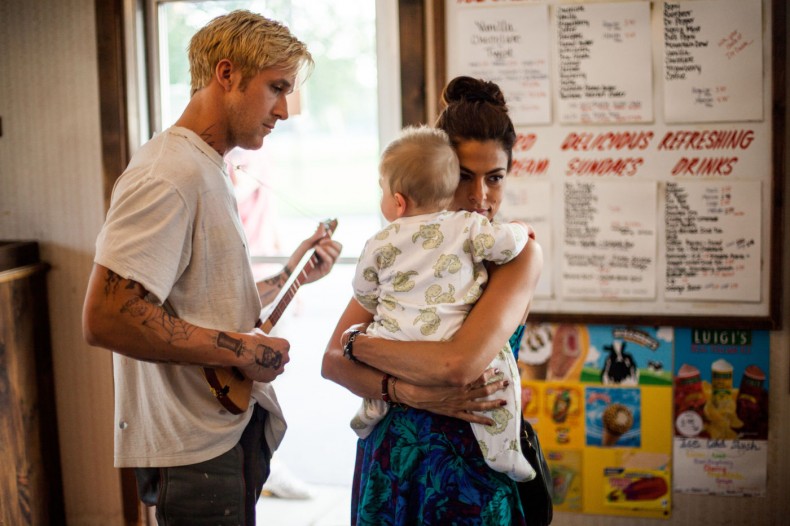 To what extent are we a product of our environment? Of our upbringing?

The Place Beyond the Pines is a gripping and remarkable crime drama from director Derek Cianfrance about the impact of father-son relationships and the unforeseen nature of tough decisions. It is nearly masterful. Cianfrance’s experience in quiet, intensely intimate dramas like 2010’s Blue Valentine elevate what could have become an overambitious, overwritten mess to greatness through its precise and complex performances and thrilling technical flourishes.

The frequently controlled Ryan Gosling lets loose a little bit here and lands his best role yet as Luke: a carnival motorcycle stuntman with bleach-blonde hair, tattoos, and a seemingly endless cigarette between his lips. We meet Luke as he runs into former fling Romina (Eva Mendes) and finds out she has a baby – his baby. Luke decides to drop out of the circus game to care for his son but hits a wall when he discovers Romina has a new man now. The passion is still there between Romina and Luke, but the money is not. To get the cash together to support his new family and edge out the new boyfriend, Luke gets a job working as a shop mechanic for a backwoods redneck (Ben Mendelsohn). There, said redneck tells Luke that years ago he robbed four banks – and that it was pretty easy, too. He also tells Luke that a motorcycle rider with considerable skill would be perfect to escape a robbery.

From here, the decisions Luke makes collide with and forever impact the life of beat cop Avery Cross (Bradley Cooper). Cross makes small-time fame after he takes down a criminal, but his newfound popularity exposes him to the underbelly of the beast that is the deeply corrupted Schenectady, New York police department. Also in the mix is the story of two high school friends (Emory Cohen & Dane DeHaan) that spiral into lives of petty crime despite very different upbringings.

The progression of these stories and their relationship to one another is one of the most successful achievements writers Derek Cianfrance, Ben Coccio, and Darius Marder offer – you will not expect the turns the film doles out. Each component of the story has been polished to reflect different stages of the father-son dynamic. The thematic content is broad, but highlighted through these specific stories beautifully.

The ensemble of talent assembled here, which also features Ray Liotta and Harris Yulin, is impressive in its very existence. Luckily, director Cianfrance sculpts each character successfully – the majority of the cast is acting in top form. Those who were not impressed with Goslings subdued, static performance in 2011’s Drive will find more to hold on to here. Similarly, Bradley Cooper reinforces his emergence as an actor to be taken seriously with a role that challenges him to personify deep internal conflict at a wide range – from anger to humility.

The technical components are masterful. Cinematographer Sean Bobbitt (Shame, Hunger) uses an exciting scope of imagery to tell the story in always compelling ways. Specifically, Bobbitt uses an uncompromising mirco-examination of human interaction to great success. The film opens with a several-minute long take as Gosling’s character travels from his trailer, through the carnival, and into the tent where his motorcycle act is. It won’t quite bring you back to Copacabana in Goodfellas, but this sort of flourish right out of the gate prepares you for the type of imagery you will absorb throughout the entire narrative. Other techniques include excellent micro-detail shots that focus on the faces of the characters. The eyes and hands of characters are important. The scope of imagery ranges from these close-ups during quiet dialogue, to very wide, purely lyrical landscape photography to provide breaks from the dramatic action.

The film travels along briskly despite running nearly 2.5 hours. It may be slightly overlong, but no sequence offer clear opportunity for a cut – this is how long the film needs to be. Writer/Director David O’Russell has said that a film had better have a damn good reason for going over the two-hour mark. It was a pleasure to discover the rare film that is not just worth the time, but better spent because of it. The Place Beyond the Pines is one of the best films released this year.

Taylor is a Chicago-based writer and aspiring film historian. He is the editor here at TFP, and has contributed to a number of international publications such as Cinema Scandinavia, PopMatters, and Room 101 Magazine. He can also be found listening to podcasts, researching topics he has little use for, or running after a city bus.
You might also like
ben mendelsohnbradley cooperHeistsryan gosling

by Josef Rodriguez on August 21, 2014
Filled with gut-wrenching performances and not a hint of sentimentality, “Starred Up” is a raw, emotional journey into one of the UK’s most dangerous prisons.
Comments
Leave a reply
Add Comment Register

END_OF_DOCUMENT_TOKEN_TO_BE_REPLACED
Taylor Sinople Picks: The 16 Best Films of 2016
Form and Function in Alex Ross Perry’s “Queen of Earth&...
Digging for Fire and Unexpected: Husband and Wife Process Parenthoo...
Every Thing Will Be Fine 3D Review