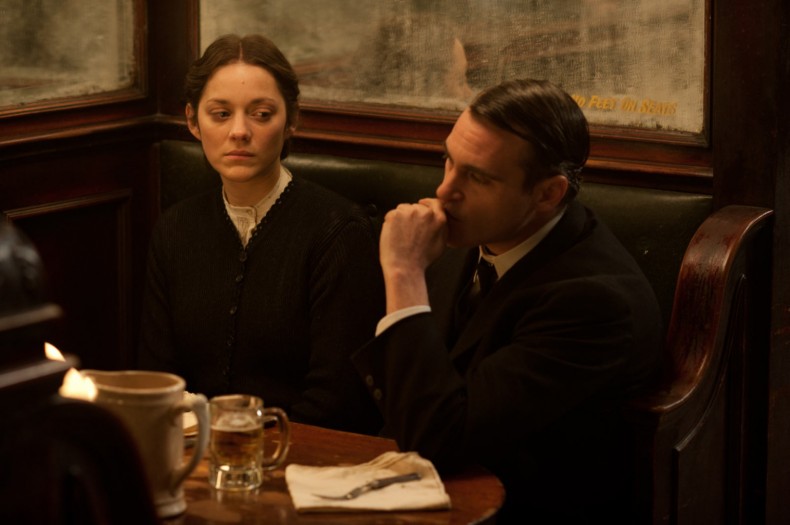 Phoenix and Cotillard’s performances make “The Immigrant” mostly worthwhile despite a lackluster production.

Many of the millions of immigrants in the early 20th century felt despair at the realization that the “American Dream” was but a façade. “The Immigrant,” like most historical fiction about struggle and oppression, chooses just one character’s experience to inform a universal one.

When Ewa (Marion Cotillard) and her sister Magda (Angela Sarafyan) arrive at Ellis Island from Poland, they discover how quickly someone that has worked so hard to get somewhere can be tossed back. Magda is sent to the infirmary under suspicion of lung disease, and Ewa is deported – the American inspector citing “low morals.” While she’s being escorted back to the boat, Bruno (Joaquin Phoenix), a powerful and mysterious man, bribes an officer, freeing Ewa and taking her into Manhattan. With no money and few skills, Ewa has no choice but to cling to Bruno’s lifeline, even as she begins to understand the role he intends her to play in his shady business.

The strength of these types of films typically lies in a willingness to take the audience into the depths of lost hope that surround characters like Ewa. Screenwriters James Gray (who also directed) and Ric Menello, though, seem to be afraid of commitment. They make swiss cheese of their screenplay, poking holes for an unnecessary chase scene here, a random side-trip into magical realism there, until there’s not much surface area left for the actual drama (which, when given screen time, is good). Still, while the film is flimsy on paper, it doesn’t change the serious pull gained by bringing together leads Phoenix and Cotillard.

Phoenix has been collaborating with Gray for years (“We Own the Night,” “Two Lovers”), so it comes as a surprise that he initially appears to be giving a bland performance here, especially after making such a name for himself in recent years in “The Master” and “Her.” But as the film goes on, it becomes clear that Phoenix isn’t bland, his character is. Bruno’s generosity laced with criminal tendencies leave him stranded in the no-man’s-land of society – a savior to some, a crook to others. His occasional fits of rage reveal that this tenuous personality is merely a front for deeper issues with women and his own worth.

Cotillard, the under-appreciated French actress, brushes up on her Polish in “The Immigrant” and plays against type as a shy and standoffish woman that has no choice but to trust anyone that offers her help. Cotillard has never played a character that has less control over her own fate than Ewa. Even in 2012’s “Rust and Bone,” her best work, she manages to maintain her characteristic, impassioned fire. In 1920’s Manhattan, the fire is out, and Ewa is left with the upwards battle to find leverage in a system that’s designed to take advantage of her.

Together, Phoenix and Cotillard are a definite redemption for the film, and they just about pull their characters into something resembling memorability. Even an hour after the film has ended, however, the lasting taste seems to settle on emptiness.

A third character, a magician by the name of Orlando (Jeremy Renner), enters to spar with Bruno over Ewa for unclear “because the movie says so” reasons. It’s here that we realize Ewa has gotten most places in America because other men find her beautiful. Maybe this is realistic, but it definitely leaves a scummy mark lingering while Gray attempts to maneuver us into rapidly accepting a romance without providing the runtime or care to sell it. Interestingly, Renner is the charming and electric personality that the otherwise dry film needs, but he’s also the only one that feels too modern a performer to fit in with these excellent period players.

Happy Massee, the production designer, does nearly all the heavy lifting that keeps this film in the 20’s. Many interiors are stunning to look at – none moreso than the seedy theatre where Bruno puts on burlesque shows. Sadly, Massee’s work is the best part of the production of “The Immigrant.” Like a lot of relatively low-budget period pieces, “The Immigrant” suffers from some bad color grading that blows out skies into white canvases and does blotchy, yellow-y things to the skin tones.

Most shocking in terms of production pitfalls is the fact that master cinematographer Darius Khondji (“Midnight in Paris,” “Se7en”) shot the film. Khondji has always been capable of ingenious scene coverage – he nimbly captures several of the burlesque shows as characters interact backstage, on stage, and cross back and forth between the two settings. But there is just nothing interesting about most of the photography used. There are attempts at effects, the odd dolly move or foreground element, but these aren’t put to any practical or thematic use. Then, Khondji hits us with an absolutely brilliant, era-defining final shot and we wonder, “What the hell happened with the rest of the film!”

If Gray ultimately finds any resonance with “The Immigrant,” it’s likely because of the way that he paints his characters’ moralities. Bruno and Ewa each subvert their pre-conceived roles as underdog hero and villain to reveal fantastic shades of grey. These are the best moments of the film because they invite us to participate rather than be fed more and more story. Can you excuse Ewa stealing money, considering her situation? What if it’s stealing from a prostitute? What if she became a prostitute?

Phoenix and Cotillard both get their noteworthy moments in before it’s all done, but this limited-run festival film feels a draft or two away – in all departments – from achieving the wide release it should have with such a strong cast.

Taylor is a Chicago-based writer and aspiring film historian. He is the editor here at TFP, and has contributed to a number of international publications such as Cinema Scandinavia, PopMatters, and Room 101 Magazine. He can also be found listening to podcasts, researching topics he has little use for, or running after a city bus.
You might also like
James GrayJoaquin PhoenixMarion Cotillard

by Zack Miller on July 20, 2014
Here’s what’s new to Netflix Instant for the week of July 14. Top Picks The Master (2012) Directed by Paul Thomas Anderson Despite there being six years of releases yet to come, “The Master” has already all but guaranteed a spot in my top 10 of this decade. The title is incredibly apt, considering the […]
Comments
Leave a reply
Add Comment Register

END_OF_DOCUMENT_TOKEN_TO_BE_REPLACED
Taylor Sinople Picks: The 16 Best Films of 2016
Form and Function in Alex Ross Perry’s “Queen of Earth&...
Digging for Fire and Unexpected: Husband and Wife Process Parenthoo...
Every Thing Will Be Fine 3D Review