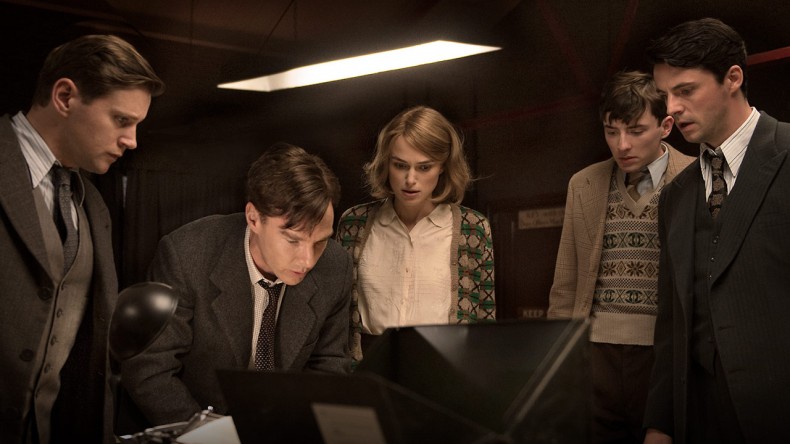 Morten Tyldum’s sophomore feature, based on the life of Alan Turing, is an emotionally charged biopic that turns its fact-based story into, surprisingly, a beautifully rendered romance about young love and a man’s relationship with memory and machine.

In depicting the life of Alan Turing (Benedict Cumberbatch), a brilliant mathematician who created the first computer during World War II to break a Nazi correspondence code known as Enigma, director Morten Tyldum has created one of the year’s most socially conscious films, one that skillfully touches upon the idea of equality and technology in the modern age. From his days as a lowly schoolboy in the late 1920s to his eventual suicide as a result of hormonal therapy in 1952, Alan Turing was never accepted for who he was, but he continues to be one of the most significant figures in contemporary world history.

During World War II, the Nazis created a new kind of encryption device that was thought to be unbreakable. Recruited by the British High Command, Turing was brought on to decrypt the undecryptable with a team of associates who, for the first couple of years, couldn’t stand the man who spent all of his time building a machine that, according to them, probably wouldn’t even work. However, through the support of Joan Clarke (Keira Knightley), a brilliant young woman on Turing’s team with whom he eventually becomes engaged, Alan is able to build the world’s first computer, which he calls Christopher.

Functioning as almost a historical antithesis to Spike Jonze’s “Her,” “The Imitation Game” finds all involved operating at the height of their respective powers. As Alan Turing, Benedict Cumberbatch gives what is possibly a career best performance. From his service during World War II to his eventual persecution – as a result of his well-concealed homosexuality – Cumberbatch embodies the role of Turing without ever losing sight of the nuance of Turing as both a character and a human being. Keira Knightley, as well, continues to be a walking and talking chameleon in an industry of typecasted, two-note professionals. One would be hard-pressed to find an actress who so effortlessly assimilates into any ensemble or era in the same way that Knightley does, and she proves yet again that she is one of Hollywood’s most sorely undervalued actresses.

As with most biopics, “The Imitation Game” does a bit of temporal hopscotch, alternating between Turing’s childhood, his work during the war, and his eventual conviction. However, there’s something about the film’s framework that feels more structured than many other biopics that are cut from the same cloth. Instead of arbitrarily cutting from one timeline to the next, Tyldum smartly weaves them in together with hanging voiceovers and subtle callbacks that only function properly in its final form. It’s arguable that the impact of most biopics wouldn’t be dulled if the events were organized chronologically, but “The Imitation Game” distinguishes itself from the rest by relying as much on its structure as the events that transpire within it.

One could make a case for the exclusion of scenes involving Turing’s school days, but Tyldum’s film is mostly able to have its cake and eat it, too, with a sensible running time that makes room to develop its characters as more than animated speakers through which expository dialogue is expounded. That alone is enough to label “The Imitation Game” as the year’s most accomplished biopic, and Tyldum is often able to do in one or two shots what some filmmakers can’t with ten pages of dialogue.

The complexity of the relationships between Turing and his peers, his machines, and himself are all presented beautifully throughout the film without compromising cohesion or its relatively wide appeal. “The Imitation Game” never forgets to check off every box in the laundry list of requirements for an Oscar-nominated-biopic, but it does so with a finesse and an artistry rarely seen in high-profile prestige pictures such as this. In terms of films that sometimes feel like extended introductory montages for the nomination screen, “The Imitation Game” is just about as good as it gets.

Josef Rodriguez is a writer, filmmaker, and musician living in New York City. He is often labeled as "that guy who didn't love Boyhood" and he finds himself liking Harmony Korine films more than he likes his own friends. When he's not stressing over turning in reviews on time, Josef can be seen playing guitar, watching "Spring Breakers," or trying to write the next great American movie.
You might also like
Benedict CumberbatchKeira KnightleyMark Strongmatthew goode

by Taylor Sinople on December 15, 2013
“Violet, my wife, she takes pills,” Beverly Weston tells her, “sometimes a great many.” Johnna is interviewing for a job in Beverly’s (Sam Shepard) very large and very empty Oklahoman home. She is to be tasked with preparing food, cleaning, and driving Beverly’s wife to chemo treatments for her mouth cancer. Just as Beverly is […]

END_OF_DOCUMENT_TOKEN_TO_BE_REPLACED
Taylor Sinople Picks: The 16 Best Films of 2016
Form and Function in Alex Ross Perry’s “Queen of Earth&...
Digging for Fire and Unexpected: Husband and Wife Process Parenthoo...
Every Thing Will Be Fine 3D Review