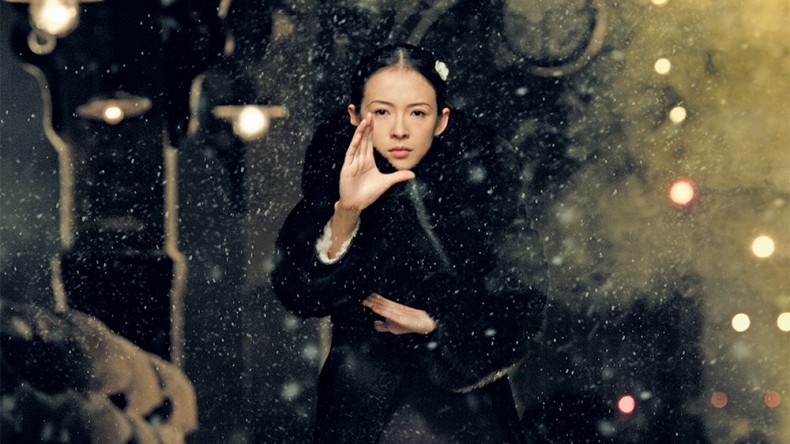 Wong Kar Wai’s “The Grandmaster” is a Kung Fu biopic with a heap of potential that is marred by an unfocused plot and off-tilt pace.

Note: This review is based on the 108 minute US/UK cut of the film

“The Grandmaster” is Wong Kar Wai’s odyssey of the life of iconic Chinese hero “Ip Man” – a martial arts master and notable trainer of the likes of Bruce Lee. It’s been an arduous journey to the big screen with a decade’s work put into the research and production of the film. Kar Wai is a veteran filmmaker that uses skillful direction to weave a historical narrative into the Kung Fu construct, but “The Grandmaster” lacks the light-footed delicacy of his previous works that include “2046” and the splendid “In the Mood for Love”. It’s a biopic that’s only half about its subject, and the high quality work from Kar Wai is considerably deflated with pacing and content issues.

“The Grandmaster” picks up with Ip Man (Tony Leung) in the 1930’s while he’s living in Foshan, China. Having led a mostly unremarkable life up until this point, Ip Man’s existence is altered when Gong Yutian (Qingxiang Wang), the grandmaster of the North, arrives to announce his retirement and appointment of Ma San (Jin Zhang) as the new master of martial arts. Gong Yutian tasks the people of the South with sending forth their own Southern master to challenge him and the community elects Ip Man.

Ip readies for the match against Gong Yutian. He is highly skilled in physical ability, but it’s his spiritual dedication to Kung Fu and philosophical intelligence that wins him the fight. The rest of the fragmented primary story follows Ip’s progress as he survives the Second Sino-Japanese War, popularizes the Wing Chun fighting style, and becomes a legendary trainer in his late years before dying in 1972.

Also packed into the film is a dominating subplot involving Gong Er (Ziyi Zhang), daughter of Gong Yutian, as she copes with being denied honor and prestige for being a woman. Gong Er fights back against Ip Man’s threat to her family’s legacy and the two develop an unspoken bond. “The Grandmaster” isn’t about the race to the last, big fight. There is no finale against the ultimate opponent – the opponent is death itself, and the threat of a life being wasted not doing noble things.

There are many pieces of a great movie here, but they lack the connecting pieces between one another to form the complete puzzle. Every piece that impresses with thoughtful dialogue is met with a piece that feels unfocused and forced in. Ugly, choppy slow motion effects and breakneck-paced rapid-edits obscure the action rather than capture it in intelligible ways. Avoid sitting in the first ten rows if you hope to follow the fights. Only occasionally does the combat slip into the stunning, high-speed fluidity of better-photographed Wuxia-influenced films (Christopher Doyle’s work on “Hero” comes to mind).

A larger problem comes from the overall production design. The tone is excessively singular – muted, with little use of color outside of a few interesting wardrobe choices. What that means is that as Ip Man moves from Foshan to Hong Kong, his life changes – but the look doesn’t. We get more of the same warm, dimly lit interiors. Wood, soft light, muted colors. His change in location is meant to break apart the geographical scope of the story but without an accompanying change in visual approach it makes the 2 hour run-time feel longer than it is.

Nonetheless, there are a handful of beautiful sequences here shot by French cinematographer Phillippe Le Sourd who captures the story with a contemporary flair for style. Macro shots show the opponents’ feet finding balance on a wooden beam after pouncing into the air. A slowly spinning overhead shot provides brief respite from the chaotic fighting. These fun shots are thrown in all too sparingly, and the edit rarely cuts to the wide shot; the Kung Fu action is largely a blur. Good for intensity, bad for comprehension.

Despite the hyper-speed edit, that blur is well choreographed by renowned stunt coordinator Woo-pin Yuen (“The Matrix”, “Crouching Tiger, Hidden Dragon”). The stunts in “The Grandmaster” are a little off-putting because they straddle the line between brutal realism and gravity bending. For a biopic, moments that defy the laws of gravity and sends characters flying through windows after being kicked feel inappropriate (albeit entertaining). It comes down to whether each viewer is looking for raw entertainment or a strictly authentic character study. Fortunately, “The Grandmaster” is at its best when Kar Wai uses in-scene set pieces to raise the stakes. One outstanding fight sequence has Gong Er squaring off against her brother for the honor of carrying on the family’s name and legacy. They spar on a train platform during a snowstorm as a train is roaring by. The threat of being pushed into the moving train feels real and dangerous.

That train sequence thrives on sound design – and much of the rest of the film does, too. The aggressive pace of the fights are characterized by the deep thumps of punches and kicks, the sharp splintering of wooden beams, and the shattering of glass. All of these effects are beautifully used, but surprisingly most effective in their occasional absence when we are allowed into the intensely focused mind of Ip Man during a fight. During these stylish moments, the pace slows down and all sound effects are dropped. Intense silence communicates the calm concentration of the Kung Fu expert and gives you more of a sense of Ip Man’s deep understanding of the craft than any flurry of impressive full-speed action could.

This spiritual understanding is in fact the driving force behind the film. It’s no surprise that Kar Wai Kung Fu film isn’t much of a Kung Fu film. It’s a story of honor, oppression, and redemption that’s not afraid to spend a great deal of time on the philosophical musings of Ip Man. There are all sorts of wise tidbits in which the characters use analogy to assert their views on the purpose of a man’s life. Ip Man refers to his life as a series of seasons – commenting that when the Japanese assaulted China he went from spring to winter.

Longtime Kar Wai collaborator Tony Leung stars as Ip Man and brings his knack of coming off as both experienced and young. In a recent screening of the film in Chicago, IL, Leung discussed the struggle of getting into the head of Ip Man when he was essentially unknown before the age of 40. Leung used Bruce Lee as a strong influence to the character, along with his own ideas of what the legendary master was really like. Leung was assigned a year of Kung Fu training, but was also responsible for a heavy load of historical research ranging from the history of the New Republic period to the life of Bruce Lee. The extra work put into the role is all in an attempt to channel some of the spiritual dedication the real Ip Man had to martial arts. It resulted in Leung breaking his arm twice over the course of the four-year shooting schedule that took the production all over China.

This dedication to telling the story the right way can be felt from the film’s early scenes that are frequently punctuated with on-screen text to advance the story.

It’s unfortunately rare to be asked to read during a film, but here it feels truthful to the legacy of Ip Man. Similarly, narration from Ip Man beautifully book-ends the opening and closing of the film. Things only get mucky with the inclusion of Gong Er’s subplot. Ziyi Zhang (spectacularly) plays Gong Er as the aspiring female fighter seeking her own place in the family legacy. Her plot is actually somewhat more interesting than Ip Man’s. Zhang’s performance is a subtle, unexpected delight. The original cut of the film was four hours long, and the butchering of that version leaves us with a story only half about the man it is supposedly telling the life story of. The rest is Gong Er’s story – a fictional character that deserves her own film but intrudes in this one. It’s incomplete, and feels overlong yet also not long enough to complete the arcs.

The take-away is that “The Grandmaster” is a compelling, well-constructed story that received a poor chop-job in postproduction. The right parts of the story aren’t expanded on, and the promise of Ip Man’s story being told in grand Kar Wai style just isn’t delivered. I was impressed with Kar Wai’s examination of the soul of the Kung Fu master, but ultimately passed in and out of interest with the film’s story.

END_OF_DOCUMENT_TOKEN_TO_BE_REPLACED
Taylor Sinople Picks: The 16 Best Films of 2016
Form and Function in Alex Ross Perry’s “Queen of Earth&...
Digging for Fire and Unexpected: Husband and Wife Process Parenthoo...
Every Thing Will Be Fine 3D Review