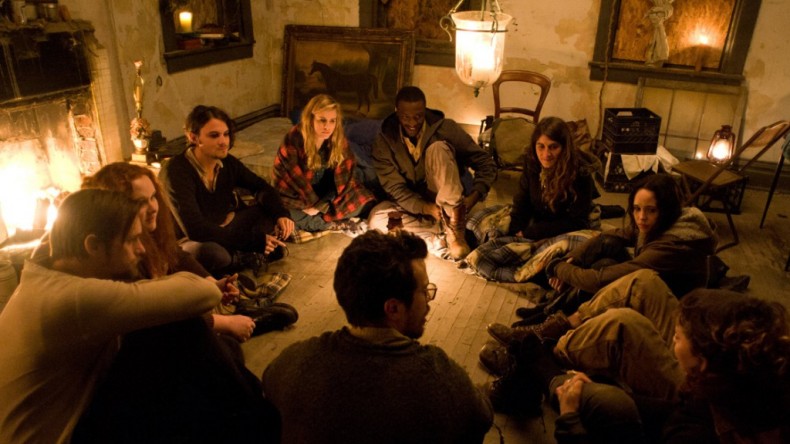 At what point do “up-and-coming” artists become established? It’s often difficult to pinpoint, even in retrospect. One moment, they’re making “promising” work, but before you know it you hear from them as an authority, or you don’t hear from them at all. When did Stanley Kubrick become something more than “someone to look out for”?

Eco-anarchist thriller The East from director Zal Batmanglij is a strong contribution to the shedding of his “up-and-coming” tag after only two films. The East is co-written by Batmanglij and star Brit Marling, a second effort after previously working together on The Sound of My Voice. With this new film they again take us into the interior lives of extremist communities and the personalities that lead them. The difference here is in moral ambiguity – you’ll have to decide for yourself what constitutes extremism. Is it the anarchists, or the government?

The East is an organized rogue group of radicals that take an “eye for an eye” approach in serving justice to corporations that create products that destroy the environment and harm the population. These demonstrations (called “jams”) are highly publicized attacks against figureheads of such corporations. The opening depicts an oil company’s CEO finding his home flooded with the very oil that was spilled into the sea by the barrel under his watch.

Sarah’s first assignment as an independent spy is to infiltrate the anarchist collective and learn of their identities and future plans. To do this, Sarah will have to become the ideal new recruit for The East. She begins by joining up with some drifters as they travel illegally in train cars. After Sarah is injured, one of the lowlifes takes her to the headquarters of The East – a giant, dilapidated home far off the road – for some amateur stitches.

The half-dozen or so members of The East stationed at the home first look at Sarah with extreme apprehension. Izzy (Ellen Page), is especially wary of Sarah’s presence. The leader of their group, Benji (Alexander Skarsgard), insists that Sarah is allowed to stay. And just like that, the undercover operative is in.

A little too easy? Sure, but this is a film that’s interested more in entertainment and suspense than in realism – and that’s okay, because the quality in most respects is very high. More on that later.

The moral complications involved in operating under deep cover are quickly explored when Sarah is taken along for a jam that targets a pharmaceutical company producing medicine that has fatal mental and physical side effects. When Sarah realizes that part of the plan involves people getting hurt, she calls her boss to figure out what to do, how to stop the jam. Speaking of the pharmaceutical reps at risk, her boss responds, “They are not my client.” At what extent is Sarah helping the world if she can only help the people that paid for it?

Before long, Sarah begins to fall in love with Benji and even begin to agree with the radical political alignment of the group to an extent. Whether it’s genuine or Stockholm syndrome is up to the viewer. The film is most poignant when Sarah returns home and realizes she may have lost part of her place in the world – lost a part of herself, to The East.

Just prior to the first day of production shooting The East, Occupy Wall Street happened. It is easy to imagine an anarchist group like The East – or the real life conglomerate Anonymous – taking part in these kinds of violent defensive displays. I can’t imagine the excitement and pressure the filmmakers felt knowing the relevancy they had on their hands. Fortunately, that didn’t translate to a rushed project.

Production design is the champion here. When Sarah first arrived at the headquarters home I had no idea if I was looking at immaculately constructed sets or a real location – I still don’t. The home is rotting and falling apart, yet a community of genuinely inspiring friendships thrives in it. The members of The East eat food scavenged from dumpsters that businesses are legally forced to throw out. What could we be doing with this perfectly good food to help the starving? In this way and others, director Batmanglij creates thought-provoking work that never talks down to its audience or pushes some kind of political agenda. The film is the opening of a discussion, not the closing statement of a lecture.

Batmanglij’s first film, The Sound of My Voice, was shot on a micro-budget with a Canon 7D DSLR in a suburban basement. Thank god someone gave him some money to make The East; it is thrilling and refreshing in both form and cultural relevance.

Taylor is a Chicago-based writer and aspiring film historian. He is the editor here at TFP, and has contributed to a number of international publications such as Cinema Scandinavia, PopMatters, and Room 101 Magazine. He can also be found listening to podcasts, researching topics he has little use for, or running after a city bus.
You might also like
brit marlingConspiracyellen page

by Taylor Sinople on May 18, 2014
Moving and intellectually stimulating, "I Origins" succeeds as a low-budget sci-fi with big emotional pay-off.
comments
Leave a reply
Add Comment Register

END_OF_DOCUMENT_TOKEN_TO_BE_REPLACED
Taylor Sinople Picks: The 16 Best Films of 2016
Form and Function in Alex Ross Perry’s “Queen of Earth&...
Digging for Fire and Unexpected: Husband and Wife Process Parenthoo...
Every Thing Will Be Fine 3D Review