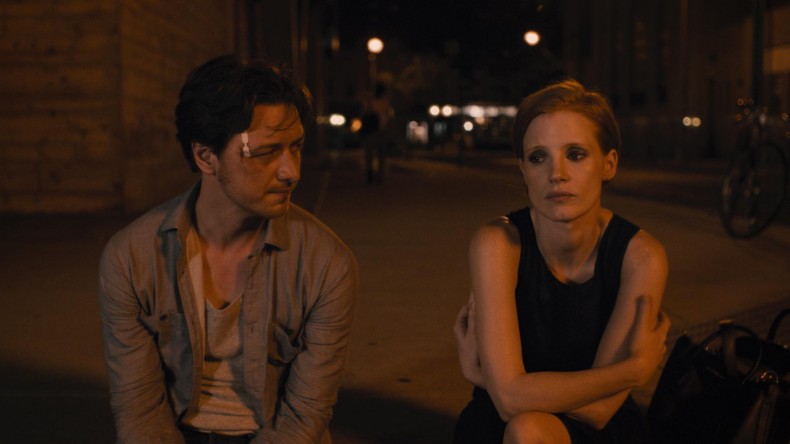 Although “Eleanor Rigby’s” script doesn’t always rise to the occasion, it features some of the year’s best performances, and a truly well-crafted romance from first-time director Ned Benson.

The first in a story of three perspectives, writer-director Ned Benson establishes a unique form for his endlessly ambitious debut, “The Disappearance of Eleanor Rigby.” This initial picture in the triptych, subtitled “Them,” depicts the disintegration of a marriage between Conor (James McAvoy) and Eleanor (Jessica Chastain), a couple of unceasing love that have been torn apart due to tragedy. A recent suicide attempt leaves Eleanor at a crossroads, living back at home in her parents’ Connecticut neighborhood while taking Identity Theory classes at Cooper Union from a silver tongued professor (Viola Davis) with whom she forms a friendship. Conor, on the other hand, is the owner of a flailing restaurant on the cusp of bankruptcy, and a living arrangement that involves rooming with his father (Ciaran Hinds), a successful restaurateur, forces him to reevaluate his decision to get into the family business.

These two wandering souls who were once united by fate are now lost in the hazy labyrinth of loss and regret, trying to find their way back to something that resembles normalcy. Both McAvoy and Chastain turn in excellent performances, beautifully conveying the layers of heartbreak involved with their separation while also making honest attempts to find happiness in their own lives. Chastain, in particular, makes a complete departure from much of her earlier work, revealing a far more vulnerable side to her acting that most audiences probably haven’t seen before.

Even so, McAvoy should not be dismissed, having turned in two of the most polar opposite performances of 2014, the other being the Scottish-bred “Filth,” which could not be more different from his work here. Bill Hader shows up for a few minutes as Conor’s best friend/chef Stuart, and I’m anticipating more screentime in Benson’s “Him” cut of the film, especially after his brilliant work in Craig Johnson’s, “The Skeleton Twins.”

One of the film’s pleasant surprises is that it doesn’t contrive situations for Conor and Eleanor to encounter each other randomly. Their intermittent confrontations throughout the film come naturally and organically, and I think Benson communicates a bold statement in doing so, which is that his film is not necessarily about togetherness, but the unbearable pain of being separated, whether it be by something as insignificant as a couple of blocks or something as insurmountable as death. In this regard, Benson sticks to his guns, making the scenes where McAvoy and Chastain share the screen into a reward instead of an obligation.

Unfortunately, Benson’s work on the script is not up to par with the cast or the ambition, and the film suffers heavily from hackneyed dialogue, which tends to bring down some of its better sequences. In terms of framing and structure, “Eleanor Rigby” is one of the best cinematic experiments of the year, matching “Boyhood” in its audacity to stretch the limits of what is possible in commercial filmmaking. However, there are certain intimate moments that become hampered by cliched and predictable dialogue, some of it unbearably schmaltzy and struck with an acute predilection for omphaloskepsis.

Thankfully, the film powers through, and the beautiful cinematography from DP Christopher Blauvlet does wonders for “Eleanor Rigby” when its auditory component just isn’t enough. The film never asks for its laughs or its tears, but earns both in spades as one perspective of this uniquely humanistic tale of love after loss. I, for one, will be eagerly awaiting Benson’s “Him” and “Her” cuts, but those disinterested in embarking on this epic journey should find that “Them” is a suitable replacement. It may not work with the conceit of a fuzzy hindsight like its two companion pieces, but it’s a hugely affecting and rich story, and one of the best romances committed to screen in a long time.

Josef Rodriguez is a writer, filmmaker, and musician living in New York City. He is often labeled as "that guy who didn't love Boyhood" and he finds himself liking Harmony Korine films more than he likes his own friends. When he's not stressing over turning in reviews on time, Josef can be seen playing guitar, watching "Spring Breakers," or trying to write the next great American movie.
You might also like
Bill HaderCiarán Hindsjames mcavoyjessica chastain

by Josef Rodriguez on September 14, 2014
Editor’s note: Our “Double Exposure” reviews pit two or more critics against one another on the same film to hash out their differences in opinion. Agree with what we have to say or want to offer your own take? Leave it in the comments below. The Rundown Josef Rodriguez Final Rating: 7.5 out of 10 Bottom […]

by Taylor Sinople on June 29, 2014
Editor’s note: Our “Double Exposure” reviews pit two or more critics against one another on the same film to hash out their differences in opinion. Agree with what we have to say or want to offer your own take? Leave it in the comments below. Taylor Sinople: The concept is a simple one: a rom-com spoof […]
Comments
Leave a reply
Add Comment Register

END_OF_DOCUMENT_TOKEN_TO_BE_REPLACED
Taylor Sinople Picks: The 16 Best Films of 2016
Form and Function in Alex Ross Perry’s “Queen of Earth&...
Digging for Fire and Unexpected: Husband and Wife Process Parenthoo...
Every Thing Will Be Fine 3D Review