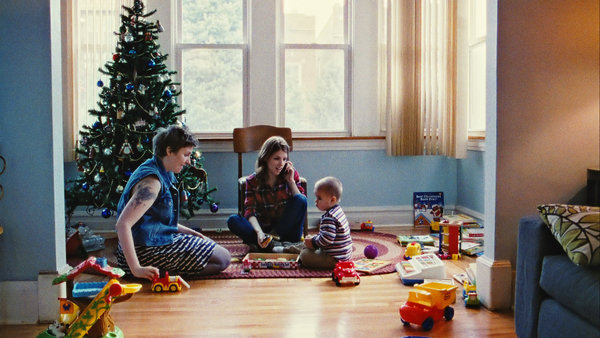 Breaking out of the video look in 2013 with his first truly distributable and widely digestible comedy “Drinking Buddies,” Swanberg had a chance to work with a few named stars for the first time and brings one of them – Anna Kendrick – into his follow-up, 2014’s “Happy Christmas”.

In the film, Jeff (Swanberg) works as a filmmaker in Chicago, Illinois while his wife Kelly (Melanie Lynskey), an aspiring author, puts her literary passions on the backburner to raise their child (played by Swanberg’s own son). Their domestic dynamic is interrupted when Jenny (Kendrick) moves in after an especially rough break-up leaves her without an apartment in the city. Jenny frees Kelly up to work on her next novel now having a full-time babysitter at home, but when Jenny uses her first night in their home to get blackout drunk at a party, Kelly begins to regret the arrangement and Jeff wonders whether his sister is really okay.

This is a project of reflection that allows for Swanberg to return to his roots with the collected knowledge of dozens of projects under his belt. A long-time Chicagoan, “Happy Christmas” – like most of Swanberg’s films – is determinedly set in Chicago’s Northside neighborhoods without ever showing the iconic skyline. It comes from living here. Many directors are desperate for their films to feel authentic to a place that they’re not, but “Happy Christmas” couldn’t be more honestly felt. Shot in Swanberg’s own home on Super 16mm film by Ben Richardson (“Beasts of the Southern Wild”), there’s a grainy look that warmly recalls the titular holiday – even though the story has little to do with Christmastime.

The film medium is a first for Swanberg, whose movies are deeply linked to the modern processes of digital, video, and Internet distribution. But the format adds a definite gruffness to the many hangout scenes that feel as if the camera coincidentally happened upon enough conversations between these characters to tell a story. A sort of fictionalized home movie.

Anna Kendrick plays against type as the antithesis of her most popular characters in films like “Up in the Air” and “50/50.” Jenny is irresponsible, immature, and a little bit lost in the world – screwing up and apologizing only to screw up again. She begins to fall for the family’s babysitter (Mark Webber), only to go back on the romance once its pushed into existence. She’s trying to get back on her feet, but more often than not can be found smoking pot in Jeff’s basement. Kendrick wages constant internal battles between the mature solution and the easy one. This is her most exposed role yet, and you can feel some shades of it are close to heart.

While Kelly has trouble trusting Jenny to babysit her child, it’s actually Jenny and her best friend Carson (Lena Dunham) that end up opening the floodgates to Kelly’s writer’s block by convincing her to delay her serious novel to entertain the idea of writing trashy erotica for fun.

These are small developments. We peak into discussions of gender roles, family, and parenthood, but there’s no true arch and little triumph. Swanberg engrosses us through his meager reach. We aren’t fed all the details; we see these people as they are right now – no backstory. It’s a simple, exquisite sampling of domestic life that was selected to show at the Sundance Film Festival (121 feature films were selected from some 4,000+ entries), and was picked up for distribution by Magnolia Pictures. “Happy Christmas” is in some ways less approachable than “Drinking Buddies,” but the endearing, niche appeal is what makes Swanberg such a luminary in the indie community.

Taylor is a Chicago-based writer and aspiring film historian. He is the editor here at TFP, and has contributed to a number of international publications such as Cinema Scandinavia, PopMatters, and Room 101 Magazine. He can also be found listening to podcasts, researching topics he has little use for, or running after a city bus.
You might also like
Anna KendrickJoe SwanbergMark WebberMelanie Lynskey

by Josef Rodriguez on August 21, 2014
“Life After Beth” is a funny, if uneven, zom-rom-com that only explores a fraction of its limitless potential, wasting a horribly misused cast in the process.
comments
Leave a reply
Add Comment Register

END_OF_DOCUMENT_TOKEN_TO_BE_REPLACED
Taylor Sinople Picks: The 16 Best Films of 2016
Form and Function in Alex Ross Perry’s “Queen of Earth&...
Digging for Fire and Unexpected: Husband and Wife Process Parenthoo...
Every Thing Will Be Fine 3D Review