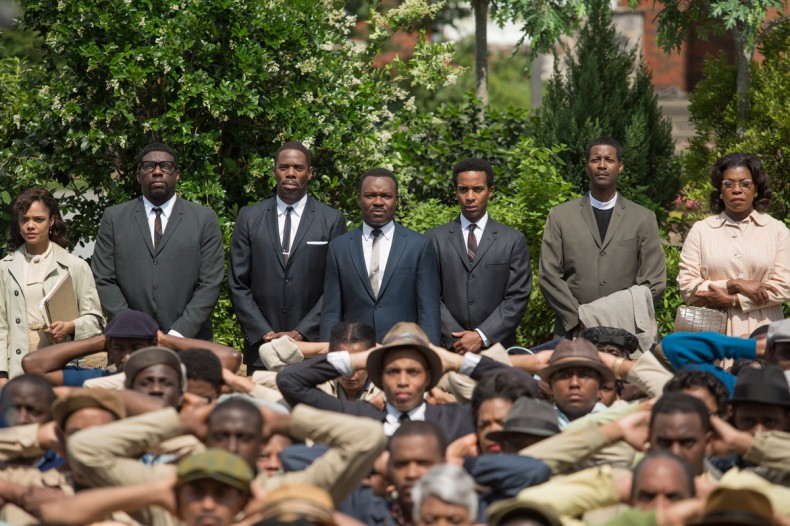 Though it falls into many tropes of the historical drama, “Selma” ends on a high note, depicting the struggle of Martin Luther King Jr. and his group of followers with honesty, humor, and skill.

In depicting the life of Martin Luther King Jr. (David Oyelowo), director Ava Duvernay has had to put on a considerably sized pair of kid gloves. Where Spielberg’s “Lincoln” dug under the skin of the 16th president, completely reappropriating the common perception of one of history’s greatest men, Duvernay is content to depict King as we all know him: kind, generous, and determined. Her film depicts his struggle to have President Johnson (Tom Wilkinson) pass the Voting Rights Act of 1965, an important piece of federal legislation that would guarantee blacks the right to vote without any prohibition, a right that was outlined specifically in the 14th and 15th amendments.

Behind him are thousands of followers – white, black, and otherwise – who march in Selma, Missouri across the Edmund Pettus Bridge, a historical landmark upon which a number of violent attacks took place against King’s protestors by the Selma police force. At this time, King was also under secret surveillance by the CIA and faces a heavy dose of guilt as a number of his followers are killed fighting for their rights.

Duvernay’s “Selma” is the rare biopic that manages to fulfill the Academy’s requirements of what a biopic should be – a performance that embodies the subject, a wealth of historical cameos, an original song that plays over the final moments, and a well-known struggle in history that can be applied to contemporary social issues – without ever succumbing to them completely.

What’s great about “Selma” is that Duvernay is, first and foremost, an artist, and there’s an artistry to “Selma” that catapults it head-and-shoulders above almost any biopic we’ve seen this year. It’s beautifully filmed and wonderfully conceived, doing away with the almost requisite flashback scenes to contextualize the viewpoints of the present. Duvernay understands that this isn’t necessary, and proceeds to focus her ambitions on just one of Dr. King’s many noble pursuits.

Viewers expecting to see Dr. King’s assassination, or a depiction of his “I Have a Dream” speech, will leave disappointed. What they’ll get instead is a snapshot of a particular set of months in Dr. King’s life, a set of months that would go on to heavily influence the few years he had left as a result of his untimely death in 1968. However, it seems that Duvernay acknowledges the expectations that arise when anyone mentions a King biopic, and she barters with her audience, removing the textbook highlights of Dr. King’s life and introducing the raw, bloody truth of the Selma marches, including one particular set piece on the Edmund Pettus Bridge that continues to give me chills whenever I think about it.

But Duvernay never begs for tears, and “Selma’s” audience will find themselves weeping with its characters as if they were in the town of Selma, fighting and struggling with King and his band of followers. Unfortunately, Duvernay never analyzes King or his followers on anything more than a surface level. Newcomer Stephan James is seen in a few scenes of the film, and his performance is heartbreaking and effective, but Duvernay never gives the character enough time to breathe, keeping the focus entirely on the events of Selma as a congregate experience, not one of the individual. Wendell Pierce, too, does excellent work here, as does Tessa Thompson, who isn’t given any opportunity to display a fraction of the charm that she did in “Dear White People.”

The film treats many of its supporting characters as expository placeholders, which is a shame considering how much Duvernay dedicated to making sure every character in the film was a real person, not an amalgamation of themes and necessity. And it’s not that “Selma” couldn’t have made time for some breathing room. Cutting the scenes involving Dylan Baker as J. Edgar Hoover and tacking on another 25 minutes of ensemble development might have helped “Selma” greatly. As of now, it’s an admirable, intermittently beautiful, and insightful biopic about King’s time in Selma, Missouri. But it wants to be more than that, and its two-dimensional exploration of its subjects never quite justifies its ambitions.

As for King himself, Oyelowo’s performance almost cannot be described. It is a complete and utter transformation worthy of Daniel-Day Lewis’ Lincoln, and one that will surely be awarded accordingly. He is absolutely the glue that holds this film together, and he performs with great dignity and a deep understanding of the man and the myth that was Dr. King. He is absolutely captivating in every single frame, and his dedication to the film and to portraying Dr. King accurately is more than a noble pursuit, it becomes a civic duty. Mr. Oyelowo, say hello to your Oscar.

Josef Rodriguez is a writer, filmmaker, and musician living in New York City. He is often labeled as "that guy who didn't love Boyhood" and he finds himself liking Harmony Korine films more than he likes his own friends. When he's not stressing over turning in reviews on time, Josef can be seen playing guitar, watching "Spring Breakers," or trying to write the next great American movie.
You might also like
CommonSelmaTessa ThompsonTom Wilkinson

by Josef Rodriguez on March 15, 2015
"Run All Night" is a somewhat disappointing collaboration between Liam Neeson and Jaume Collet-Serra, who fail to recreate the compelling thrillers of their previous effort, "Non-Stop."
comments
Leave a reply
Add Comment Register

END_OF_DOCUMENT_TOKEN_TO_BE_REPLACED
Taylor Sinople Picks: The 16 Best Films of 2016
Form and Function in Alex Ross Perry’s “Queen of Earth&...
Digging for Fire and Unexpected: Husband and Wife Process Parenthoo...
Every Thing Will Be Fine 3D Review