Reviews
1
0
previous article
Review: Listen Up Philip
next article
A Fresh Look At: The Nightmare Before Christmas (1993) 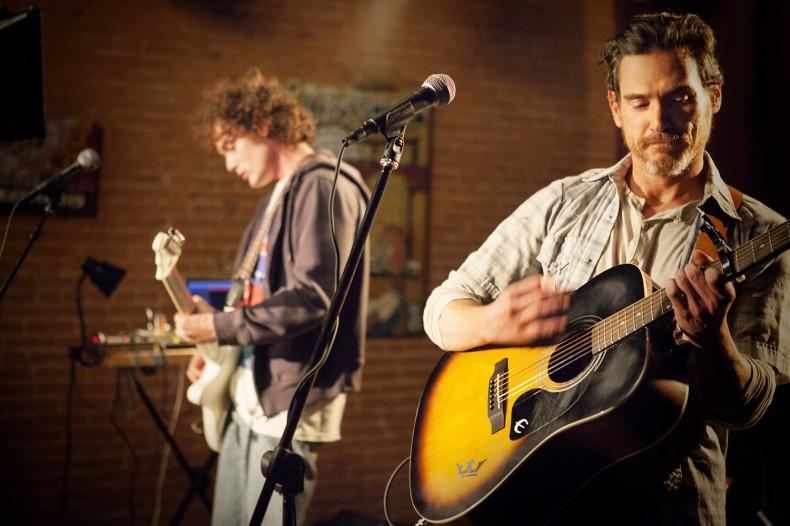 Despite its heavy material, “Rudderless” is an enjoyable and surprisingly fun movie that sometimes veers into manipulative territory, regardless of how watchable it may be.

The most ambitious aspect of “Rudderless,” the directorial debut of William H. Macy (who’s most well-known for his starring role on Showtime’s “Shameless”), is that Billy Crudup is in a band. Macy’s film admirably casts Crudup as Sam, the father of a college student (Miles Heizer) who is killed by a gunman during a campus shooting. Plagued with the loss of his only child, Sam retreats into a life of minimal responsibility, living on a boat two years after the incident with a job painting houses and nights that usually end with him passed out drunk on the floor.

The only thing keeping his son’s memory alive is a box of songs he recorded while in school. Sam, who isn’t exactly tone-deaf himself, begins learning and playing these songs as a way of coping, and soon signs up for a local open mic, passing off his son’s music as his own. The songs, which are quite good, catch the attention of some local musicians, including the supremely talented Quentin (Anton Yelchin), who convince Sam to start a band with them. And so, Rudderless is born, headlining every Saturday night at the local performance space. However, Sam faces pressure from his bandmates, who are ready to take their show on the road, and must decide whether or not to reveal the real source of the music they play every night.

For his feature debut, director William H. Macy has tackled a very delicate script, one that requires care and sensitivity from its helmer. Macy reportedly spent a year working on it after he acquired the rights, and the result is a somewhat strong, if uneven, debut, one that benefits from an actor behind the camera who has worked with many Hollywood greats. Their influence is almost obviously noticeable, and it’s that influence that becomes both the savior and fatal flaw of Macy’s film.

“Rudderless’” most valuable asset is its star, Billy Crudup, who gives his best performance since 2009’s “Watchmen” as a grief-stricken father searching for a way to accept the sudden death of his son. Crudup doesn’t allow things to get too sentimental even when the film does, and his performance grounds the film when Macy’s direction becomes uneven, as it is wont to do. Anton Yelchin also turns in a fantastic supporting performance as a young musician with issues of his own, and it’s wonderful to see him returning to the independent roots that garnered him that initial wave of notoriety when he first came on the scene with films like “Alpha Dog” and “Charlie Bartlett.”

The chemistry between the two actors, both musically and on-screen, helps guide the film into territory that could be labeled, despite the inherently heavy material, as “fun” or “entertaining.” Consequentially, Macy’s greatest contribution to his film is, as one could guess, his work with the actors. Although the film has almost no distinctive visual style – and a narrative that weaves and bobs itself out of corners, dead spots, and plot holes – “Rudderless” is able to stay afloat thanks to the work of its uniformly excellent cast, and a surprisingly catchy soundtrack by Simon Steadman, Charlton Pettus, and Ben Limpic.

However, beyond that, “Rudderless” doesn’t have much to offer beyond a perfectly solid, filmable story with some good tunes to move things along. There’s nothing particularly artful or significant about Macy’s film and, at best, it’s an agreeable, middle-of-the-road piece of filmmaking that will hopefully lead to better things down the road. “Rudderless” isn’t a bad movie by any means, but it’s also not especially insightful, distinct, or original. It’s nice to see Billy Crudup doing some good work again, and movies about music that actually have good music in them are always welcome, but it’s a shame that Macy’s directorial sensibilities are so geared toward keeping his well-oiled machine of a story going for as long as it can while virtually ignoring the opportunities for nuance and subtlety. It’s more than watchable, and works as a decent enough crowd pleaser, but it doesn’t have much of a personality and, as a result, not much of an impact.

Josef Rodriguez is a writer, filmmaker, and musician living in New York City. He is often labeled as "that guy who didn't love Boyhood" and he finds himself liking Harmony Korine films more than he likes his own friends. When he's not stressing over turning in reviews on time, Josef can be seen playing guitar, watching "Spring Breakers," or trying to write the next great American movie.
You might also like
Anton YelchinLaurence FishburneWilliam H. Macy

END_OF_DOCUMENT_TOKEN_TO_BE_REPLACED
Taylor Sinople Picks: The 16 Best Films of 2016
Form and Function in Alex Ross Perry’s “Queen of Earth&...
Digging for Fire and Unexpected: Husband and Wife Process Parenthoo...
Every Thing Will Be Fine 3D Review