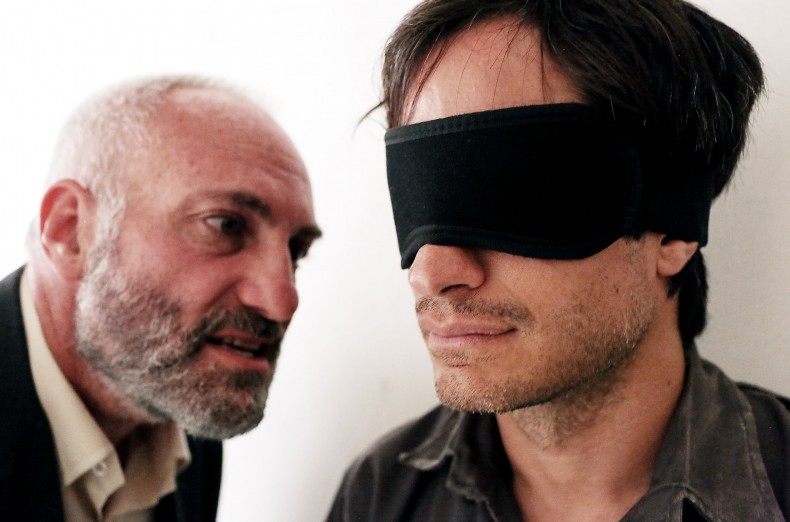 While Jon Stewart's directorial debut is filled with a message of hope and understanding, its many pitfalls and genre shifts confuse and blur the message. Solid performances by Bernal, Leonidas, and Bodnia cannot withstand the weight of Stewart's film, as they are 30-minute characters written into a 103-minute film.

Known primarily for his late night comedy news program, “The Daily Show,” Jon Stewart has been blurring the lines between satire and social commentary for a over a decade. Making the transition from television to his directorial debut, “Rosewater,” Stewart does not so much blur lines, as he does completely neglect genre and tonal boundaries. In what is a mix between a gripping biography, and an inspiring human drama, Stewart cannot seem to focus himself for more than 30 minutes at a time.

“Rosewater” opens with a brief explanation of the film’s title, set to some nicely shot footage of the process behind making and “distilling” the holy anointment. We become familiar with the narrator’s voice, Maziar Bahari (Gael García Bernal), who is about to be arrested by Iranian authorities for being a spy. As a journalist for Newsweek magazine, Bahari has returned to his childhood home in Iran to cover the newest presidential election. Upon introduction to a subversive cab driver (Dimitri Leonidas), Bahari becomes embroiled in one of the most hotly-debated elections in Iranian history. Capturing some damning footage of the Iranian government using deadly force against its own, protesting, people, Bahari is branded a foreign spy, controlled by the west, and is held in solitary confinement until he is willing to admit to these “facts.”

While Stewart’s film is certainly compelling, it lacks any real punch. The film is shot in flashback, wherein Bahari recounts why he is in prison, and why he is in Iran to begin with. A garbled mix of needless exposition and some thought-provoking assertions, this “flashback” is largely unbroken and lasts for most of the first and second acts. The audience becomes acquainted with the “rational” side of Iran as Bahari interviews groups of men trying to break free of the tyranny of a religion-based political system. “Rosewater” then drastically shifts gears when Bahari is arrested. Solitary confinement and daily sessions with a “specialist” (Kim Bodnia) are pieced together with quick editing, and only linger to evoke an emotional response. While this is the most glaring shift in the film, Stewart constantly moves in and out of form, shooting some of his footage in a handheld low-quality camera, and using a CGI-enhanced mounted camera to shoot much of the rest. Apparently finding it impossible to remain abstinent from comedy (or his beloved “Daily Show”), Stewart forces moments of hilarity in the interrogation (don’t get me wrong, I enjoy a good hand job joke as much as anyone, but focusing on “sensual massage” as a running joke becomes quickly tedious).

Bernal is the saving grace of the film, as his portrayal of the downtrodden and nervous Bahari is quite convincing. Able to handle an Iranian accent, and convincingly (for my culturally-deficient ears) transition from Spanish (his native tongue) to Farsi, Bernal confidently encapsulates his character. A bizarre chemistry is shared between Bernal and his captor, played by Kim Bodnia, as the two men become intimately acquainted with one another. In another solid performance, Bodnia incites hatred in his audience for his ignorance and blind devotion to Supreme Leader Khamenei. Yet somehow, Bodnia remains somewhat likable as we see him torn between subservience and his connection to Bernal’s Bahari.

Stewart looks to be much more at home with his documentary style than with the conventions of traditional filmmaking. His shots from the handheld camera and from the “point-of-view” of Bahari have an endearing and real quality that enhance the mood of the scenes. His portrayals of discovering the “satellite university,” and becoming involved with the citizens have a genuine quality that fails to permeate the rest of the work. Much more proficient with depicting real-world events, the more-dramatized factions of Stewart’s film fall short, and leave much to be desired. His comedy can be heavy-handed at times, but is made even more laborious when he mixes it with is already-tiresome “triumph of the human spirit” narrative tangent. Stewart does portray the spread of information (via television, the internet, and cellphones) rather interestingly, bringing some fresh ideas to the increasingly-stagnant visualizations of technology in film and television.

“Rosewater” is a competent, well though out piece of filmmaking, but it falls well short of its lofty goals. It shines when Stewart is able to rely on his years of experience in journalism, but ultimately fails under his forced dramatic turns and his interpretations of the more intangible side of human emotion and sacrifice.

Jordan Brooks is a contributor to several online publications, including his own blog focusing on streaming film. Being an avid lover of film, he has recently begun diving more deeply into film history; and is working towards becoming more educated in world cinema. He currently resides in sunny California with his girlfriend and their dog (although the real film buff in the family is definitely the dog).
comments
Leave a reply
Add Comment Register

END_OF_DOCUMENT_TOKEN_TO_BE_REPLACED
Taylor Sinople Picks: The 16 Best Films of 2016
Form and Function in Alex Ross Perry’s “Queen of Earth&...
Digging for Fire and Unexpected: Husband and Wife Process Parenthoo...
Every Thing Will Be Fine 3D Review