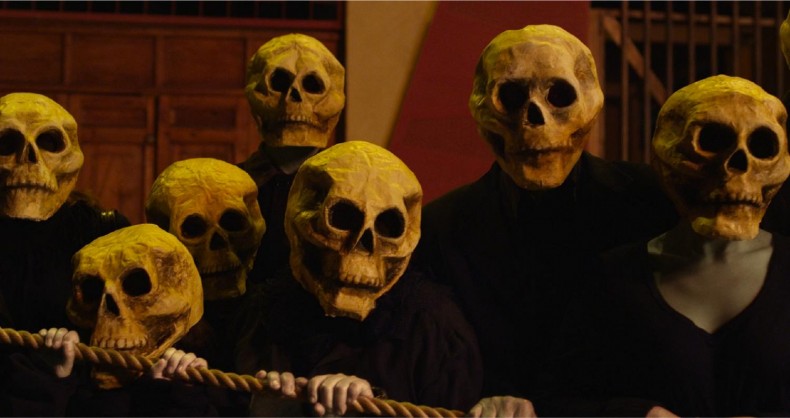 Alejandro Jodorowsky makes a triumphant return to cinema with "The Dance of Reality:" a therapeutic and invigorating semi-biographical work of surrealism that seeks to explore the subjectivity of reality and truth.

A scene early in “The Dance of Reality” finds a very young Alejandro Jodorowsky dragged to the barbershop by his austere father. Alejandro is to have his flowing, blonde locks removed. His mother sees his hair as the only connection she has to her own father, who died when she was young. This affects her so greatly, she has taken to calling him her “father,” instead of her son. The barber begins by cutting the hair before pulling Alejandro’s blonde hair back, painfully, to reveal it is nothing more than a wig – a thick mat of black hair underneath. Alejandro has shed ties to his grandfather’s memory and become his own man.

This is one surreal moment emblematic of the approach Jodorowsky, the 85-year-old filmmaker, takes to depicting reality in his autobiographical magnum opus. The moment could not have happened, but it did. Is there a difference between the literal and figurative truth if it comes from the person that experienced it?

Jodorowsky became well known when his 1970 psychedelic western “El Topo” helped kick off the midnight movie phenomenon. He’s since become a cult icon, and was very recently brought back into cinemas as the subject of “Jodorowsky’s Dune,” a documentary that chronicles the could-have-been when he began developing an impossibly large, 10-hour adaptation of Frank Herbert’s sci-fi novel featuring collaborators such as Pink Floyd, H.R. Giger, and Salvador Dali. That bold vision and unrelenting ambition is finally realized in “The Dance of Reality” – a film more visually inventive and purely surreal than any we’re likely to see again this year or next. It’s a coming of age sort-of-fantasy that owes as much to Fellini’s “Amarcord” as “The Great Beauty” did to “La Dolce Vita,” but all four films magnificently reach equal footing in terms of quality and sheer audacity.

We open on Jodorowsky himself, providing a short articulation of one of the film’s primary themes – the connection between wealth and death. From there, we meet the filmmaker again in his youth. Jeremías Herskovits plays the young Alejandro who is being raised by his Stalin-obsessed communist father (Brontis Jodorowsky) and his gentle mother (Pamela Flores) who doesn’t speak, but sings her lines in an operatic soprano.

“The Dance of Reality” is a tremendously dense, life-affirming piece that passes on a sliver of the sensation of wisdom one hopes to find when able to reflect on a lifetime of experiences. He achieves it through the conflicting elements of visual fantasy and stripped-bare candor. Jodorowsky casts his real-life son, Brontis, to play his father. This is the level of reflective intensity. What’s more, Jodorowsky himself appears in the film at will, interrupting the narrative to provide comfort and insight to his younger self. This is a filmmaker working through crucial, late-life issues on screen in front of us. He makes movies “not to make money, but to lose money.” Revealing his soul is the fundamental goal and only gauge of success. To emphasize this, he delivers his introduction to the film completely naked.

Anyone that’s followed Jodorowsky knows about his eccentricities and belief in psychomagic. He pushes hard here on concepts such as god, the infinite nature of the human soul, and fate. As Alejandro navigates the path to adulthood in Tocopilla, Chile, his father leaves to assassinate a dictator, Carlos Ibanez (Bastián Bodenhöfer). The second half of the film is about his father’s journey as his pugnacious spirit becomes wilted and he begins to uncover a sense of spirituality he has long denied himself. The hippie pontifications are grounded with affecting, even unforgettable images and narration that offer indisputable philosophical wisdom. He alleges that life is nothing more than the alternation of periods of suffering and relief. He gains our trust with genuinely powerful observations and then pushes the film into surreal territory that we continue to read as a subjective (but genuine) version of reality. A character speaks to a charred corpse and the corpse speaks back. We don’t bat an eye.

Wherever the money came from to make something so completely lyrical and ruminative, it was worth every penny. Jodorowsky has clearly spent every day of his 23-year hiatus preparing to produce these 130 minutes of cinema.  One viewing is not nearly enough. Not every scene will connect for every viewer (good luck explaining the rationale for a few of these moments), but there’s a permeating sense of undeniable heart that allows for captivation. If the passing of one’s experiences on to the next generation is the responsibility of the senior and the reward of the junior, then “The Dance of Reality” is no doubt Jodorowsky’s ultimate achievement as an artist and thinker.

Taylor is a Chicago-based writer and aspiring film historian. He is the editor here at TFP, and has contributed to a number of international publications such as Cinema Scandinavia, PopMatters, and Room 101 Magazine. He can also be found listening to podcasts, researching topics he has little use for, or running after a city bus.
You might also like
Alejandro Jodorowsky

by The Focus Pull Staff on January 1, 2015
2014 was a huge year for cinema. With releases from heavy hitting veterans such as Richard Linklater, Paul Thomas Anderson, and Jim Jarmusch, it can be hard to find the time to seek out work from talented new directors. That’s where this list comes in. As a starting point for some of the very best films […]
Comments
Leave a reply
Add Comment Register

END_OF_DOCUMENT_TOKEN_TO_BE_REPLACED
Taylor Sinople Picks: The 16 Best Films of 2016
Form and Function in Alex Ross Perry’s “Queen of Earth&...
Digging for Fire and Unexpected: Husband and Wife Process Parenthoo...
Every Thing Will Be Fine 3D Review