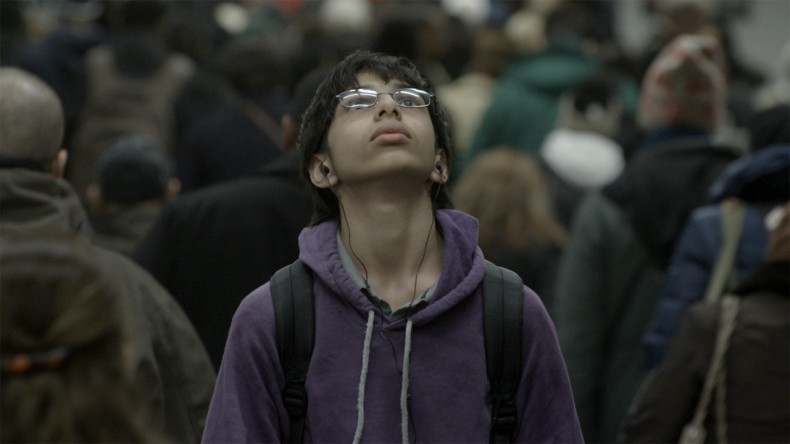 New York is an artist’s canvas, and instead of painting a beautiful portrait or composing a glorious symphony on its streets, Sam Fleischner has decided to merely paint a heart on it with the intention of lecturing his audience for the next hour, or for however long he can hold their attention with "Stand Clear of the Closing Doors."

The New York subway is the great, unnoticed beauty of the city. Nothing compares to staring out the window at the quickly passing lights, the interminable construction throughout each station, and the sight of passengers riding by on a parallel line. Sam Fleischner’s sophomore effort, which takes place during the week preceding Hurricane Sandy, dares average New Yorkers to see their lives from a new perspective, one they have definitely never encountered before.

In the case of “Stand Clear of the Closing Doors,” it’s the perspective of Ricky (Jesus Sanchez-Velez), a high school student, and lover of dragons, who suffers from autism. He lives in Rockaway, a lower-middle-class neighborhood in Queens located directly next to the beach, with his mother Mariana (Andrea Suarez Paz), a housekeeper, and his sister Carla (Azul Zorrilla), who is required to walk Ricky to and from school everyday. Meanwhile, their father (Tenoch Huerta) is upstate doing an 8-week construction job that he won’t get paid for until the work is done. When Carla fails to adhere to her obligations of walking her brother home, and a call from Ricky’s school regarding his absence leaves his mother extremely upset, Ricky takes to the subway in an attempt to flee the impending punishment that awaits him when he gets home. Travelling through all of Manhattan’s West Side, Ricky is given a chance to see what the world is really like for the first time in his life. Hesitant to call the police due to her family’s illegal status in the US, Ricky’s mother is forced to look for Ricky on her own, with the help of a local shoe store clerk (Marsha Stephanie Blake), who works at Ricky’s favorite store. But as the storm nears and the subways begin to close, their chances of finding him quickly dwindle.

I’ve always been partial to films shot on-location in New York. Having lived here for most of my life, it’s always refreshing to see a young filmmaker’s perspective on one of the world’s most revered urban landscapes. In “Stand Clear,” viewers are given a unique viewpoint in that the film’s protagonist is, like many people watching the film, bearing witness to the overwhelming breadth of the city for the first time, despite it being mostly from the window of a subway car. Ricky’s attitude towards what he sees is what makes the film so enjoyable to watch at first, as there’s really nothing cinematic to compare it to. Some viewers, like myself, may see a common thread between this film and Mark Haddon’s novel, “The Curious Incident of the Dog in the Night-Time,” but the heavy reliance on visual cues in Fleischner’s film help it establish an identity of its own.

It’s a shame, though, that “Stand Clear” can never live up to the framework that’s laid in the film’s first thirty minutes, which promises a surreal, ethereal, and wholly original take on a city that is as venerated as New York. But after its tremendous first act, “Stand Clear” falls into tropes that we’ve seen in countless other indie productions, and writes itself into corners that it ungracefully wriggles out of in the most contrived ways. Ricky’s store clerk friend is a completely unnecessary character, and adds absolutely nothing to the film. The initial concern about not wanting to call the police is forgotten when Mariana finally does so, only to be let down when they, too, find nothing. Her status as a citizen is never referred to once throughout the entire investigation, and it’s as if there was never an issue in the first place. In fact, the only time the family’s legal status comes up as an issue is in reference to Ricky’s principal, who tells Mariana that she should apply for Federal Aid to help Ricky find the right school which, as anyone with a social security number knows, she cannot do. Additionally, the fact that Ricky, who becomes dirty and visibly malnourished by the end of the film, is not stopped once by a police officer is absolutely ludicrous, and keeping him confined to the walls of a subway throughout the entire film is a major disservice to both the audience and the character, who deserve to see the light of day.

Fleischner, along with writers Rose Lichter-Mark and Micah Bloomberg, never define the severity of Ricky’s autism, making it easier for them to keep him in the subway without necessarily having to explain why he chooses to do so. However, the consistency of his illness doesn’t carry from scene to scene, and the film is guilty of forcing the character into situations that wouldn’t necessarily make sense considering the nature of the scene that precedes it. I can understand not wanting to shoot in the streets for budgetary reasons, but it seems to me that “Stand Clear” misses a great opportunity to truly capture the spirit of New York through this boy’s eyes by keeping him on one train that rides back and forth for the entire film. At a certain point, seeing Ricky in the same stations day after day stops being interesting, and involving a subplot where Ricky boards the wrong train or accidentally exits the station would have heightened both the tension and the intrigue in a compelling way.

More than that, what keeps “Stand Clear” from greatness is that it’s just not all that interesting to watch. Although it does feature breathtaking cinematography by Adam Jandrup and Ethan Palmer, including a certain subway scene that utilizes the train’s headlights and some very simple but effective voice over by Ricky to craft one of the most beautiful things I’ve ever seen, “Stand Clear” holds itself back artistically and narratively by using its running time as a platform to make statements about immigration reform when it should be more concerned with telling a great story and building on the mood that is set in the first act.

The political themes are so obvious and heavy-handed that it slowly drains the life out of the film as it drags its feet to a conclusion that, based on the individual viewer’s perspective, could either be viewed as a young soul returning home, or an offensive cop-out that is less emotionally affecting and more morally insensitive in the wake of the tragedy concerning Avonte Oquendo. Letting these themes take precedence over the film’s artistry was a massive mistake on the director’s part, and it results in a clash of visual elegance and political consciousness that never find a harmony. By the end of the first hour, the film’s repetitious nature begins to outwear its welcome, and when the credits finally roll after a seemingly merciful 102 minutes, it truly feels like three hours have passed. New York is an artist’s canvas, and instead of painting a beautiful portrait or composing a glorious symphony on its streets, Fleischner has decided to merely paint a heart on it with the intention of lecturing his audience for the next hour, or for however long he can hold their attention.

(All Reviews), Drama, Issue #06, Reviews
About the Author
Josef Rodriguez