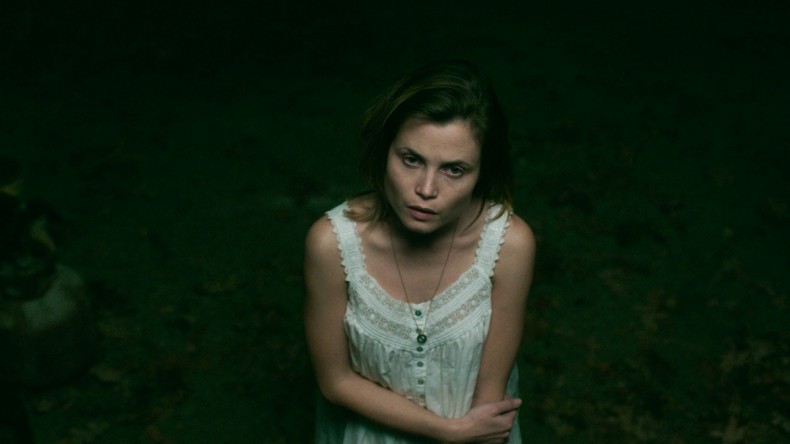 Mona Fastvold’s debut feature comes equipped with gorgeous cinematography and one of the year’s best scores, but its haunting moodiness isn’t enough to cover up the subpar script by Fastvold and co-star Brady Corbet.

A renovation, a secretive past, a garage, and a pregnancy. These are the elements of Mona Fastvold’s debut feature, “The Sleepwalker,” a beautifully filmed and scored story of two sisters and the men in their lives. Kaia (Gitte Witt) and her boyfriend Andrew (Christopher Abbott) are in the process of renovating Kaia’s childhood home, which was nearly burned down in a fire caused by her emotionally unstable sister, Christine (Stephanie Ellis).

On the night of Kaia’s birthday, Christine calls and announces that she’s at the nearby train station waiting to be picked up. Kaia, obviously can’t say no, and back at the house Christine reveals that she’s 14 weeks pregnant. Her fiance, Ira (Brady Corbet), comes to pick her up the next morning, and the couple ends up bunking with Andrew and Kaia for the next few nights. But as Christine’s behavior becomes more and more bizarre – including sleepwalking episodes that constantly lead her to the lake near the house – the truth about Kaia and Christine’s past comes to light.

Mona Fastvold’s “The Sleepwalker” is one of the year’s most unique audio-visual experiences, combining hellishly gorgeous cinematography from Zack Galler with a haunting score by Sondre Lerche and Kato Adland that gives the film a stylistic edge that’s, quickly and abruptly, undone by the film’s disappointing screenplay by Fastvold and Corbet, who also stars in the film.

Selling itself as a psychological thriller, “The Sleepwalker” is more akin to a slight, vaguely drawn domestic drama with the tensity and aesthetic of a horror film. Perhaps the film’s strongest aspect is the constant anticipation of a legitimate jump scare or horrifying revelation without any catharsis. Fastvold successfully occupies the headspace of her characters with dim lighting and an eerie sensibility that functions less as a genre trope and more as a well-conceived tactic to embody the themes presented throughout – including those of a  secretive past and the power of implied or repressed memory.

Christopher Abbott gives a standout performance as Andrew, a young man who is already forced to atone for the sins of his past. Doing a complete 180 from his role as Charlie in HBO’s “Girls,” Abbott most successfully underplays as Fastvold intended, with an apparent but not-quite-obvious and irredeemable pain underneath the surface. Corbet has also written himself a phenomenal character as Ira, and his performance is equal parts suspicious and sincere, and he often leaves the viewer wondering if his situation with Christine is one of circumstance or actual love.

To his credit, he doesn’t saddle Ira with the film’s best lines or moments, letting the other actors outshine him on a surface level in almost every respect. However, it’s Ira’s progressing subtleties that ultimately make him the strongest character in the film. While Abbott is brilliant from the outset without much development past the second act, Corbet’s Ira is a character that is constantly developing and constantly surprising the viewer by never doing exactly what we expect him to do.

The two female leads are also both very strong, if not as well performed, as their male counterparts. When all is said and done, “The Sleepwalker” is about Kaia and Christine, so it becomes an issue that the two male characters are ultimately the most memorable characters. The issue isn’t one of male perception or male gaze, but rather one of casting, and neither Gitte Witt nor Stephanie Ellis are up to the challenges presented by the screenplay, especially in the final third.

Ultimately, the issue with “The Sleepwalker” is its dialogue, which rarely feels natural or off-the-cuff, which is exactly what a movie like this needed. Instead, every single conversation is so on-the-nose to the point of being obnoxious, as if, through the vagueness that carries the story, Corbet and Fastvold still don’t have enough faith in their audience to allow the film to have a more improvisational tone.

It also doesn’t help that, after a certain point, every minute begins to feel like ten and scenes that should be intriguing and exciting often come off as dull and uninteresting while scenes that are meant to be observatory and transitional are, more than not, the best moments in the film. Fastvold’s film occasionally hints at a film that is better and more accomplished than the one she made, but “The Sleepwalker” is not nearly the sum of its parts, which may be why it feels worse than it actually is: it should have been great.

NR (equivalent to R for some graphic sexuality, language, and brief violence)