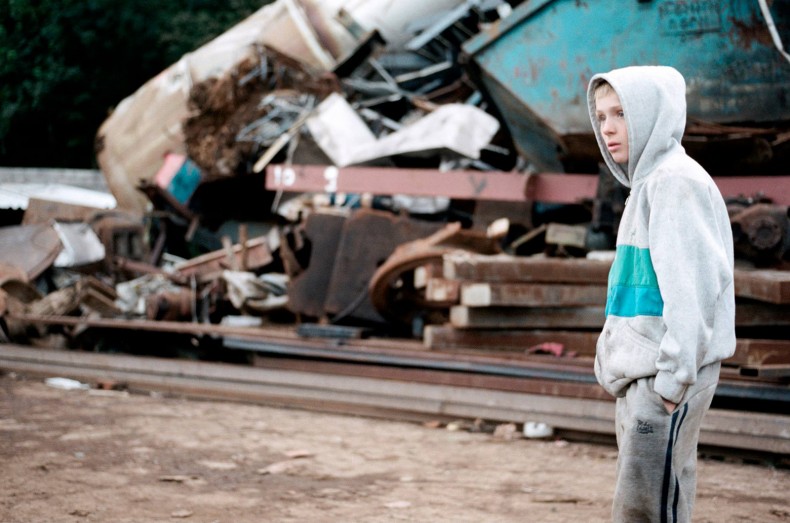 Passing through Yorkshire, you may come upon two schoolboys on a horse towing a flatbed full of scrap metal. You’ll probably wonder what they want with a cart of junk, and why they aren’t in school. Meet best friends Arbor (Conner Chapman) and Swifty (Shaun Thomas): two thirteen-year-old boys caught in the middle of economic depression in contemporary England. Swifty, gentle and pudgy, watches his father sell their living room couch to pay the electric bill and feels the hopelessness that’s driving his only friend, Arbor, to unpredictably lash out at school and home.

Together, Swifty and Arbor (a manic, frequently delinquent product of his single-mother’s negligent parenting) have little than each other in the world. They stumble upon a group of men stealing copper cables from a railroad, and end up at a scrapyard where Arbor takes one glance at the cash (some £3,000) being handed over in exchange for a truckload of illegally acquired copper plates and wires and decides he is to be a “scrap man” himself. After meeting the dingy owner of the scrapyard, Kitten (Sean Gilder), a man that could take the kids under his wing if he wasn’t such a scumbag – the boys ditch school to spend their days scavenging copper in increasing acts of desperation that spiral towards tragedy.

“The Selfish Giant” uses first-time actors for its young leads in writer-director Clio Barnard’s top-rate sociopolitical film that carries spiritual ties to the original Oscar Wilde story of the same name. Arbor, sporting the shadow of a mohawk, makes up for his puny stature with a volatile attitude – kicking and screaming when not held back by the much more reserved Swifty. Both actors were commended at the BFI London Film Festival for bringing raw characterizations to the screen without any notable experience in the craft. They bring to life the friendship that powers the film’s core. Outcasts that are more often together than alone, they fight and tease each other, but also show love (a kind without sentimentality). Actor Chapman carries us through Arbor’s wild emotions with sobering realism all the way until the emotional climax at which point his most explosive moment happens off-screen. Barnard avoids Chapman’s face in this intense sequence, and we’re briefly disconnected from the performance when we need it most.

Mike Eley, an experienced cinematographer who dabbles in documentary, lends the film a cold, desaturated tone that becomes a lingering aura for days. Eley uses no single tactic to tell the story, but implements varying styles based on the emotional context of the scene. For example, one tragic moment (unexpected to the characters) happens in a hands-off static wide shot, while other sequences in which Arbor is actively moving around is captured in bouncy, hand-held tracking shots. Silent photography of the surrounding countryside and the power lines running through them serve as lyrical commas to the well-written visual story. It amounts to just enough interaction between camera and subject to make for a bleak, relatable connection similar to Destin Cretton’s “Short Term 12.”

Barnard achieves something heartbreaking by placing us in the mind of the bullied and lost. Arbor and Swifty just can’t manage to stay ahead – of debt, of problems at school, of family dysfunction. “The Selfish Giant” doesn’t sink into melancholy but instead is alive with the sounds of misery – Arbor’s fists banging on his bed-boards in fury, the crunching atmosphere of the scrapyard, and the click-clacking of the horses used to transport the scrap metal. It’s a cacophonous, haunting rendering of struggle and misfortune in contemporary Britain. We can’t help but feel we’re watching only the prologue of a much longer struggle for Arbor and Swifty in adulthood – the sadness of which dwells on us long after the prolonged blackness that ends the film.

END_OF_DOCUMENT_TOKEN_TO_BE_REPLACED
Taylor Sinople Picks: The 16 Best Films of 2016
Form and Function in Alex Ross Perry’s “Queen of Earth&...
Digging for Fire and Unexpected: Husband and Wife Process Parenthoo...
Every Thing Will Be Fine 3D Review