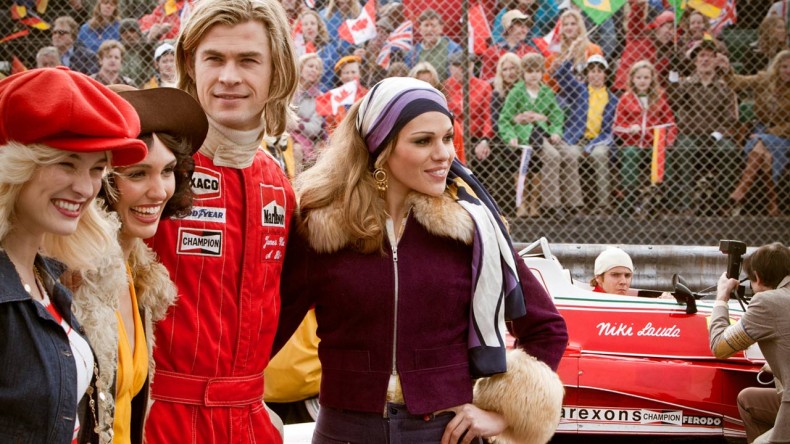 Ron Howard’s “Rush” isn’t the most dramatically powerful biopic of the year, but nonetheless thrills with a pair of perfect-pitch performances and well-produced racing sequences.

Formula One World Champion Niki Lauda observes in the opening of “Rush”: “Twenty-five people start Formula One, and each year two die. What kind of person does a job like this?” The answer is what seasoned biopic director Ron Howard (“Apollo 13”, “Frost/Nixon”) spends two hours searching for.

Lauda (Daniel Brühl), a strict, calculated German Formula One driver, is no doubt most famous for his long-time feud with rival James Hunt (Chris Hemsworth) – a wild, handsome British racer and party-prone fan favorite. The rivalry began innocently in 1970 at a Formula Three race but fiercely developed over the following decade as the drivers advanced in their careers to Formula One – the most prestigious (and fastest) single-seater racing competition in the world. Their competitive exploits take a tragic turn in 1976 when Lauda loses control of his vehicle at the German Grand Prix and is nearly killed when unable to escape his burning vehicle. While in the hospital, Lauda witnesses Hunt winning race after race and is aggressively driven to recover and attempt to defeat Hunt before he becomes World Champion.

Howard’s extensive experience working with true stories shows in the wonderful direction of this half-racing, half-drama film that delivers on entertaining fans of both genres. The short-ish 120-minute runtime never falls into the recent biopic trap that has sprawling, slow-paced dramas spanning 3 hours. This isn’t Oscar season bait from a forlorn Howard searching to relive “A Beautiful Mind”. “Rush” isn’t Best Picture good, but it’s a lot of fun and an impressive mesh of skilled performances and raw entertainment.

Chris Hemsworth (“Thor”) is used wisely to embody the celebrity of professional drivers in the golden age of 1970’s Formula One racing. Hemsworth is built for this kind of stately, hunky role and plays his part to the tee in the first half of the film until Lauda’s severe accident requires more dramatic substance of him. At that point, Hemsworth proves to be up to the additional layer of emotional depth. Hunt serves as a reactionary force to Lauda’s near-death experience – a wake-up call to the risks that Hunt takes every time he sits down in his supercar.

Daniel Brühl’s (“Inglorious Basterds”) arrogant and impersonal Niki Lauda is the most deeply seated performance in the film. Lauda is a man cursed with an obsession with calculation – from the chance of dying in a race, to the likelihood of happiness with a woman he proposes to (Alexandra Maria Lara). This questioning of risk is tested on the fateful day of his debilitating accident when rainy conditions lead Lauda to gather the drivers together and vote to cancel the race. When Hunt persuades the group that Lauda is only looking to cancel so that he may hold his lead in the standings, Brühl experiences utter frustration and anger that seems to stem not from the actor but the character himself. The performance has a powerful effect on the threat of danger. The inevitable crash sequence is the centerpiece of the film; it’s easy to go into the theater anticipating this big scene. When it finally comes, you realize you don’t want to see Lauda go through it. All the worse, then, that the crash (which conveys how long a minute really lasts when engulfed in flames) and ensuing healing process is nothing short of gruesome.

“Rush” succeeds in its racing sequences by allowing a legitimate sense of danger to enter the high-intensity scenes. This is especially important for viewers that aren’t racing fans. Fortunately, these aren’t strictly racing scenes as much as they are broad, entertaining action set pieces. Cinematographer Anthony Dod Mantle (“Dogville”, “Slumdog Millionaire”) uses intense, fast-paced coverage of the races to convey the violent experience of strapping one’s self into a jet with wheels. The style is more documentative than cinematic (likely influenced by his work with Danny Boyle). Cameras are rigged to the cars and the raw power of the 500 horsepower engines shake the frame. Fascinating macro shots are mixed in that show various parts of the engine or braking system at work. Outside of the races, Mantle adapts to whatever situation the story calls for – capturing equally impressive images in dramatic moments that range from quiet conversations to a sequence in which the camera loses its objectivity to enter a drunken stupor with a character.

Sonically, sound designer Danny Hambrook does one hell of a job at finding the right tone for the races. Every tire squeal, engine roar, and gearshift is crisply amplified to seat-shaking levels. The soundtrack is split between classic rock hits and a characteristically full-bodied score composed by Hans Zimmer.

Above all, “Rush” is a glorious return to form for director Ron Howard who veered off a great streak of award-winning films to produce the dense “Angels & Demons” and senseless comedy “The Dilemma.” With “Rush,” a real sense of care for the subject is felt throughout every decision Howard makes. Every time we return to a race sequence, it is with an altered perspective gained from watching Hunt and Lauda live out their lives off the track. Each race means something different to their rivalry and careers so they’re always interesting to watch. Howard understands that gratuitous action would lessen the biographical integrity of the film, and thus parcels out the races at a brilliant pace. Early on, action scenes are used sparingly and mostly in montage – it isn’t until late in the film that we actually watch the highly crucial races unfold in longer form, by which point we’re most invested in their outcome.

The rivalry between the two leads will have you flipping sides more than once, as they are both good and reprehensible people in different ways. Hunt is the easily likeable one straight off the bat thanks to his winning smile and carefree attitude, but his private personality is proven to be less desirable evidenced by his relationship with his wife Suzy Miller (Olivia Wilde in an underutilized role) – a woman well-known for breaking up Elizabeth Taylor and Richard Burton. Hunt and Lauda offer two fascinating opposing views of racing and of life. Their dichotomy is so strong; it feels as if there were some stories left unexplored between them in the swiftly paced film. Perhaps with only a scene or two more time with them, “Rush” could be more than great entertainment.

As it is, “Rush” earns perhaps the best compliment to be paid to a sports-drama – it will generate an emotional investment from the viewer regardless of whether they possess any interest in the sport prior to entering the theater. Lauda first posed the question of what kind of person would willingly participate in Formula One racing knowing the risk. “Rush” is an example of two of these people that couldn’t be more different off the track that become entangled in each other’s legacy, ultimately driving (and taunting) each other to greatness. Howard’s respect for this legacy is matched by his respect for the audience’s attention. “Rush” isn’t the most dramatically powerful biopic of the year, but it is highly enjoyable and finely tuned in nearly every regard.

Taylor is a Chicago-based writer and aspiring film historian. He is the editor here at TFP, and has contributed to a number of international publications such as Cinema Scandinavia, PopMatters, and Room 101 Magazine. He can also be found listening to podcasts, researching topics he has little use for, or running after a city bus.
You might also like
Alexandra Maria LaraChris HemsworthDaniel BrühlOlivia Wilde

by Janneke Parrish on May 18, 2014
“Der Untergang” – translated into English as “Downfall” – is a 2004 film about the last days of WWII in Berlin. Much of its plot focuses on what goes on in Hitler’s underground bunker, though the story by no means fixates on Hitler. Rather, it drifts to many of the major players in the last […]
comments
Leave a reply
Add Comment Register

END_OF_DOCUMENT_TOKEN_TO_BE_REPLACED
Taylor Sinople Picks: The 16 Best Films of 2016
Form and Function in Alex Ross Perry’s “Queen of Earth&...
Digging for Fire and Unexpected: Husband and Wife Process Parenthoo...
Every Thing Will Be Fine 3D Review