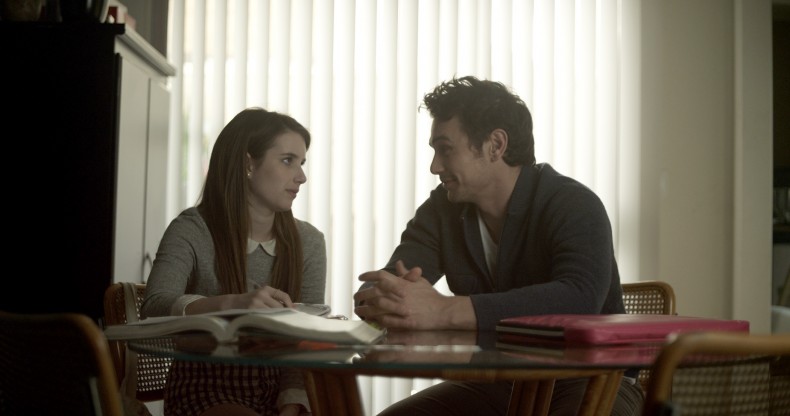 A few decades ago filmmakers were content with leaving the most troubling parts of adolescence off screen. Hughes had a way with keeping the inflictions in the past, but showing us the damage they’re causing in the present – a technique perfected in the back-and-forth images of Cameron and the Seurat piece in “Ferris Bueller’s Day Off.” Today, coming-of-age dramas can be far more revealing, exposing the nauseating recklessness of youth and reflecting an increased transparency for long-avoided subjects like teenage alcoholism. Is the experience of the seventeen-year-old changing? Or are we simply less afraid of revealing the more turbulent parts of growing up?

“Palo Alto” isn’t truly a “coming-of-age” story, though. These characters are too perilously stationary to move through that “growing and learning” arc. Teddy (Jack Kilmer) – the “good kid” – and his best friend Fred (Nat Wolff) – the “bad influence” – are two high school stoners who spend their nights in parking lots skating, drinking, and challenging each other with off-the-wall “what if” scenarios in lieu of any serious conversation. Teddy has a crush on April (Emma Roberts), a quiet girl that hangs out in some of the same house parties despite frequently being called the “virgin” by other girls with only the pretense of endearment. This natural palette of characters you can find at any high school in the country begins to spiral out of control when April becomes romantically involved with her soccer coach (James Franco) and Fred’s recklessly impulsive acts of youth and adventure begin to hint at violence.

Gia Coppola (granddaughter of Francis Ford, niece of Sofia) adapted “Palo Alto” from James Franco’s series of short stories published under the same name.  As a first time director, Coppola is up against the weight of her family’s body of work, and she does a fine job at distancing herself from what makes some of Sofia’s films work (“The Virgin Suicides” is most comparable). Coppola has patience and an eye for detail that shows a lot of promise. There is virtually no gloss applied where others would romanticize or over-embellish (see: Kirsten Dunst, sun-drenched, hanging out a car window in “Virgin Suicides”). Instead, “Palo Alto” feels a lot like real life. Fred is an out-of-control wildcard, but not implausibly so. No one is impossibly funny by way of a Seth Rogen comedy, and the spikes of drama that enter the kids’ lives feel only as severe as things real kids with less-than-perfect upbringings may have to face while finding themselves.

Emma Roberts (“It’s Kind of a Funny Story,” “We’re the Millers”) is the most accomplished on the younger side of the cast, yet she exudes no more celebrity than any of the other actors – many of whom are first-timers. Jack Kilmer (son of Val, who also appears in the film) brings a lot of disorientation to Teddy – a more sensitive character than anyone around him. They’re all pretty screwed up and lost (a college counseling session leaves April in tears), but Teddy is aware that he’s quickly coming to represent squandered promise, and yet still can’t help himself from making dumb decisions with Fred. These characters are all trying, yet fall back on choices that leave them in trouble with the law and each other, suggesting that the ultimate instigator of failure is boredom.

So Coppola has an authentic take on well-worn themes, and a lot of acting power on her cast, but it is her form that becomes the limiter here. Just because the characters are wandering through life doesn’t mean the entire film also must. There’s a cohesive and moving story growing, but it’s broken up and denied full impact by a scatterbrained approach to telling it. Vignetted, “slice of life” presentation is at times appropriate, but here it feels as though we never get to nail down much of anything and the greatest moments slip through Coppola’s fingertips. Nearly every “rock bottom” moment takes place when a character is alone, and the cumulative effect is that we rarely get to see these characters actually work anything out with each other.

Another disappointing choice is the depiction of nearly every adult in the film as out-of-touch and uninteresting. This is probably in an effort to maintain the seventeen-year-old point of view, but it feels wrong to rob the film of any compelling adult performances.

“Palo Alto” conveys the precarious balance between the kind of troublemaking and boundary pushing that’s healthy for teenage development and the kind that can set a kid down the wrong path. This is a fairly hard-to-watch film. It’s an exercise in witnessing self-destruction at the youth level. Coppola channels a lot of influences – from recents like “The Perks of Being a Wallflower,” to bigger classics like “Fast Times at Ridgemont High.” Phoebe Cates’s nude scene from the latter film is actually featured in “Palo Alto,” but while Coppola shows promise and confidence in her debut film, its aimless plotting leaves it without the permanence of those larger genre staples.
Continue Reading Issue #3

Taylor is a Chicago-based writer and aspiring film historian. He is the editor here at TFP, and has contributed to a number of international publications such as Cinema Scandinavia, PopMatters, and Room 101 Magazine. He can also be found listening to podcasts, researching topics he has little use for, or running after a city bus.
You might also like
james franco

END_OF_DOCUMENT_TOKEN_TO_BE_REPLACED
Taylor Sinople Picks: The 16 Best Films of 2016
Form and Function in Alex Ross Perry’s “Queen of Earth&...
Digging for Fire and Unexpected: Husband and Wife Process Parenthoo...
Every Thing Will Be Fine 3D Review