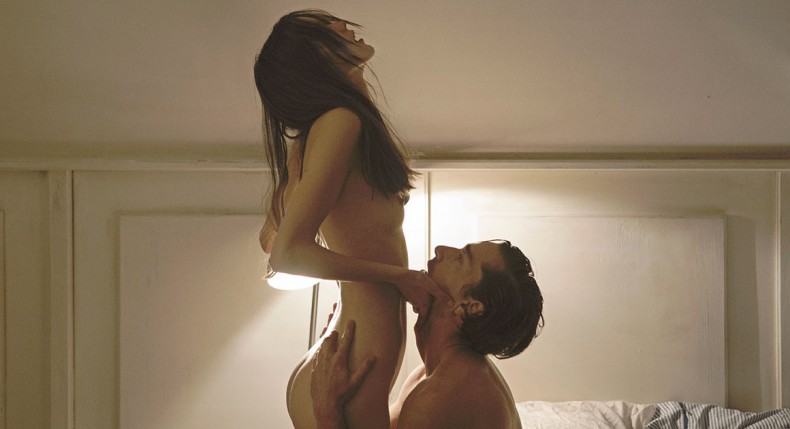 Volume I of Lars von Trier’s 4-hour epic on sex addiction is a nearly perfect execution of blending boundary-pushing shocks with comedy, drama, and beauty.

Lars von Trier, modern provocateur and master of tone, conquers depression and depravity in his thematically related trilogy of depth-plunging terrors that began with a woman’s nightmarish grief in “Antichrist.” A tale of internal and external apocalypse followed in “Melancholia,” and now is rounded out by the epic, four-hour opus of sex addiction and self-destruction, “Nymphomaniac.”

We open, as should be tradition in a von Trier film, with a minute of darkness and silence.

Then, a dark and rainy alleyway. A middle-aged woman, battered and bruised, passed out on the stone. A kind, older man (Stellan Skarsgård) discovers her and escorts her to his apartment for warmth and a cup of tea. There, Joe (Charlotte Gainsbourg) introduces herself and, somewhat obligated to offer an explanation, begins her story. But in order to explain how she ended up beaten in the street, she must start at early childhood – when she first discovered “the sensation.”

“Nymphomaniac: Vol. I” is an epic collage of styles and stories that recounts the first half of Joe’s life as a sex addict (Vol. II will follow next month). Joe, a self-described “bad human being,” started with a curiosity for sex and the human body that led to obsession, and eventual nymphomania. In her teenaged years, her sexual hunger runs rampant, largely enabled by her best friend (Sophie Kennedy Clark) who suggests a friendly competition: who can sleep with more men on a train before it reaches its destination? As a young adult, Joe has her roster of partners scheduled to the minute – one out the door, another in.

What does the older man make of this? He doesn’t know much about this kind of promiscuity, but draws on his own interests to add to the conversation. He argues that she doesn’t deserve her own self-deprecation, but as her story goes on and grows darker, it becomes more difficult to dismiss her actions as those of a hormonal and wild youth.
In between segments of Joe as a young woman (played by Stacy Martin in the flashbacks), the man interrupts the story to draw parallels between her life and various aspects of fishing or music. The focus and direction of Joe’s story is profoundly impacted by the man’s input. She runs with the thoughts the man introduces, and incorporates them into her dynamic narration to create the convincing impression that the film is unfolding in front of us for the very first time. While not driven to the point of full ambiguity, the events of Joe’s life are not so tightly tethered as to be definitely authentic. The man often doubts her, and there’s room for multiple readings of the material and metaphors to be found, perhaps even an allegory.

The scope is large, but the many-chaptered format is closer to a series of chronologically ordered short films than an uninterrupted feature. Chilean cinematographer Manuel Alberto Claro (“Melancholia”) photographs the film with splendor – in black and white or in color, with super-smooth crane shots or with shaky, rough handheld shots, and with a variety of aspect ratios. Each chapter holds its own style. There’s also some hilarious effects done with on-screen text that I won’t ruin for you here, but contribute a lot of dark comedy to loosen up the otherwise unsettling tone.

Von Trier is genuinely aiming to get to the bottom of sex addiction. This is the story of an entire life dominated by a desire for sex and rebellion against love. The meaning and purpose of sex in Joe’s life changes as she grows older, and it’s a fascinating journey into the extremes of human behavior. Joe is at first nothing more than an “observer of love,” but she later may come to understand and even feel it through a bizarre connection to a random man (Shia LaBeouf). By the time the first volume has ended, the way Joe sees the interactions and differences between love and sex is still unclear.

The explicit and X-Rated nature of the filming process has been well talked-up in the media and indeed there is real sex and unrestricted nudity featured onscreen, but these images – while of an unprecedented level of exposure – feel entirely appropriate within the world of the film. The most graphic moments will likely be used as ammunition against the theatrical release, but experiencing that stunned, jarred reaction to “over-the-line” content is an important part of a von Trier film – especially one named “Nymphomaniac.”

Most importantly in this talk of X-rated content is the fact that the most audacious and uncomfortable scene in the first volume has nothing to do with intercourse but the consequences of it. Here enters Uma Thurman in an unexpectedly shattering performance as the wife of a married man that Joe has been sleeping with. Thurman brings her children to Joe’s apartment so that they may meet the woman who is destroying their family. Von Trier pushes this scene so far that we are inexplicably stuck somewhere between laughing and crawling out of our skin. Total awe, and all of it within a PG-rating (okay, there’s a lot of language).

While “Nymphomaniac” does stop short of something like the infamous genitalia mutilation scenes in “Antichrist,” he nonetheless is pushing the boundaries of mainstream cinema further than ever with a confident and unrestricted depiction of sex addiction from a very young age. The formal, aesthetic elegance of the photography and the classical score maintain a sense of tastefulness throughout – an outrageous feat of provocation. While Gainsbourg is billed as the lead, the first volume primarily follows Stacy Martin’s version of Joe from ages fifteen to mid-twenties. Martin in nearly every sense “bares all” as a first time actress, and sets up a strong momentum for Gainsbourg and other more experienced actors to take over in the second volume once the characters have advanced in age.

“Nymphomaniac” is intellectually and emotionally disruptive. There’s only blurred lines to suggest where the art film begins and the typical drama ends. The mood slips between humor, shock, and horror unnoticed. Audiences will laugh out loud one minute and find themselves deeply disturbed the next. It’s easy to reminisce the loss of work from a filmmaker as confident and tenacious as Bergman and not notice those very traits are at work in von Trier here, now, with his best film in a decade.

Taylor is a Chicago-based writer and aspiring film historian. He is the editor here at TFP, and has contributed to a number of international publications such as Cinema Scandinavia, PopMatters, and Room 101 Magazine. He can also be found listening to podcasts, researching topics he has little use for, or running after a city bus.
You might also like
Charlotte Gainsbourglars von triersex addictionShia LaBeouf

by Taylor Sinople on April 6, 2014
Note: This review contains spoilers from “Nymphomaniac: Vol. I,” read that review for an introduction to the two-part series.  “Nymphomaniac: Volume II,” the second chunk of Lars von Trier’s four-hour epic on sex addiction and self-destruction, begins in the middle and, as you might expect, loses momentum for it. Von Trier’s preference for the film […]
comments
Leave a reply
Add Comment Register

END_OF_DOCUMENT_TOKEN_TO_BE_REPLACED
Taylor Sinople Picks: The 16 Best Films of 2016
Form and Function in Alex Ross Perry’s “Queen of Earth&...
Digging for Fire and Unexpected: Husband and Wife Process Parenthoo...
Every Thing Will Be Fine 3D Review