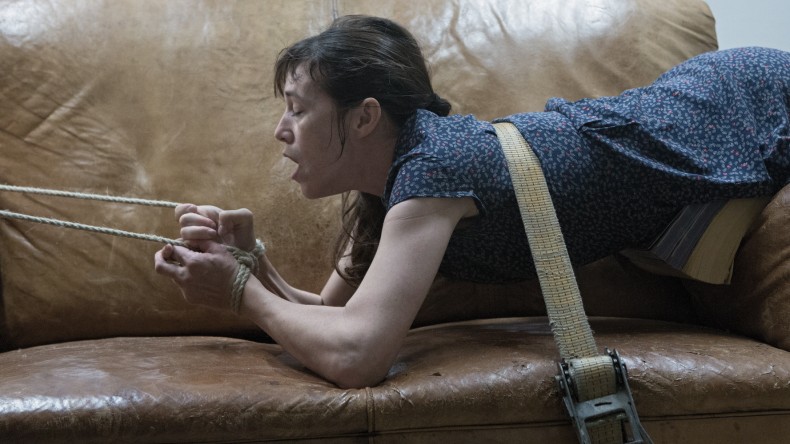 The second volume of Lars von Trier’s “Nymphomaniac” loses its grip on the stylized and balanced storytelling of the first film, leaving less interesting, more controversial scenes that lead to a disappointing conclusion.

Note: This review contains spoilers from “Nymphomaniac: Vol. I,” read that review for an introduction to the two-part series.

“Nymphomaniac: Volume II,” the second chunk of Lars von Trier’s four-hour epic on sex addiction and self-destruction, begins in the middle and, as you might expect, loses momentum for it. Von Trier’s preference for the film to be viewed as a single, unbroken piece (reportedly at over five hours in his director’s cut) makes a lot of sense upon seeing how little “Volume II” resembles a sequel so much as a necessary jump back into no-mans land, far from the introduction or climax. Act two isn’t a great place to kick things off, and the split (done for distribution purposes in the US) also isolates the weaker and less productive of the two volumes to a stand-alone release, leaving a stain on the triumph of the first film and introducing the unfortunate caveat: “Nymphomaniac is great, well, the first half is great.”

As a young adult, promiscuous, anonymous sex was enough for Joe (Stacy Martin). Then it wasn’t. At the end of “Volume I,” she’s lost all sexual desire – an existential crisis for someone whose entire life has been defined by nymphomania. Now, passing through her twenties and living with Jerome (Shia Labeouf) and their child, she decides she must do whatever it takes to “get her life back.”

It’s also at this point that Trier chooses to age up the characters and replace the actors. Stacy Martin passes the torch to Charlotte Gainsbourg, who has thus far portrayed Joe in the present day with the deeply assured self-loathing that makes her frequent performances for von Trier’s contentious work so essentially understated. Peculiarly, though, the actors aren’t switched out at the same time, leaving us with Gainsbourg’s Joe (43) on-screen with LaBeouf’s Jerome (27) despite it being well established that Jerome is older than Joe. Then, in the final scenes, an older actor with little resemblance finally replaces Labeouf but only appears briefly, leaving his crucial actions untied to the character of Jerome that we’ve accepted as LaBeouf for the past four hours.

In the present, from which Joe is retelling this long story in an instance of accidental therapy, we get a chance to learn more about Seligman’s (Stellan Skarsgård) life and contrasting innocence to Joe’s corruption. The power dynamic between the two is shifted in this second volume as Seligman’s intellect is taken at less value and attention is shifted instead to his lack of life experience. As they continue their musings on right and wrong in between chapters of Joe’s story, von Trier again builds in explanations for why the events of Joe’s life may seem unbelievable. Seligman’s cautious doubt and a montage that revisits all the objects in the room from which Joe has used to shape her story remind us that this is in fact a sort of fairly tale that doesn’t need to be declared absolutely true or not to be effective.

But where the first volume took licenses in believability through coincidences and chance meetings, Volume II jumps off the rails completely with a journey into underground crime as Joe works her way towards the eventual, climactic alleyway scene. The explanation for Joe’s lifeless, beat up body ending up in that alleyway is the only time von Trier truly pushes the envelope too far. We have to work harder than ever in the final moments to work with the film’s persistent, and eventually outlandish, degradation and punishment of Joe. Eye rolls may finally happen, which is such a shame after von Trier managed to legitimize the chaos for so long.

The second volume of “Nymphomaniac” pulls apart the balanced discussion of Joe’s morality and insists upon her wickedness in ways that the first volume left you to decide. In the last, fleeting moments, suggestions of absolute truth are introduced that undo the impressive objectivity that so importantly set apart this story about “bad people” from others. An eventual viewing of the uninterrupted five-hour piece may clear up some of this dissatisfaction, but in this initial theatrical run, “Volume II” is a film far more interested in running away with controversial digressions for the sake of provocation than challenging legitimate discussion on nymphomania and ethics.

Taylor is a Chicago-based writer and aspiring film historian. He is the editor here at TFP, and has contributed to a number of international publications such as Cinema Scandinavia, PopMatters, and Room 101 Magazine. He can also be found listening to podcasts, researching topics he has little use for, or running after a city bus.
You might also like
Charlotte GainsbourgJamie Belllars von triernymphomaniac

by Taylor Sinople on March 27, 2014
Lars von Trier, modern provocateur and master of tone, conquers depression and depravity in his thematically related trilogy of depth-plunging terrors that began with a woman’s nightmarish grief in “Antichrist.” A tale of internal and external apocalypse followed in “Melancholia,” and now is rounded out by the epic, four-hour opus of sex addiction and self-destruction, […]
Comments
Leave a reply
Add Comment Register