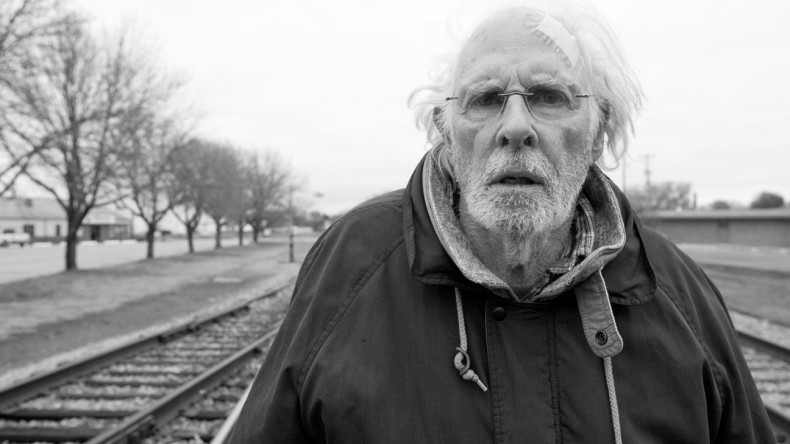 Bruce Dern and Will Forte travel the American Midwest together as father and son in “Nebraska” – a gentle, stirring picture that tactfully balances comedy and poignancy.

Alexander Payne is a master at capturing road trips pragmatically, the kind filled not with wacky situational comedy and bombastic, youthful exuberance, but monotony, disappointment, and the occasional, quiet impression of a life lesson.

Woody Grant (Bruce Dern) is obsessed with traveling to Nebraska. What’s in Nebraska? A whole bunch of very flat land, long stretches of highway, and one million dollars. Woody’s been determined to get his million dollars ever since he received a marketing sweepstakes promotion in the mail and became convinced that the money is real and waiting for him. Walking straight out the front door and down the highway on foot towards Nebraska some nine hundred miles away, Woody is finally offered a ride by his son, David (Will Forte), who reluctantly agrees to play out this fantasy for the sake of spending time with his aging, possibly senile father.

Along the way, the father-son road trip takes a detour to Woody’s home town of Hawthorne, Nebraska where they’re met by Woody’s wife (June Squibb) and David’s older brother (Bob Odenkirk). There, the Grant family sifts through memories of Woody’s past and try to convince him not to go through with the rest of the wild chase after a scam.

Alexander Payne (“Election,” “The Descendants”) adds another memorable entry to his repertoire of wallflower characters with “Nebraska.” Like the Miles character in Payne’s “Sideways,” Woody is a little pathetic, a little sad, but somewhere in there has an open heart. He’s been an alcoholic his whole life (“Beer ain’t drinkin’”) and doesn’t offer more than a few grunted words at a time to anyone. David comes to know his father in new ways, though, after visiting the places and people he grew up with. The town of Hawthorne is home to pieces of a man David didn’t know existed, and by uncovering them he begins to sculpt away at a better image of the white-haired, flawed man that raised him.

“Nebraska” is one of the more adult films of the year in terms of its retrospective nature. Age and personal experience are definitely factors as to whether this will connect or not. The screenplay (written by Bob Nelson) takes great interest in the important notion of reflection in our later years – to learn from what others have done and then eventually look back at our own lives and find peace with what’s there. David and Woody’s trip unfolds slowly. It may even be a bit boring, but the relationship between these two is ultimately exceptionally moving. The deliberate pace rewards you in the end by allowing the characters’ unlikely bond to seep in. If all else fails to compel, it’s hard to deny the hilarious deadpan writing. There are at least three laugh-out-loud funny scenes snuck in the middle of some otherwise glum revelations, and the shuffling rhythm of the vignettes that make up the two-hour film from light comedy to poignancy really makes “Nebraska” a substantial pleasure to discover.

Beautiful Nebraskan landscapes sit in between each new scene, all of which is shot in unimposing black and white by cinematographer Phedon Papamichael who used an Arri Alexa digital camera with 1970’s anamorphic Panavision lenses. The result of this digital/film tech mash-up is a filmic look in the wide shots and a digital look in the close-ups. There’s not a whole lot of use of the unique contrast capabilities of the black and white image aesthetic, instead suggesting that this decision was made mainly as a poetic artifact of the narrative. I found it to be motivated and appropriate to the story, if not a little distracting considering the effect looks too filtered and clean on digital media. Still, along with “Frances Ha” earlier this year it’s promising to find more American films embracing the mood and power of black and white.

Bruce Dern, awarded Best Actor at Cannes 2013 for this performance, assures us that despite a few quiet years, the best is still ahead of him. There are never enough late career masters, and Dern’s intensely physical performance in “Nebraska” shows he is one of them. It’s his wild look, his movement, his hacking cough, and his unsteady pace that sells Woody’s old age and possible senility. Woody is up to something with this prize-winning fantasy of his, and we’re never quite sure whether it’s a delusion, or something more like willful ignorance. Complex stuff to bring to life.

Opposite this well-seasoned dramatic actor is “Saturday Night Live” favorite Will Forte. The guy is a natural at adapting. After doing a “MacGruber” film in 2010, Forte shows up in “Nebraska” with an immense desire to succeed dramatically and does so in part thanks to his eye for comedic timing. Payne’s films are all about emphasizing the comedy in very human moments. Forte brings this naturalism to the table and most importantly convinces us that he cares about Woody through all of his odd behavior and past mistakes as a father. When we first come into David’s life, he’s living a passive existence in Billings, Montana as a home theater salesman and not much else. His longtime girlfriend moves out, telling him she doesn’t care whether they get married or break up – he just needs to do something. As it turns out, taking his father on a wild trip after a mythical million dollars is just the something that he needed. From the start, “Nebraska” isn’t about the money. The joy is in discovering what the money really means to Woody and how far David will go to let him live out the fantasy of winning it.

END_OF_DOCUMENT_TOKEN_TO_BE_REPLACED
Taylor Sinople Picks: The 16 Best Films of 2016
Form and Function in Alex Ross Perry’s “Queen of Earth&...
Digging for Fire and Unexpected: Husband and Wife Process Parenthoo...
Every Thing Will Be Fine 3D Review