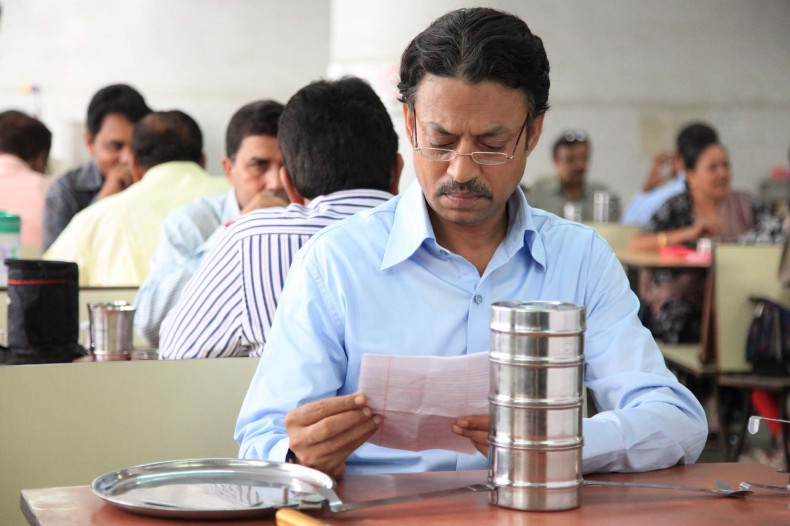 Ritesh Batra explores the subjective contentment of life and happiness of two people as they share a conversation through a misplaced lunchbox.

“The Lunchbox” starts out as a story of a neglected wife who makes an effort to re-invigorate her failing marriage by making special lunches for her husband. The story gains momentum, as this lunchbox is delivered to the wrong person through a miracle of odds.

A miracle indeed, since the lunchbox delivery system in Bombay is almost error free. For the uninitiated, it is common in Bombay for lunches to be delivered to offices by a sophisticated network of humble deliverymen who call themselves – “Dabbawalas”. These hardworking men collect close to 200,000 lunchboxes from homes and deliver them to the right offices precisely at lunchtime. Later in the day, the process is reversed as the empty lunchboxes are delivered back to the houses they came from by afternoon. They perform this circus of co-ordination without any computers or paperwork, and they do it with perfect precision and timing as only one in sixteen million lunchboxes are expected to be misplaced. The dabbawalas pride themselves in this efficiency and their near perfect system has been acknowledged by the likes of Harvard, Forbes, New York Times, and even Prince Charles.

In the film however, the lunchbox is repeatedly misplaced day after day; something the dabbawalas might not be very happy about, but it’s a conceit we are happy to believe in. Following the delivery of the lunchbox, we are introduced to Mr. Fernandes (Irrfan Khan) as the lunchbox lands on his desk. Soon, Mr.Fernandes and Ila (Nimrat Kaur) find themselves in a conversation that breaks them away from their cyclic routine and with which comes the thrill of flirtation and the comfort of anonymity. Writer/Director Ritesh Batra pays extra attention to these moments as these letters become the only source of joy in each other’s lives. The conversation starts with food and slowly becomes an avenue to vent thoughts that they could share nowhere else. The film builds their relationship slowly while giving us an insight to these character’s pasts through the secrets they share in these letters.

Irrfan Khan creates a complex and affable character with very few spoken words for a protagonist. Nimrat Kaur also performs well, as she mostly does the indie equivalent of green screen work, wherein she performs most scenes with no other actors. The bar of this film is raised higher by its supporting cast; namely Bharati Achrekar as the (off-screen) Mrs. Deshpande and Nawazuddin Siddiqui as the over enthusiastic trainee – Shaikh. They are introduced as lighthearted comic characters, but Batra adds another layer to the story as these characters are fleshed out further over the course of the film. Even though they play a small part, Batra gives these characters hopes and aspirations, struggles and victories, who in turn affect the lives of our protagonists as well.

On a technical level, the film is no masterpiece. The cinematography is sub-par, with good art direction and decent compositions every now and then. The sound design is accurate to the environment, but the surround mix barely ventures away from the front speakers. The footage from various types of cameras used do not match well on screen and there are inconsistencies in the color grade. Do not expect to see the punchy vibrant India that Deepa Mehta has shown us in the past. Music is notably absent throughout most of the film, which works for setting Batra has created. He also manages to keep the scenes with the letters interesting by including various visual parallels and not relying solely on voiceovers to deliver the exposition.

Batra grounds the film in documentary like realism and in a pleasant contrast, plays out the story like a fable. This story treatment mirrors a recurring theme where characters juggle between their dreams and the grim reality at hand. He also explores the nature of isolation and monotony through Ila and Mr. Fernandes. The characters are placed in very prosaic settings; Mr. Fernandes works in an old office surrounded by paper and Ila lives in a tiny apartment of an old building. They are both given settings that are chained to the past somehow, and have refused to move forward with time. One finds solace in the stagnation while the other yearns for a better life. As their relationship develops, we notice these characters are not looking for a passionate romance, nor are they even remotely interested in the sexual stimulation of an extra-marital affair. They have past the stages in life where happiness was relatable to those things. In their current solitude, all they seek is someone to talk to at the end of the day.

In the end “The Lunchbox” is not really a love story, it has less to do with love and more to do with the need of love in our lives. The marketing departments around the world have done a great disservice to the film by promoting it as a romantic comedy. “The Lunchbox” is a lighthearted drama that tackles on a lot more than the accidental friendship of two lonely people. Keep an eye out for some homespun wisdoms sprinkled throughout the film, it might help you read into the film a little better.

by Janneke Parrish on March 1, 2015
Billu teaches us that film stars are gods, or perhaps that they’re not. I’m not really sure.
Comments
Leave a reply
Add Comment Register

END_OF_DOCUMENT_TOKEN_TO_BE_REPLACED
Taylor Sinople Picks: The 16 Best Films of 2016
Form and Function in Alex Ross Perry’s “Queen of Earth&...
Digging for Fire and Unexpected: Husband and Wife Process Parenthoo...
Every Thing Will Be Fine 3D Review