Jim Jarmusch and vampires prove to be a perfect cinematic match in "Only Lovers Left Alive:" a profound story of immortality and infinite romance.

“Only Lovers Left Alive,” seven years in the making, may be a bit behind the curve on the vampire trend, but with Edward Cullen and Bella now officially out of American vernacular for good, vampires have a chance to be interesting again. And under the direction of Jim Jarmusch, they’ve never been cooler.

What better fit for the contemporary vampire than the life of a reclusive musician? Boarded up in a decrepit mansion in Detroit, Adam (Tom Hiddleston), a slender, bony figure with draping, jet-black hair, surrounds himself with relics of the analog age and produces avant-garde noise rock that has captivated an underground audience despite his detestation of fame (side note: if Thom Yorke ever goes missing, someone check Detroit).

But it’s never good when a vampire orders a wooden bullet. Adam values the sublime, but sees only decay. Humankind (“zombies,” as he calls them) is tainted – even our blood is risky to drink when not pure. Caught up in gloom and mounting despair, he becomes the “sands at the bottom of an hour glass,” and calls upon, from the seedy streets of Tangier, Eve (Tilda Swinton) – his eternal lover –to help him “turn the glass over.”

Jarmusch, with his iconic white hair and affection for outsiders of all kinds, seemed destined to bring complexity and intellect back to the undead. Many may expect a Jarmusch film diving into a genre like this to be “not really about the vampires,” and yet he proves to be not only genuinely interested in exploring the lives, thoughts, and feelings of immortals, but capable of doing so in an effortlessly stylish, sexy, and atmospheric mood that digs itself into every branch of the production. Cinematographer Yorick Le Saux (who shot “Clouds of Sils Maria” for Olivier Assayas – set to debut at Cannes 2014) keeps the lighting set-ups unique in a film that takes place entirely at nighttime. The orange buzz of sodium vapor streetlights, dim, interior lamps, and the glow from the dash of Adam’s classic sports car are are all that illuminates Marco Bittner Rosser’s bleak production design that treasures luxurious, velvet furniture and century-old fabrics. The only thing more mood-inducing than the look is the sound. Adam’s music – chunky, sustained guitars and droning feedback set to the hypnotic rhythm of a rat-tat crash cymbal – is scored brilliantly by Jarmusch’s own noise rock band Sqürl.

But while the rich visual and sonic aura checks all the boxes on the “great vampire movie” list, Hiddleston and Swinton make “Only Lovers Left Alive” many other things – above all, an intense romance. We’re shown Adam and Eve’s powerful bond in the film’s opening shots: the camera slowly spins high above them as they stare up at the ceiling – separated by an ocean, yet deeply connected. When they are physically together, in Detroit, every look and touch is charged with knowing, century-long admiration. They dance together in the living room to Denise Lasalle’s “Trapped by a Thing Called Love,” and toast carefully poured aperitif glasses of O Negative. 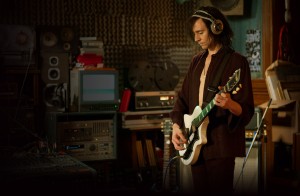 Swinton has always proved mutable when it comes to taking on new kinds of roles, but Hiddleston, who has gained fame primarily for his venomous villain character in “The Avengers,” may bring to the film leagues of fans who will end up checking their watches during this distinctly art-house take on vampire romance that plays out through dialogue rather than action. There is a great deal of humor in this screenplay, but a lot of it relies on a working vocabulary of cultural history. Knowing names like Faust and Caligari. Preconceptions of the lead actors and the genre leave “Only Lovers Left Alive” with some tricky hurdles to overcome in attracting the right audience.

The supporting players, though, allow the film some wonderful moments of broad comedy. A vampire version of Christopher Marlowe is the role we never knew we needed from John Hurt, who plays that famous Elizabethan poet with grandeur, going as far as to confirm that he did, in fact, write Shakespeare’s plays. Mia Wasikowska (“Stoker,” “Jane Eyre”) plays Eve’s younger sister who has been immortalized with the spirit of a reckless teenager, and Anton Yelchin (“Like Crazy”) provides the biggest laughs as Adam’s human friend who procures for him vintage guitars and yet seems completely unaware that there’s anything strange about a man that refuses to see daylight and goes months without a functioning bathroom in the house.

Jarmusch seems to be most interested in understanding how any one lifespan – a mere hundred years – would appear through the lens of immortality. Adam and Eve, through their combined centuries of experience, answer the desire of every historian, artist, and researcher for knowledge thought to be forever lost to the fuzzy memory of distant history. What was Mary Wollstonecraft really like? Adam and Eve could tell you from first hand experience, and then go on to share stories about the Black Death, the medieval age, and their admiration for Jack White of The White Stripes, all in the same breath.

Jarmusch looks to the past and clearly treasures the work of those legendary artists, but also seeks to understand how future generations will view our own time. From Adam’s viewpoint, the future doesn’t look promising for humankind.  If he seems like a bit of a Romantic, that’s because he is. He did, after all, call the likes of Byron and Shelley his close friends. But while he gets easily caught up in the follies of man, Eve has several thousand years on him and carries better understanding of the ups and downs of humanity – offering a joyfully repugnant perspective to the value of human life (we are, after all, just a blip on the map if the scale is large enough).

Are we more likely to side with Eve just to avoid Adam’s condemnation? On our willful destruction of the planet, Adam remarks near the end of the film, “they never notice until it’s too late.” In the end, we all will bask in the dark extravagance of “Only Lovers Left Alive” without considering that perhaps Adam is right. This is Jarmusch’s one shot at capturing vampirism as drama, and he spends two hours exhausting the profound nature of immortality, bloodsucking, and infinite romances. The phrase goes “If the dead could speak…” and here, they do.

Taylor is a Chicago-based writer and aspiring film historian. He is the editor here at TFP, and has contributed to a number of international publications such as Cinema Scandinavia, PopMatters, and Room 101 Magazine. He can also be found listening to podcasts, researching topics he has little use for, or running after a city bus.
You might also like
Anton YelchinJim JarmuschJohn Hurtmia wasikowska

by Josef Rodriguez on November 2, 2014
Despite its heavy material, “Rudderless” is an enjoyable and surprisingly fun movie that sometimes veers into manipulative territory, regardless of how watchable it may be.
comments
Leave a reply
Add Comment Register

END_OF_DOCUMENT_TOKEN_TO_BE_REPLACED
Taylor Sinople Picks: The 16 Best Films of 2016
Form and Function in Alex Ross Perry’s “Queen of Earth&...
Digging for Fire and Unexpected: Husband and Wife Process Parenthoo...
Every Thing Will Be Fine 3D Review