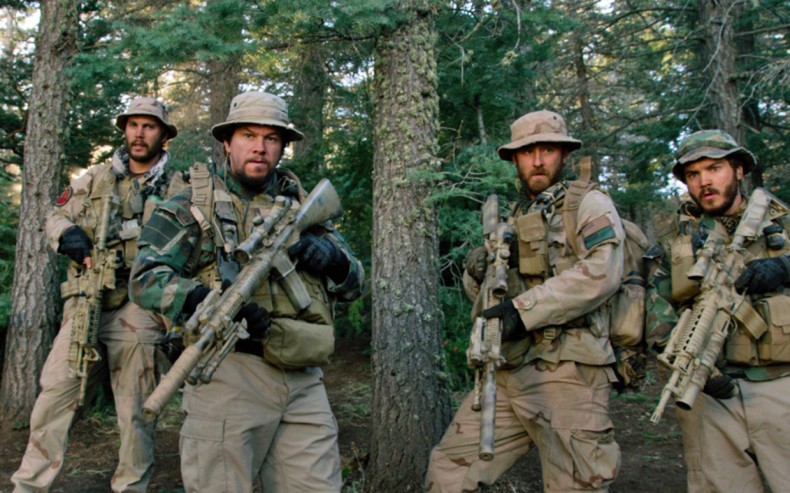 “Lone Survivor” occasionally struggles to hold back the shallow spectacle of lesser action films, but for the most part manages to capture this real-life operation gone wrong with respect and heaping tension.

A 4-man Navy SEAL team is deployed in an Afghanistan mountainside to take down a known terrorist when they’re attacked by local Taliban forces. Outnumbered, backed against a cliff, and out of contact with command forces, the squad makes a desperate run for higher ground in a true story based on a memoir by Marcus Luttrell, the only surviving member of the operation.

Peter Berg (“The Kingdom,” “Battleship”) directs the tension that begins the moment you tell the cashier which movie you need a ticket for. Right then you’re acknowledging the inevitable outcome for the squad. ”Lone Survivor” is being approached by many with wariness. The propaganda issue is one that will both hold back and drive viewers to theaters. Is Berg’s film an easy excuse to sneak a 2-hour Navy commercial into our lives? The opening of the film certainly feels that way. Documentary footage of real soldiers pushing themselves to the limit in training plays behind the credits to the sound of marching drums and murmured narration about the pact of brotherhood between soldiers.

We meet our four guys – played by Mark Wahlberg (as Marcus, the lone survivor), Taylor Kitsch, Emile Hirsch, and Ben Foster – in the clunky first act that can’t hide the fact that its jumping through the hoops of getting to know characters that won’t matter as much as the action later on. Even a simple dialogue scene is marred by the gratuitous whipping of the camera around the characters. It’s all capped off with the mission-briefing scene. As the SEAL team learns about their objective and route of entry, Berg crosscuts to a scene of Taliban forces beheading a group of civilians. Briefing. Beheading. Oh, I get it; the terrorists are the bad guys!

Luckily, Berg knows where his strengths lie with this story and doesn’t give us more than 20 minutes of this painful pseudo-dramatic stuff before zipping us out into the Afghan hillside for 100 minutes of effective action tension that will have you suspending your breath more than a few times. After getting away from that unfortunately necessary nonsense at the beginning that frames the story, “Lone Survivor” is impressive as a modest, no-tricks war film. Find the bad guys, kill the bad guys. The lack of contrived conspiracy plots and the like is refreshing.

The simple operation becomes complicated when the team, inserted into dangerous territory, runs into local goat herders and is forced to decide what to do with them. The herders look harmless enough, but their eyes couldn’t say it more clearly – they hate the Americans. Strapped to the oldest of the herders is a suspicious radio that suggests they may be in contact with Taliban forces. Marcus and his three squad-mates debate the Rules of Engagement and the importance of moral integrity in this high-risk situation. Letting the locals go may allow them to run straight to the enemy and inform them of the tactical unit’s location. On the other hand, they risk unknown consequences for themselves and the U.S. as a whole if they were to be involved in the murdering of civilians. Berg shows here that even with incredibly intense action sequences that shortly follow this decision, he can handle dialogue-generated suspense just as well as long as the stakes are at critical levels.

The soldiers’ decision leads them to being tracked and assaulted by a large group of Taliban forces that significantly outnumbers them in infantry and firepower. Their desperate retreat for survival and decreasing odds of successful extraction is the centerpiece of the film. They are the new standard for worst-case scenario in this kind of behind enemy lines tactical operation. When the SEALs are forced to open fire, the action plays out with little padding from music or over-the-top effects. There’s a definite sense of realism. If this all really happened as Marcus described it in his memoir, this is about what it would look like. An uncontrolled, bone-crunching tumble down a cliff-side in particular is viscerally captured to the point of discomfort.

The material is treated with respect from everyone down the line and it makes a real difference, you can feel it. Mark Wahlberg exudes little star power, correctly interpreting the right time and place to (or not to) steal the show as the most well known performer in the cast. There’s no particularly notable characters or performances, but the story and action hold the focus well enough. This is a case where overproducing character arcs and developing in-depth backstories would only distract from the biographical responsibility of photographing this notorious military engagement. Best of all, no one says, “If we get out of this, I’m buying you a beer.”

On the other hand, there is a certain amount of push and pull with the finer details of firefights between reality and the ways that it’s portrayed on screen. It could well be a matter of ignorance on my end to the realistic effect of bullets, but it seems that Berg takes an enormous amount of license on the number of times a man can be shot and keep going – running, climbing, fighting. There’s also the very important issue of the glorification of sacrifice that appears unwelcomed once and a while. Tobias Schliessler shot the film for Berg and does a great job at covering most of the conflict – letting us see down the weapons’ sights and tracking the movement of the soldiers in dynamic shots. Close-ups using wide-angle lenses distort rather than beautify and further convey fear and desperation. It can’t have been easy to get the production equipment up on these hillsides (New Mexico stands in for Afghanistan). The hand held style must have been as much an aesthetic choice as a physical limitation. But there are certain shots – two major ones – that really break the spell of the tension by allowing the cinematic presentation to disrupt the very real events taking place. One is a horribly misplaced super-hero shot of the four soldiers jumping off a cliff through the smoke of the battle in ultra slow motion. This is the political manipulation that some will stay home to avoid. We see these guys fight to survive when it would be easier to give up; their actions shouldn’t be reduced to fiction with the “Die Hard” treatment.

There may be a few peeks behind the curtain into the film that could have been, but all in all “Lone Survivor” is about more than straight propaganda. Berg does an important thing in separating the Taliban extremists from the Afghan villagers that are as much an enemy of the terrorists as the soldiers are. Most importantly, Marcus’s life is saved not by his training or super-human ability but by the combined efforts of dozens. The effect is eliciting strong audience reactions in theaters – most empty in silence after glimpsing the photos of the real-life soldiers that lost their lives in the operation. Berg may fumble the people-drama in the early scenes of the soldiers, but once they’re sent into battle he handles the engagement with restraint and finesse.

Warning: in_array() expects parameter 2 to be array, string given in /home/thefocus/public_html/wp-content/themes/explicit/functions/reviews.php on line 124

Taylor is a Chicago-based writer and aspiring film historian. He is the editor here at TFP, and has contributed to a number of international publications such as Cinema Scandinavia, PopMatters, and Room 101 Magazine. He can also be found listening to podcasts, researching topics he has little use for, or running after a city bus.
You might also like
Ben FosterEmile HirschEric BanaMark Wahlberg

by Taylor Sinople on September 5, 2013
In a dingy, sepia-toned bar in 1970’s Texas, Bob Muldoon squares up to Sweetie – an old friend and the proprietor. Bob (Casey Affleck) recounts to Sweetie (Nate Parker) his very recent escape from prison. He was sentenced 25-to-life after a crime spree with his pregnant wife, Ruth (Rooney Mara), ended in a shootout. His […]
Comments
Leave a reply
Add Comment Register

END_OF_DOCUMENT_TOKEN_TO_BE_REPLACED
Taylor Sinople Picks: The 16 Best Films of 2016
Form and Function in Alex Ross Perry’s “Queen of Earth&...
Digging for Fire and Unexpected: Husband and Wife Process Parenthoo...
Every Thing Will Be Fine 3D Review