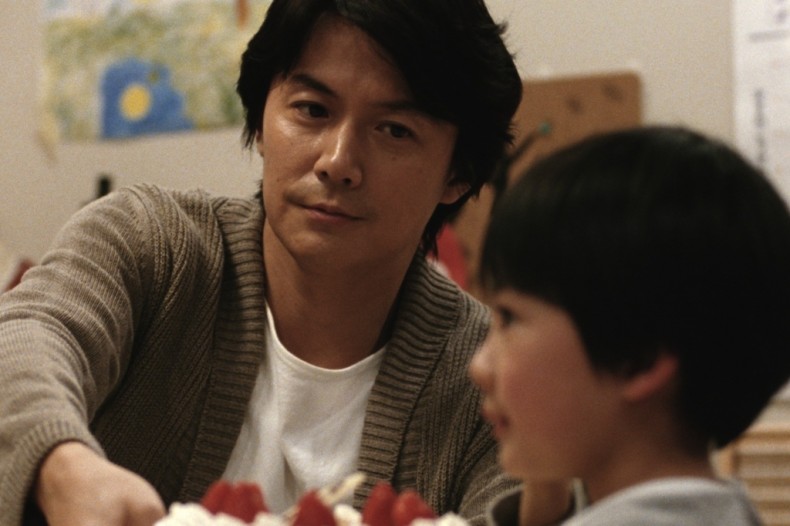 Imagine what the world could be capable of if we behaved as if in an important interview. Every conversation passed through shining teeth would gleam of the utmost respect and polite intention. That’s how we first meet Ryoto.

Ryoto (Masaharu Fukuyama) is a successful Japanese architect and a rigid, merit-driven father to his 6-year-old son Keita (Keita Ninomiya). Along with his wife, Midori (Machiko Ono), the family is interviewing for Keita’s place in a competitive private school program. Ryoto, sharing with the interviewers a few anecdotes about his son, speaks to Keita’s kindness as a great strength. It’s only after the interview has ended that we see some of the small cracks in the family emerge: the time Ryoto spends away from home, the questionable expectations he has of his son to succeed from an early age, and the perpetual argument between Ryoto and Midori about the best ways to raise their child.

Outside of the interview, the very kindness that Ryoto first attributed as strength is remarked as a weakness. This argument comes to a devastating head when they receive a call from the hospital informing them that, due to an overlooked clerical error, they took the wrong baby home six years ago. Now, Ryoto and Midori are left with the impossible decision of taking custody of their biological child whom they’ve never met, or continuing to raise Keita now knowing he is not their own blood.

Take the cheesy title and the “switched at birth” concept with a grain of salt, it’s the tender portraits of real, complex love that rise from the starting point that make “Like Father, Like Son” one of the best films about family ever made (it won the Jury Prize at Cannes in 2013). To call Hirokazu Koreeda’s masterful work “directing” is not enough – he conducts. Composition, lighting, sound, and content all form images of unified power. A single melancholic piano often traipses over his sublime imagery that at times is breathtaking in its utter simplicity and cleverness. The family sits around the kitchen table at night lit only by the candles of a birthday cake – the floor-to-ceiling windows of their high-rise condo backing them with the city’s flickering lights. Cinematographer Mikiya Takimoto (in his first credited film) pushes the limits of underexposure in this sumptuous shot, and then Keita blows the candles out and the family is left in silky, black silhouettes. Stunning work.

Later on, Koreeda composes shots that communicate visually as much about the story as the dialogue does aurally. Often this comes in the form of comparison between Ryoto’s family and the family that has for the past six years been unknowingly raising his biological son. They are the good-hearted, but slovenly Yudai (Rirî Furankî), his wife Yukari (Yoko Maki), and their son Ryusei (Shôgen Hwang). When the two families first meet to begin the discussion on whether swapping the children is something they could (and maybe should) do, they each lay down photographs of the two children side-by-side. Keita’s is a school picture – a formal suit and straight posture; opposite, Ryusei grins, shirtless in a candid beach photo. Ryoto quickly becomes agitated with Yudai’s carefree attitude (“Put off to tomorrow whatever you can,” he jokes), but his wife sees more in this shabby family that’s lacking in her own: cohesiveness, geniality, and plain old fun.

As a filmmaker and father, Koreeda no doubt relates to Ryoto’s frustrations with being unable to be home to raise Keita but unwilling to give up his professional ambitions. Masaharu Fukuyama, more famous as a musician than an actor, sits atop the likeability fence as Ryoto and so narrowly avoids becoming a detestable character only to surprise us with depth as more about his own upbringing is revealed. Everyone is in it together with this one. There’s no concrete action-elements to distract from the emotion stripped bare to the audience. It has to work, and it does. Two grandparents, four parents, two kids, and Koreeda himself all dedicate themselves to this intimate, artful account of working class people that grapple with a changing definition of family in contemporary Japan.

Taylor is a Chicago-based writer and aspiring film historian. He is the editor here at TFP, and has contributed to a number of international publications such as Cinema Scandinavia, PopMatters, and Room 101 Magazine. He can also be found listening to podcasts, researching topics he has little use for, or running after a city bus.
You might also like
Hirokazu Koreeda

by Zack Miller on July 6, 2014
Here’s what’s new to Netflix Instant for the week of June 30. Top Picks Invasion of the Body Snatchers (1956) Directed by Don Siegel Expertly playing on the deeply ingrained societal fear of communism in America during the Cold War era, “Invasion of the Body Snatchers” has earned a well-deserved place as a staple of […]
comments
Leave a reply
Add Comment Register

END_OF_DOCUMENT_TOKEN_TO_BE_REPLACED
Taylor Sinople Picks: The 16 Best Films of 2016
Form and Function in Alex Ross Perry’s “Queen of Earth&...
Digging for Fire and Unexpected: Husband and Wife Process Parenthoo...
Every Thing Will Be Fine 3D Review