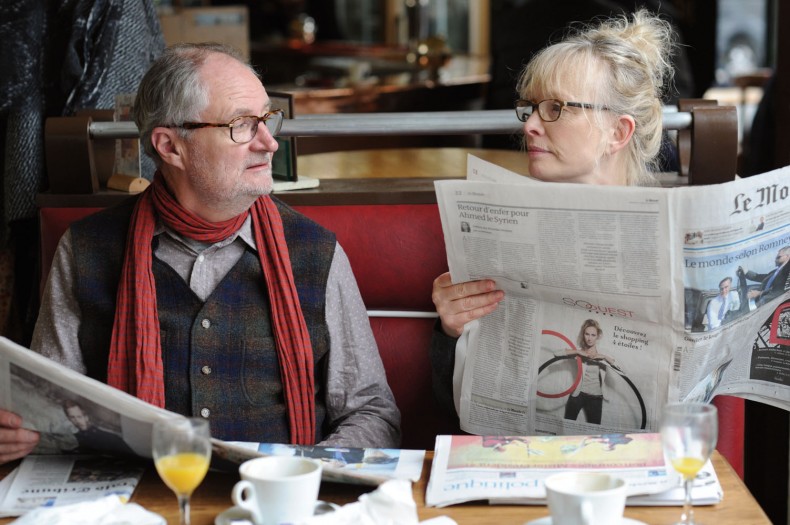 Anchored by a strong screenplay and wonderfully human performances from Jim Broadbent and Lindsay Duncan, “Le Week-End” is a mature and honest depiction of love after thirty years of marriage.

A Paris-set rekindled romance tinged with pain and humor? A bit like shooting fish in a barrel, for me anyway. From the charming trailer that snaps together a series of quirky one-liners and whimsical romance, “Le Week-End” may look to be a romantic comedy for grown-ups. And it is. But it’s also a film that’s not all that interested in the structure that the label implies. Instead, “Le Week-End” captures the in-between. The moments of recovery after a fight and before a make-up, the way love can cement itself even if romance has faded. Drifting apart. Living down your own contradictions. Romance and comedy, yes, but also revelation, reflection, and sadness.

Nick and Meg’s trip is dead on arrival. The cramped, beige hotel room they’ve booked for their thirtieth anniversary return to Paris revolts Meg (Lindsay Duncan), so she drags Nick through the city (Jim Broadbent) to find something a little grander. They end up in a prestigious suite with a balcony overlooking the Eifel Tower – an upgrade that worries Nick even if Meg won’t let the thought of money deter her plans for weekend adventure. They hunt down the perfect cafe, visit the landmarks, and dine-and-dash on an expensive dinner, but there’s just not much spark left.

They harshly attack each other about sex, their children, and their future as a couple. Unbeknownst to Nick, they’ve been drifting apart as people for years now. Nick has been asking, “What have I done with my life?” while Meg is thinking, “what will I do with my life?” In the freeing, utopic space of tourism, everything is put out on the table almost literally at a dinner party hosted by Morgan (played by an absolutely electric Jeff Goldblum), an old friend that kicks up some of Nick’s youthful and unfulfilled ambitions.

Jim Broadbent and Lindsay Duncan (respected actors that see far too few leading roles) capture the most believable on-screen relationship of the year with deeply embedded quirks that seem to come from decades of experiences together. They are as fond of little, romantic moments as they are of brutally criticizing each other. We come to understand that whether it be a peck on the cheek or a verbal slap to the face, it’s all part of their complex, living relationship. Broadbent has never worked in a more sincere, vulnerable space as an actor – totally capturing the experience of having a bad time amongst happy people when he runs into Morgan’s teenaged son in the back room of a party and strikes up a bond with the boy over their shared sense of rejection. His best trick is to build an emotional realization (“why doesn’t anyone want my company?”) and then burst out laughing at the sadness of it. It all comes to a head in a triumphantly human, self-condemning monologue that is matched only by Duncan’s reactions throughout the film that, often without words, convey the well of on-going arguments, jokes, resentments, and memories that come with marriage.

Roger Michell (who is better referenced for his earlier work such as “Notting Hill” than the more recent “Hyde Park on Hudson”) directs “Le Week-End” with the on-the-go freedom of a much younger filmmaker. Michell is paired with screenwriter Hanif Kureishi, an English playwright and novelist. The fusion of theatre and cinema, genre aside, is similar to something Martin McDonagh (“In Bruges,” “Seven Psychopaths”) can accomplish by grounding brilliant, stage-ready dialogue with the use of a camera’s distinct emotional and organic capabilities.

“Le Week-End” is another home run from Music Box Films. It gives us a glimpse of what we might expect from an eventual volume of Richard Linklater’s “Before” series. If there is one fault, it is that Michell too fully relies on the viewer’s reading of Godard’s iconic dance scene in “Band of Outsiders” – a moment crucially reproduced by Nick and Meg without much explanation. Still, “Le Week-End,” at a brisk 90-minutes, quits as its ahead and will leave your pants charmed off with a memorable and outstandingly human portrayal of the rarely contrived late-life romance.

Taylor is a Chicago-based writer and aspiring film historian. He is the editor here at TFP, and has contributed to a number of international publications such as Cinema Scandinavia, PopMatters, and Room 101 Magazine. He can also be found listening to podcasts, researching topics he has little use for, or running after a city bus.
You might also like
Jeff GoldblumJim BroadbentRomance

by Taylor Sinople on March 11, 2014
Elaborate, symmetrical shots, pastel colors, and oh my god, the vintage costuming. If this, with a crazy look in your eye, is how you’d eagerly describe a Wes Anderson film to a non-believer (probably while shaking them by the shoulders and begging them to go straight home and watch “Rushmore”), then you’re going to be […]
comments
Leave a reply
Add Comment Register