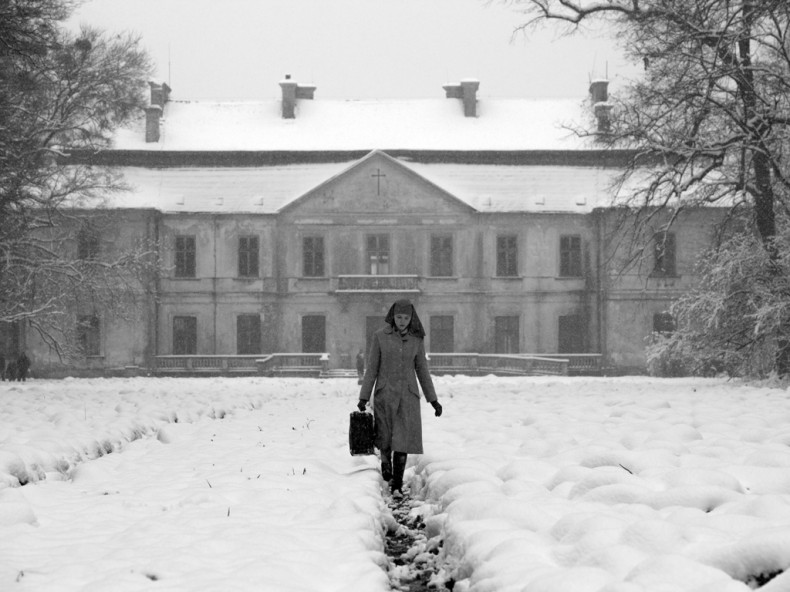 In "Ida," Pawel Pawlikowski uses stunning black and white photography to capture an evocative, simple story about self-discovery and regret.

A collection of still frames from “Ida,” pulled at random, could tour the world as a renowned photography exhibit. Pawel Pawlikowski and his two cinematographers photograph this eighty-minute masterwork in gorgeous black and white images that eerily capture the understated narrative of a young nun’s self-discovery in 1960’s Poland.

Anna (Agata Trzebuchowska) was raised in an orphanage after her parents were killed in World War II and Wanda, her Aunt and only surviving relative, refused to take her. Weeks away from taking her vows at a convent, the elder nuns send her to reconcile with Wanda (Agata Kulesza), a once-respected judge for the Communist party who now has succumbed to alcoholism and some unknown and damning guilt.

Regret, guilt, fear – this is a story that deserves the solemn evocation of black and white. “Ida” lives in monochrome, and, like the best modern uses of the format, we don’t feel any loss from the absence of color, only benefit. There are so many beautiful values in every shot – a white car drives down a street lined with trees that range from black in the foreground to a fuzzy light grey in the background: skilled utilization of aerial diffusion.

More impressive is the unconventional use of frame. Ryszard Lenczewski (Pawlikowski’s regular DP) was on the film as cinematographer for ten days after which Lukasz Zal (a documentarian) took over. This switch is seamless. Both shooters use the frame lines as simple guidelines – edges of the image, not the entire world. Camera composition best practice has, for a century, instinctively stated that the full character must be situated politely within the frame with breathing room before the image breaks off at the frame’s edges. If they are being cut off, you move the camera, or you move the character. Here, we’re offered challenging photography that doesn’t always play by these rules. The most unusual compositions place Anna on the very bottom of the frame, with only the top half of her face visible. The rest of the entire frame (already excessively tall thanks to the 4:3 aspect ratio) is left open as if framing God looming over her, demanding the extra space.

During her visit with Wanda, Anna comes to learn the truth about her past. Her name is Ida, she is Jewish, and her parents were killed while in hiding during the war. Their burial sites were never found, but Wanda offers to take Ida to the home that the family once hid in twenty years ago, warning her she may “discover there is no God.” From there, Pawlikowski’s film functions as a sort of missing person mystery. Ida and Wanda search for information on their deceased relatives, and Ida runs into a traveling saxophonist (Dawid Ogrodnik) that lives the life she will be turning her back on forever when she takes her vows.

“Ida” doesn’t just sell its 1960’s period; it actually feels like a film from that time. It’s uncanny; forget lavish production design and costume work – this is the best period piece of the year. A jazzy score primarily featuring Coltrane draws a second comparison to early Bergman on top of the expressive imagery that feels like a resurgence of Rossellini. Today, this kind of thing is both celebrated and doomed as the respected and feared “art film,” but that tag may mistakenly imply a glacial pace. Ida is living in an extremely liminal space as she prepares to commit to the life of a nun, and these high stakes give the film a commanding momentum that simmers beneath Trzebuchowska’s stoic, soft-spoken performance. Ida gets a few eye-opening glimpses to life outside the convent, but Wanda, an intensely damaged woman, struggles, too, with Ida’s clear-cut presumptions of “right” and “good.” And for that, this 1960’s-set, 1960’s-style film is wonderfully relevant to 2014 audiences.

Taylor is a Chicago-based writer and aspiring film historian. He is the editor here at TFP, and has contributed to a number of international publications such as Cinema Scandinavia, PopMatters, and Room 101 Magazine. He can also be found listening to podcasts, researching topics he has little use for, or running after a city bus.
You might also like
Agata Kulesza

by The Focus Pull Staff on December 30, 2014
A pregnant comedian, a nightly news producer, the daughter of a washed up movie star, a 3,000 year old vampire. Women in supporting and leading roles captivated on-screen in 2014. To celebrate such a great year at the movies, we polled over a dozen of our contributing writers and editors to produce this aggregated alphabetized list […]
comments
Leave a reply
Add Comment Register

END_OF_DOCUMENT_TOKEN_TO_BE_REPLACED
Taylor Sinople Picks: The 16 Best Films of 2016
Form and Function in Alex Ross Perry’s “Queen of Earth&...
Digging for Fire and Unexpected: Husband and Wife Process Parenthoo...
Every Thing Will Be Fine 3D Review