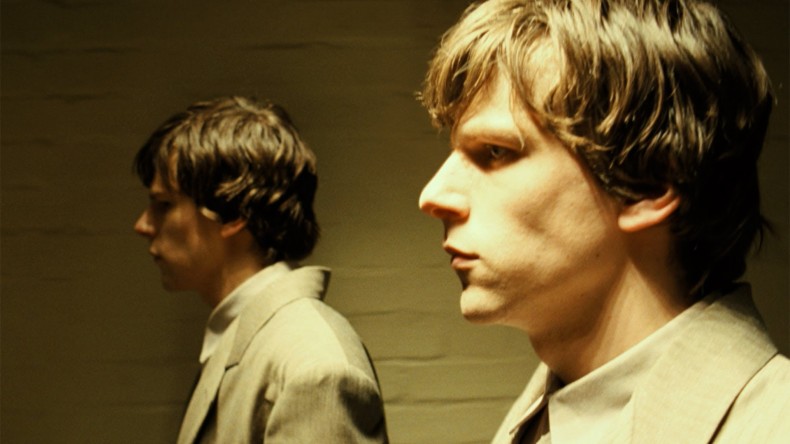 With a phenomenal dual performance from Jesse Eisenberg, “The Double” challenges the concept of identity with a grab bag of cinematic references that work surprisingly well together.

If there is one thing that bugs Director Richard Ayoade about his latest film “The Double,” it is the Terry Gilliam comparisons. While drab work environments and dark humor may seem similar, the real parallel is their form of grab bag cinema, literature, and musical references. Even then, “The Double” is nowhere near as ribald as Gilliam’s best. This isn’t to overlook that the film is a confident mixture of elements likely to give cinephiles and intellectuals plenty to dissect for years to come.

The story follows Simon (Jesse Eisenberg) as he spends his days working in a poorly lit office with coworkers who don’t recognize him. The elevator doesn’t work and he can’t do anything without raising suspicion. This is until James (Eisenberg) arrives and steals his thunder by being more outgoing and impulsive. James even helps Simon become more sociable and helps him get coworker Hannah (Mia Wasikowska) to date him. However, as James gets more respect, Simon becomes more jealous and the story turns to psychological turmoil between the doppelgangers.

Much like the film’s major theme, the locations have no distinct identity. Simon wanders through an environment of poorly lit, mechanical sets dressed in muted colors. The lighting is often sickly yellow and only uses bright, rich textures in triumphant moments. The world is claustrophobic. This is all reflective of Simon’s defeated nature. Along with a romantic subplot, the story attempts to explore the psychological motivations of man’s existence in society akin to a postmodern update of “The Apartment.”

It also reminds us of Eisenberg’s acting potential. Despite wearing the same oversized suit, each character has a definitive visual personality. Simon is the more nuanced, quiet Eisenberg that cornered him into Michael Cera comparisons. James is a con man telling dirty jokes and making acquaintances with ease. This side reflects the maniacal, magnetic Eisenberg that we haven’t seen much from since The Social Network. More impressive than the rotoscoping that created the dual effect is watching Simon and James arguing in the same frame. In the span of a minute, the actor’s range is shown with enviable ease. Both roles are so defined that they hardly seem like the same actor.

The rest of the cast is rooted in a strange, dark comedy where people carry weapons and disinterested in their jobs. Wallace Shawn shines as James’ boss who exists only to insult James. Every supporting character has a brief moment that impacts the film and adds universal weight to the tone. There is a morose charm running through each performance.

The film isn’t defined by a specific genre. Conceptually, the environment is a dystopia with reliance on outdated procedures, yet that is the extent of the sci-fi elements. Its lighting hearkens back to film noir of the 50’s with many scenes shot in the patented mini-blind shadows used to define deep internal guilt a ’la “D.O.A.”. It also has faint traces of being a romantic comedy. Then again, the lack of definition is the film’s beauty, meshing everything together into a beautiful, confusing portrait of the indescribable.

The soundtrack is also its own illustrious creature. On the surface, the choice to go with Japanese and Korean pop songs by Kyu Sakamoto and Kim Jung Mi is at first confusing yet romantic. Meanwhile, Andrew Hewitt’s score makes less sense conceptually. Many compositions are built from repetitive patterns in character’s footsteps or machinery used in a whimsical manner. There are also three major motifs referencing different genres of music composition. First is the goofy sci-fi synthesizers meant to indicate imbalance in environment. This is followed by heavy use of manic orchestral strings (similar to Bernard Herrmann’s “North by Northwest” score) that connects characters to emotional tension. Then the classical, thudding piano (based off of Franz Scubert) comes towards the end and plays like a beating heart, reaching the core of the characters. Its execution feels like a revolutionary mash-up spanning centuries of references in an attempt to make a defining statement about humanity.

Above everything else, the use of sound is the most effective tool. Borrowing elements out of Fritz Lang’s “M,” the film has an absence of audible reverberation to familiar actions. It helps to make things unnerving while allowing the audience to interpret James’ inner thoughts. What is emphasized outside of dialogue and score is the physical violence, which is comically altered with exaggerated sound effects. Much like the rest of the film, the sound that follows doesn’t quite fit. However, it provokes thought as a result.

“The Double” is a phenomenal film that questions the limits of cinema and then attempts to challenge it. The entire film is a physical playground of unexpected moments tied together with a definitive statement about identity and self-worth. It is audacious and helps to cement Ayoade as one of the most promising directors of right now. He doesn’t so much tell us a story, but forces us to see it in new ways through the alteration of sound, visuals, and narrative. It doesn’t entirely make sense, but like the best films, it gives us an excuse to watch it over and over.
Continue Reading Issue #3

END_OF_DOCUMENT_TOKEN_TO_BE_REPLACED
Taylor Sinople Picks: The 16 Best Films of 2016
Form and Function in Alex Ross Perry’s “Queen of Earth&...
Digging for Fire and Unexpected: Husband and Wife Process Parenthoo...
Every Thing Will Be Fine 3D Review