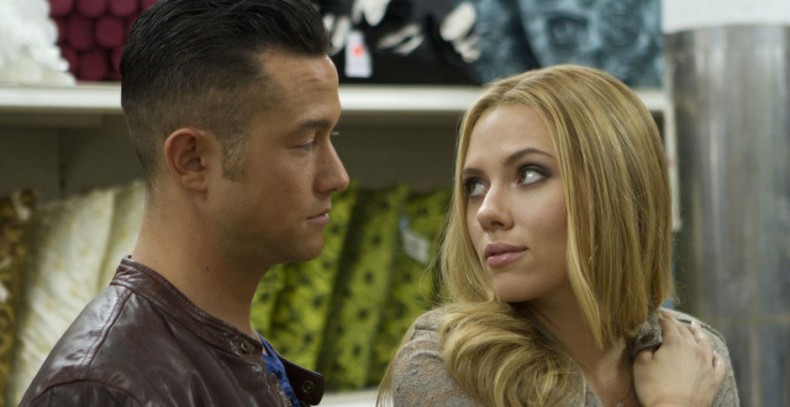 Joseph Gordon-Levitt’s debut feature “Don Jon” is a stylistic sex dramedy with a decent point to make; it intrigues but fails to satisfy.

When Joseph Gordon-Levitt’s directorial debut was announced, the last thing I expected from one of the most charismatic actors of the generation is “Don Jon” – a super-edgy sex comedy that’s stylistically well-made but considerably rough around the edges when it comes to flawed plotting and unlikeable characters. Date-nighters beware: with tons of on-screen, just barely-censored pornography and the frequent, casual objectification of women; this is a far cry from the lovable man-boy romances of Joseph Gordon-Levitt’s past.

“Don Jon” is a pretty funny twist on sex comedy that ditches wacky situations in exchange for smarter, dialogue-driven humor. Jon and his boys are obnoxious when rating girls at the club in several dated “number scale” bits, but their over-the-top banter pushes the envelope far enough to be a strangely watchable kind of shocking that exposes the crucial differences between inner and outer beauty. Clever touches are sprinkled in to create fantastic visual comedy – at one point Jon is left high and dry by Barbara, mid-impassioned kiss, and he’s left in a bedroom standing alone next to a “Titanic” movie poster.

It’s made clear in the opening scene of “Don Jon” that Jon, as a character, isn’t like anything we’ve seen from Gordon-Levitt before. From the shy quirks of “500 Days of Summer” and “50/50” to more dramatic roles in “Lincoln,” “Looper,” and “The Dark Knight Rises,” the one through-line to Gordon-Levitt’s persona has been a glowing likeability. This is replaced here with outlandish objectification of everything from his car to the women that rotate through his bed. The idea is genius – what better way to portray a repulsive character than to use an actor with a well-established history of charisma? While the warped tactic works brilliantly on paper and in the first act of the film, “Don Jon” ultimately fails to strike the right kinds of irony to excuse the vulgar trappings of the graphic dialogue. When Jon finally comes to those inevitable understandings about the errors of his ways, his transformation isn’t nearly compelling enough.

On the cast, Tony Danza gloriously hits it out of the park as Jon’s wife-beater-wearing all-Italian father that’s still coming around to a general understanding of TiVo and doesn’t want it pointed out. While Jon’s bonehead friends are given several sequences of lengthy dialogue, Brie Larson is criminally underused with only one line in the film. Scarlett Johansson is similarly underutilized as a glorified hot chick. Her one-dimensionality is designed to serve a point in the story, but nonetheless places a virtually flat character with little motivation or depth on-screen as the central love interest for most of the film. Much of the depth seems to be given instead to Julianne Moore in her small, refreshing supporting role as an unlikely acquaintance to Jon. Moore is known for playing strong women (“Children of Men,” “Boogie Nights”), but is anything but in control in “Don Jon” and is, in fact, the only glimmer of heart in the midst of this shallow gang of characters.

Any story about addiction involves darker implications, and sex being the “fix” is a significantly modern issue. All the more important that it’s given its share of dramatic weight, but unlike Steve McQueen’s brutal and powerful exposé of sex addiction “Shame,” Jon’s experience with dependence is a joke that uses the relapse stage of Jon’s porn addiction as a punch line. Any free moment in Jon’s life and (boom¬) the laptop is turned on to the blaring sound of the Mac boot-up jingle — the sudden burst of the sound effect becomes a running gag. Whether that’s distasteful or lighthearted is up to the viewer – and therein lies the biggest problem with Gordon-Levitt’s first feature: it’s on the fence. It could work for some; it definitely won’t for others. While “500 Days of Summer” is a sweeping romance and “Shame” is a dark examination of addiction, “Don Jon” is neither, falling into a murky middle ground that intrigues but fails to satisfy.

Gordon-Levitt exhibits some powerful control of presentation. As Jon cycles through his week – gym, apartment, church, mom and pop’s – the film finds a distinctive rhythm. None of these locations are particularly interesting to look at, but the way they’re edited together in montage make for some of the most enjoyable sequences of the film. Jon’s weekly time in the confessional booth at church serves as the punctuation to the plot’s larger sequences; the fact that we keep coming back to it to check in with the silent priest feels structurally sound. It shows that Gordon-Levitt as a filmmaker understands his story at a deeper level, and is striving to create something cinematic. Why he chose this story is beyond me.

Taylor is a Chicago-based writer and aspiring film historian. He is the editor here at TFP, and has contributed to a number of international publications such as Cinema Scandinavia, PopMatters, and Room 101 Magazine. He can also be found listening to podcasts, researching topics he has little use for, or running after a city bus.
You might also like
Brie LarsonJoseph Gordon-LevittJulianne MooreScarlett Johansson

by Taylor Sinople on September 25, 2013
Grace, a twenty-something supervising staff member at Short Term 12 – a facility that houses at-risk teens for periods of 1-12 months – lovingly struggles with her day-to-day responsibilities at the foster-care center while grappling with a troubled past of her own that’s hindering the progress of a romantic relationship with her co-worker Mason (John […]

by Taylor Sinople on July 25, 2013
It seems to be the year that Hollywood comes-of-age once again. John Hughes would be proud to see this summer season’s slew of distinctive, well-made films about teens and all of the accompanying parental oppression and youthful glee. The genre has turned out a variety of films this year: quirky, sincere, bizarre, and even poetic. […]
comments
Leave a reply
Add Comment Register

END_OF_DOCUMENT_TOKEN_TO_BE_REPLACED
Taylor Sinople Picks: The 16 Best Films of 2016
Form and Function in Alex Ross Perry’s “Queen of Earth&...
Digging for Fire and Unexpected: Husband and Wife Process Parenthoo...
Every Thing Will Be Fine 3D Review