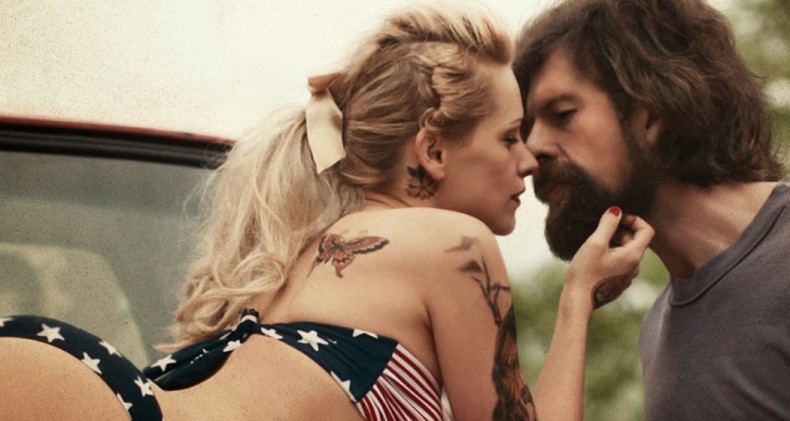 Painful as it is to experience the raw and heavy emotions of parents of a dying child, “The Broken Circle Breakdown” is a thoughtful, honest experience that uses a non-linear structure and bluegrass music as sources of originality.

Leave it to a film called “The Broken Circle Breakdown” to master the broken timeline approach to storytelling. This humble, emotional then-and-now musical romance is nominated for an Oscar this year for Best Foreign Language Film.

Like “Blue Valentine,” an American spiritual counterpart, the nonlinear approach in “Broken Circle” pings us back and forth between two periods of time in Didier (Johan Heldenbergh) and Elise’s (Veerle Baetens) relationship as lovers and eventual parents. Their early days of exuberant youth spent in the backseat of cars and in front of bonfires eventually give way to a bitter, disillusioned present. But rather than love’s decay being the instigator of their growing divide, it’s their seven-year-old daughter’s losing battle with cancer. The injustice of the sickness robs them of their spirit and leaves them asking, in the titular 1907 Christian hymn that appears several times in the film:

Will the circle be unbroken
By and by, by and by?
Is a better home awaiting
In the sky, in the sky?

The one constant in Didier and Elise’s timeline is bluegrass music. The role of sound itself is in constant flux. Key scenes cut out sound altogether, while others allow the music to do the talking when there’s nothing left to say. Who knew that American folk and bluegrass made such an impact in Belgium? Didier has had a long-time love for Americana (his daughter is later named after Maybelle Carter) and plays with a small band in clubs and bars – its one of the very first things that draws in the beautiful, heavily tattooed Elise. She eventually joins the band and the couple plays together with no reservation of heart or soul throughout the entire film. The unique texture of thumping upright basses, clanging banjos, sharply struck violins, and stomping boots complement every moment of these people’s lives. Here we are just three months after “Inside Llewyn Davis,” being moved again by the power of music and its role in our lives.

A religious debate is at war in the background of “The Broken Circle Breakdown”. As Maybelle’s condition worsens, Didier (an outspoken atheist) becomes obsessed with the stem cell research that could save his daughter if it weren’t for the religious zealots in the U.S. government holding back funding. Meanwhile, Elise turns to spirituality for comfort and to prepare her for the worst. As their approaches to Maybelle’s terminal condition underline their previously subtle differences as people, resentment sets in. This tormented present advances parallel to the earlier times when they could spend the whole night on the hood of Didier’s pick-up truck.

Director Felix Van Groeningen holds the remote control and skips scenes forward and backward in time to make connections between past and present. There’s a great pleasure in being casted around a decade’s time where thematic structure favors chronology. Touching, technically inventive moments crop up through this breaking of the typical form. The camera work (done by Ruben Impens, who works with a variety of lighting scenarios and color palettes) and music (recorded by first-time composer Bjorn Eriksson) are all put in place to allow the crosscuts to captivate and surprise. Some sequences are first visited only briefly – we see Didier driving at night, crying, with lights flashing in front of him – but it’s only until later that context is added to this scene so that we’re able to see the full picture. It’s not an entirely original effect at this point in cinema history, but it does serve to engage and prompt interaction between viewer and film, which is always a really good thing.

Johan Heldenbergh and Veerle Baetens in their first lead performances will be rarely equaled this year in their piercing, human performances of high-intensity emotions. They make this film work, period. Bravo to their daring, total dedication to the material. Between Didier and Elise’s grief over Maybelle’s (Nell Cattrysse) illness and their ensuing romantic breakdown, there’s truly not much more pain that can be brought to the screen. Again, near the end of the film, the thematic overture “Will the Circle Be Unbroken?” played by Didier’s band, backs this fantastic, heartbreaking experience:

One by one their seats were emptied.
One by one they went away.
Now the family is parted.
Will it be complete one day?

Taylor is a Chicago-based writer and aspiring film historian. He is the editor here at TFP, and has contributed to a number of international publications such as Cinema Scandinavia, PopMatters, and Room 101 Magazine. He can also be found listening to podcasts, researching topics he has little use for, or running after a city bus.
You might also like
Felix Van Groeningen

by Taylor Sinople on February 23, 2014
Take half the stately period drama (but none of the enjoyment) of “The Kings Speech,” a generous helping of the illicit affairs of “Fatal Attraction,” and a pinch of romance with “Twilight”-level depth, and condemn it all to the dreariest sound stage in England and you’ve arrived at “In Secret”: an ode to passionless filmmaking […]
Comments
Leave a reply
Add Comment Register

END_OF_DOCUMENT_TOKEN_TO_BE_REPLACED
Taylor Sinople Picks: The 16 Best Films of 2016
Form and Function in Alex Ross Perry’s “Queen of Earth&...
Digging for Fire and Unexpected: Husband and Wife Process Parenthoo...
Every Thing Will Be Fine 3D Review