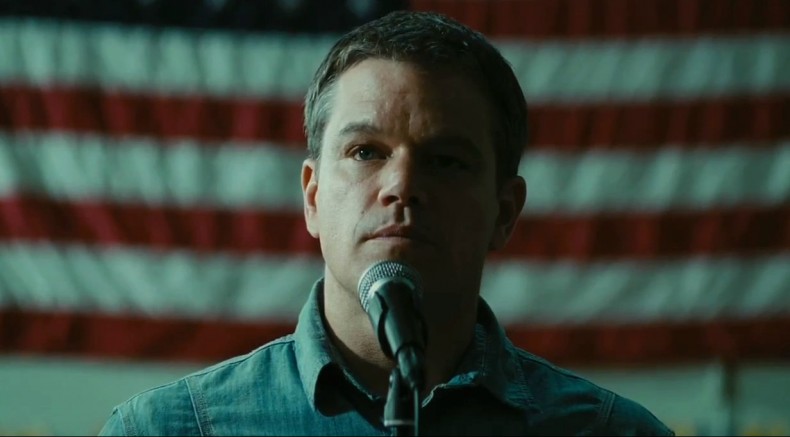 Gus Van Sant’s latest film of controversy is Promised Land: a finely acted, authentically told drama about a big-game natural gas company rep that returns to his small-town roots to lease land from farmers for drilling.

The process is specifically called “fracking” – the fracturing of subterranean rock layers to retrieve fossil fuels. Fracking has become a hot-button issue in recent times with the release of the documentary that challenges the safety of the process, GasLand. While the issue is an important one, it’s a shame that Promised Land’s integrity had to be roped into the back-and-forth. The film is a pretty good one. A strong, dramatic story confidently told with top-of-the-line performances soured only by a misplaced ending.

Giving one such excellent performance is Matt Damon playing Steve Butler, a successful representative from Global Crosspower Solutions. Steve’s job is to travel with his dry-witted accomplice Sue (Frances McDormand) across the American countryside persuading landowners to allow Global to drill on their land that has been predetermined to be likely for fossil fuel activity.

Steve’s motivation largely comes from his experience growing up in a dying farm community – this sort of mineral rights purchase would have saved his parent’s farm. Steve doesn’t see natural gas as a controversy, he is offering a town their last chance at survival.

The farmers in the purposely vague “somewhere-in-the-Midwest, USA” town depicted in the film seem to see it this way too. When Steve and Sue first arrive at their assigned town it seems to be as easy as handing out free money. The town arranges a community vote searching for a unanimous decision, and they almost get it until one man, retired scientist Frank (Hal Holbrook), stands against fracking, citing his experience in engineering to have uncovered the dangers of such a process. The town is not convinced, and agrees to meet again in three weeks for a final vote.

In this time, grassroots leader Dustin Noble (played by co-writer John Krasinski) shows up with a personal story of how fracking destroyed his family’s farm – poisoning the water and killing the livestock. His compelling story and photographic proof of the damage left behind divide the town. Do you steer clear of something that might destroy the farm that has been in your family for generations, or take a large sum of money and forgo part of your moral integrity?

The ensuing competition between Steve and Dustin, and the entire town, feels genuine. The arguments on both sides ring emotionally true, and this is important to a film centered on and eventually taking a definitive stance on a political issue. Along the way, though, Promised Land does present both sides. In one heated conversation, Steve asserts, “If you’re not for natural gas, you’re for coal and oil”.

Matt Damon as Steve is outstanding in an understated performance that has legitimate development. Frances McDormand is playing to her strengths providing both the comic relief and maternal insight, and even John Krasinski is successful despite sticking largely to his comfort zone.

Gus Van Sant has always been successful in the arena of controversy with such films as Milk and Elephant. Here, too, he quietly and responsibly directs the action that is in many ways “based on true stories” albeit not directly.

Where things fall apart (and they do) is in the final act. Everything about Promised Land is muted, smart, and authentic – making the out-of-nowhere twist at the end one of the most odd experiences I’ve had in the movies this year. This unnecessary moment, in addition to Matt Damon’s final speech, allow the film to be written off as misguided. And I hate that, because it was so close to tackling a controversial subject with effortless tact.

In the end, yes, the film has a political agenda – but that agenda does not substitute or distract from what is a mostly well-made, entertaining drama. Barring the strange ending, Promised Land is a compelling example of how fictional drama can seamlessly blend with real-life issues and the ethos of the filmmakers.

Taylor is a Chicago-based writer and aspiring film historian. He is the editor here at TFP, and has contributed to a number of international publications such as Cinema Scandinavia, PopMatters, and Room 101 Magazine. He can also be found listening to podcasts, researching topics he has little use for, or running after a city bus.
You might also like
frances mcdormandgus van santhal holbrookmatt damon

by Zack Miller on May 24, 2014
In constructing a recent Top 10 list of modern directorial debuts, I found myself reflecting on what a first film can mean for the rest of a director’s oeuvre. There are numerous instances of currently active filmmakers, particularly those that could be considered auteurs, whose early work establishes them as unique and powerful cinematic voice […]
Comments
Leave a reply
Add Comment Register

END_OF_DOCUMENT_TOKEN_TO_BE_REPLACED
Taylor Sinople Picks: The 16 Best Films of 2016
Form and Function in Alex Ross Perry’s “Queen of Earth&...
Digging for Fire and Unexpected: Husband and Wife Process Parenthoo...
Every Thing Will Be Fine 3D Review